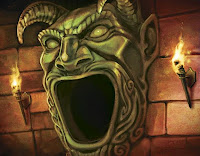 Greetings, denizens of Greyhawk! In time for Halloween, I bring you a feature that I haven't done since 2014: 7 More Spooky Greyhawk Locations! If you haven't seen the last list, check it out here. As before, I'm not covering the too-popular Tomb of Horrors. It's scary yes, but the secret is kind of out by now. Death traps. Great Green Face. Demi-lich, etc. No, I aim to show DMs that Greyhawk has many eerie places to set a spooky-night's adventure. Enjoy!

Crypt of Lyzandred the Mad: This 2nd Edition Greyhawk module is actually part two of the forgettable "Lost Modules" series (Star Cairns and Doomgrinder). Written by the capable Greyhawk scribe Sean K. Reynolds, the only thing scary about this module is the dozens of puzzles you'll have to solve to get through it. By the time you find the namesake mad lich of the crypt, you'll have wished your character was dying in the Tomb of Horrors instead. This is not to say the module isn't redeemable. If you have players who are indeed above murder hobo-style play, then give them a taste of Lyzandred. You have been warned!

Icespire: Not happy with the previous review? "Let it go." Instead I present a place of environmental and mental danger. This keep in the South Province sits on the rocky coast of Dunhead Bay and once served as a light house for vessels until one doomed day in 565 CY. Stories suggest the mage in charge of running the beacon was interested in forbidden lore he allegedly discovered in caves below the keep. Whatever he discovered, the effects were instant and deadly, as the keep and the all the land around for several miles were permanently changed into a frozen wasteland. The Herzog of the South Province sent men to investigate and only two returned, and both of them were driven insane. Even attempts to scry resulted in madness. The lands of Icespire, as it became known, is perpetually cold; so cold in fact, that normal protection does not suffice. In the spring and autumn months, storms rushing in from the Sea of Gearnat make travel along the peninsula of Icespire is impossible even for the most well equipped expedition.
Introduced in Ivid the Undying, this giant ice-blue shard overlooking the coast gives DMs and players a fun combo of problem-solving and investigating an eldritch horror. Is it a cursed artifact? A trapped god or elemental prince? A gate to another Plane? If so what creatures now lurk in the frozen wastes? Good luck finding out hardy heroes. 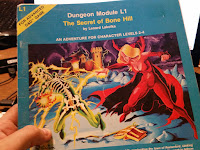 "Danger lurks in the Lendore Isles. Bands of evil creatures prowl the hills overlooking the town of Restenford, seeking unwary victims. Now you have come to the sleepy little village looking for adventure and excitement. You seek to fathom he unexplored reaches of Bone Hill and unlock the mysteries of Restenford."

I have personally never played the Secret of Bone Hill, and I only recently acquired it, but I do intend to run it someday. I dare you to as well!

Bronzeblood Haunt: The good Kingdom of Furyondy is not spooky is it? Well, no, because most of the dangers here come from outside its borders (namely Iuz or the Horned Society). There is one notable exception however; the ruins of a castle referred to as Bronzeblood Haunt. As the tale goes, there was once a sadistic nobleman who consorted with things like evil cults and vampires. Naturally, matters got so out of hand in this fief that the king had the guy deposed and his castle was razed to the ground. Even after this overthrow, the entire area was left with an overwhelming aura of evil. The land is noted for eerie mists and unnaturally blood-red bronzewood trees during autumn. So far, no knight or hero has dared to explore the cursed dungeons of this ruin. Oh yeah, did I mention the crazed noble was never caught? Bronzeblood Haunt is featured in the 2E accessory The Marklands. This location gives a DM a chance to place a custom dungeon-crawl within a stable kingdom and not be overshadowed by any published modules nearby. Happy hunting!

Fleichshriver: Within the dominated Bandit Lands is a foul citadel called Fleichshriver (translated, flesh penance?) consisting of bent towers, barbed walls and gargoylian decorations. Featured in the accessory Iuz the Evil, this is a garrison for Iuz's forces as well as a ghoulish laboratory for Boneheart members Halga, Jumper and Null. If there is a unique evil spell or cursed magic item created in this empire, Fleichshriver is where it originated. Jumper experiments with shadow magic and Halga dabbles in the negative material plane in this castle. Worse yet, reports say Fleichshriver has a gate to the Abyss itself where demons are summoned forth to serve the Old One. There is few places in the north more dangerous to venture into than citadel Fleichshriver. High level adventurers take note. To vanquish Iuz and his lieutenants, this fell place may have to be brought down first. Good luck!


Plague Fields: Speaking of Iuz the Evil, another depredation of the tyrannical demigod is the Plague Fields. This keep within the former Shield Lands and unbeknownst to the forces of evil who wrecked it, used to be a vault for a profane artifact belonging to Pyremius, god of murder. The unfortunate result of this keep's destruction was breaking the holy wards on it. Now, all life that gets within miles of the ruin slowly becomes poisoned and diseased. Very few are hardy enough to tread upon the Plague Fields and if they do, what are they looking for? Surely not the artifact within...

The Dead House: Labelled T5 in your City of Greyhawk boxed set; in the 591 CY supplement, Greyhawk, the Adventure Begins. The Dead House was formerly Madame Serena's Fortunetelling. Venerable Madame Serena was of course one of those legitimate seers who had way too many cats and no one in her will. Rumors in the city, mainly from beggars who tried to sleep here, say that Madame Serena's ghost (or something) haunts this house. They hear stuff moving and voices talking. Priests have even investigated, but have found nothing to exorcise. This is a good location for DMs to pit their players in the iconic movie trope of staying the night in a haunted house. Is Serena's ghost harmful or helpful? Is it a poltergeist or something worse? Oh, and what hidden treasures did the fortune teller leave behind?

Isle of Lost Souls and Causeway of Fiends still top my lists! :D

L1 The Secret of Bone Hill is fantastic! It has some amusing locations (like the Church of the Big Game) and is very similar to Keep on the Borderlands, in that it is almost a mini campaign setting. This is one of 24 published modules on my Campaign Wall of Fame! Chatting with Lenard Lakofka about it is a cherished memory!

Gorsumba: Wall of fame, interesting idea! Len Lakofka, cool. Where did you meet him?

Mike, I have been corresponding with Lenard over the last few months via email and FB messenger. He has sent me some of his old topography maps and data sheets he has put together to see if I can incorporate them into my campaign. I had invited him to guest play in my game on my stream, and he accepted, but he is a VERY hardcore stickler for 1E rules only it appears lol. We shall see if I can get him to relax on that and just enjoy playing a game with other Old Schoolers lol.