Ring of Five Questions: Round 1 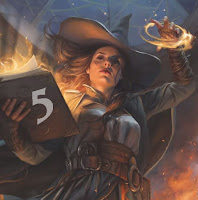 Welcome back Greyhawkers. As promised I'm going to get the community involved by bringing back my Ring of Five Questions column. Looks like I've had some good responses so far too! Some people gave me short but excellent answers, while others offered more explanation and insight to their choices. I love it all. Some people even got over-anxious and just posted to me in comment sections on the blog or on Facebook. So against my own plans, I'll do a warm up post with some of these fans first. Reminder in case you are just now finding out, if you'd like to try out my five Greyhawk questions and share with the community, check out this link to the previous Return of the Ring of Five Questions post and then email me at mortellan@gmail.com with your responses. Now let's enter the Ring and see what is on our fellow Greyhawk fans' brains:
To start us off is some first time posters on Greyhawkery, drizzt ze'urden, Anonymous, Raymond the Scot and Fozzy21 who all chimed in with some good answers.
Q1. What is your favorite realm or region in the World of Greyhawk setting?
drizzt: Hold of Sea Princes
Anonymous: Shield Lands
Raymond: At the moment, post-war Great Kingdom
Fozzy21: Furyondy
I love all these answers. I enjoy the Sea Princes mostly in my own campaigns, whereas the other three have mainly been used for war scenarios over the years.
Q2. If you could actually be one Greyhawk deity which one would it be?
drizzt: Fharlanghn
Anonymous: Heironeous, kicking evil butts!
Raymond: Olidammara
Fozzy21: St. Cuthbert
Again, four solid choices. This Anonymous fellas definitely would be on the offense going after evil. In general these are all decent, well-known deities that I'd like to share a drink with at a bar.
Q3. You have one wish. Which Greyhawk module or accessory would you do over or fix?
drizzt: Five Shall Be One
Anonymous: No do overs, they are all good as they are. Instead, maybe add extra ones for the unexplored areas?
Raymond: The Doomgrinder. What a disappointment.
Fozzy21: S3 (Expedition to the Barrier Peaks)
Alright! We got a good variety of answers here. I agree with drizzt again and have indeed reworked FSBO for my Sea Princes Campaign. Anonymous throws down a pretty good gauntlet that we should look forward and bring new stuff to the table. Yes indeed! Raymond echos all our disappointment with this creepy Carl Sargent creation. And Fozzy comes out to claim S3 needs to be put in its place (wrong genre?) or perhaps just updated to modern RPG sensibilities. Who knows? Moving on...
Q4: You're putting together an all-star Greyhawk NPC group. Who is your number one pick?
drizzt: Tasha
Anonymous: Mordenkainen
Raymond: Reydrich of Ahlissa
Fozzy21: NPC Group: The Slave Lords
I like that when talking Greyhawk or D&D in general we tend to favor the wizards. Mordy is always a must-have, Tasha (Iggwilv) is an old classic NPC, but now the new hotness in 5E and Reydrich is another wizard, not as well-known but one who has alot of potential for development given the events of post-war Flanaess. Raymond really likes his Aerdy. Naturally, Fozzy went with the whole Slave Lords. I can't fault him though cause I can't think of them by name (except Markessa), however they do seem like one collective bad ass NPC in a way. Now for the question that really gets to the fans' psyche...
Q5. If you could possess one artifact or relic from Greyhawk lore, which would it be?
drizzt: Axe of the Dwarvish Lords
Anonymous: Hand of Vecna
Raymond: The Mighty Servant of Leuk-O
Fozzy21: Boccob's Staff of the Archmage
drizzt has a noble heart, I don't think I've ever used that item. I wish I had now. Anonymous gives up his identity finally, he is the Archlich Vecna in disguise! Raymond has the most realistic ambition, in that I think Gundam/Battletech stuff is in our future lol. And Fozzy finishes off the Ring of Five Questions with a good one. If you could have one artifact, that one has to be the most reliable and versatile right?
Thanks to these four for replying in the comments section. Next round I will focus on some more new faces before I get into some of the more elaborate entries of people that I know in the community. Stay tuned and enjoy!
Posted by Mike Bridges at 7:08 PM

Well, they're interesting answers, at any rate.

Excellent. We need more of this ;)