Ring of Five Questions: Round 8 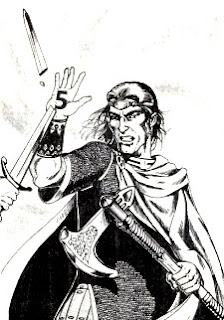 Hail Lords and Ladies of Greyhawk! If you've been following, yes indeed, this is already the eighth round of my ongoing Return of the Ring of Five Questions column! If you're seeing this column for the first time this is a community participation feature of Greyhawkery. Search back and read the previous installments then email me at mortellan@gmail.com with your own five responses. Remember, you can be as short or wordy as you like in these responses. Also, I will keep taking entries until the end of 2020 so hang in there, I will get your answers posted in a timely manner!
Let's go to the Ring for a triple-threat match! Please meet stalwart Greyhawk fans, Matt Mason, Erik Larson and the inestimable Michael "Zudrak" Gross. Now onto the questioning...enjoy!
Q1. What is your favorite realm or region in the World of Greyhawk setting?
Matt: I've started DMing Against the Slave Lords (starting with A0), so I've developed a strong fondness for the Pomarj.  Props to Furyondy for the coolest region name ever.
Erik: Verbobonc, particularly the little village an indeterminate number of miles away, where we kicked off our adventuring career. We were poorly mounted, badly equipped and had no large sums of cash...
Michael: My favorite region comprises the Gnarley Forest, the Welkwood, and Suss Forest; west to the Kron Hills (including the village of Hommlet, Verbobonc, and parts of Veluna) and Lortmil Mountains; south to the three Ulek states, the Pomarj, and the (Keep on the) Borderlands between them; north to The Wild Coast, Dyvers, and the Free City of Greyhawk; and east to the Cairn Hills and Abbor-Alz.
I'm jealous of Matt for running the entire Slave Lord series. I neve ran them, and parted out 2E Slavers then trounced the Pomarj in a series of wars. So, yeah I like the Pomarj too, I just misused it. Michael casts a wide net to include the dangerous Pomarj but also encapsulates the region for the Temple of Elemental Evil and the entire Greyhawk Domain of adventures. Can't disagree with that! Erik makes the first question somewhat unanimous by choosing Verbobonc which I know started many careers off in the World of Greyhawk. Let's move on, but first, I wanted to disagree on Furyondy being the coolest name, but damned if I can't think of a more original regional name on the map.

Q2. If you could actually be one Greyhawk deity which one would it be?
Matt: Boccob, so when someone says, "you think you know everything", I can say, "yes, yes I do".
Erik: I haven't really considered them all that much, to be honest, but since you ask, I'll go with Zilchus.
Michael: Heironeous. Lightning, a big axe, and fighting for Law and Good? Sign me up. :)
We got more variety on this one. Erik has no time for gods, but if he were one he better be rich and influential! Works for me. Matt goes for the top shelf as a deity. Being Boccob would be bad ass actually. Yes he knows everything, has every magic item and spell imaginable, and to all you lesser gods, too bad, he is the Uncaring. Michael however is heroic at heart going with Heironeous. He has alot of evil to vanquish and order to restore so who wouldn't like to have permanent iron-skin? By the way, I hated when 3E D&D changed Heironeous to using a sword, it was lame and generic. I guess players griped when their paladin couldn't find a Holy Avenger Axe?

Matt: WGS1 & 2.  All that hard work just to be told you started a continent-wide war.
Erik: The City of Greyhawk. I recently pulled that off the shelf after having read through the first few Gord the Rogue novels and thought: "It's not like this at all."
Michael: Tough question, because there are a few. Since I can only pick one, I choose The Temple of Elemental Evil.
Just when I think I'm done ranting about Five Shall Be One & Howl From the North, Matt brings them up again! I agree that these could be redone, except I think you were disappointed in the Greyhawk Wars that followed? I wanted that, but was mad the barbarians who started it off got left out of the main events! Erik meanwhile goes for the jugular and casts shade on a favorite of mine, the City boxed set. Really pal? Well, I must admit I didn't read the novels till way after I had the boxed set. Not sure how I avoided Gygax's novels for so long. I know the maps are a dividing line in fandom, but the content is something I've never seriously tried to compare. Moving on, Michael stays on track as this Heironean wishes to tweak the classic TOEE. I think as megadungeons go a DM can adjust it on the fly (especially a certain undead NPC). The outdoor stuff I would not change. And Return to the TOEE? Well, Monte Cook is great and all, but, pass.

Matt: See Q1 above. Gotta go with Turrosh Mak.
Erik: Lord Robilar, come on down.
Michael: Serten, since clerics are my favorite.
Let's keep the spotlight on Michael as this lawful good champion of the central Flanaess adds Serten to his NPC gang. That is on brand for him. Good cleric. One who fought at the Battle of Emridy Meadows as well! Erik, goes for another Gygax campaign classic in Robilar. Is there an NPC more divisive in fandom than him? I'll guess he likes the pre-Wars Robilar who was amoral adventurous not downright homicidal. I'd take him over most fighters in Greyhawk too. Matt finishes off number four with a call-back to question one, he loves him some Pomarj and no one unites those humanoids quite like Turrosh. Hm, I wonder who would win in a duel between Mak and Robilar?

Matt: Rod of Seven Parts.  Why settle for one when you can have seven!
Erik: The Mighty Servant of Leuk-O. I mean: what's not to like about a magi-tech mecha?
Michael: Johydee's Mask. As much as I like clerics, I enjoy sneaking and using powers of illusion to get past challenges.
Matt wisely takes the Rod of 7. As the Ring of Five Questions goes, this is like wishing for more wishes right? Matt shows he would make a good Boccob with that loop hole. Michael goes in a rare direction. So far no one has picked the Crook of Rao. I mean is there a more goody good item than that? I was sure, Michael the good aligned Heironeous and his pal Serten would go for that, but no he possesses Johydee's Mask? Sneaking and illusion he says. I guess that's okay since he said to get past challenges not create them (which is what my friends would do with it). Erik finishes off this epic Ring of Five round with the Mightiest relic of all, the Mighty Servant of Leuk-O. I agree, magi-tech mecha? This artifact is the most likely in all Greyhawk to actually be made IRL. My only gripe, is the MSoL large enough? Most illustrations I've seen make it large, but not mecha-large. I want something that can go toe to toe with the Doomgrinder - okay enough of that!
Thank you Matt, Erik and Michael. Good entries! Next round be ready for a curve ball. Stay tuned and see you again soon.
Posted by Mike Bridges at 7:46 PM

Shade on Greyhawk? Never! The boxed set made things seem a little shinier than the Gord novels did. I think I'd give it a bit more grit.

Concur on MSoL: it sounds more like a two-seater than a full size with the written dimensions.

Glad to see the excellent answers of others here and in the other installments so far!