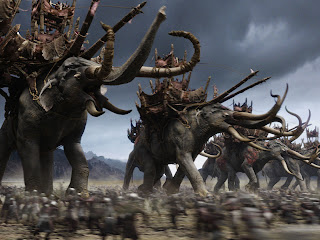 Belated cheers to the Professor on his eleventy-ninth birthday! Now moving along, this occasion has reminded me of a question someone started on of all places, the remnants of what is the Wizards of the Coast "Greyhawk forum". It was a good question that I've never seen discussed before so I decided to look into it. The question is simple; are there elephants used by any armies of the Flanaess and where can they be found?
My first impulse is no, there has never been mention of elephants used in the Greyhawk setting. But such imagery as the oliphants of Mordor's army attacking Minas Tirith in the Return of the King should've been too tempting to pass up for Greyhawk authors after all these years! Get ready for some contemplation and speculation as I go on an.... 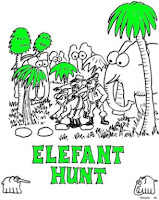 First off Tom Wham's mini game, Elefant Hunt in Dragon Magazine #88 is still one of my fondest memories of the publication growing up. If you want to go on a tangent check out this site.
Now, one of the posters on the Elephant thread smartly mentioned the Regional Products chart in the Folio/83 Guide of the Greyhawk Setting. This is a wonderfully under-valued "map" in that it shows with utter simplicity the major exports of the nations of the Flanaess. Ivory is one of the items listed and gauging which climate zone it is listed in you can pretty much guess which is elephant ivory and which is walrus, etc. Not surprisingly, the jungle continent of Hepmonaland has ivory while the Amedio Jungle to the west is left suspiciously blank on the subject. Zooming in on Hepmonaland, a search through the 2nd edition supplement, Scarlet Brotherhood shows that the resources of a few Touv nations is ivory (Kevot, Sharba and Lerga). Lerga's heraldic symbol is in fact the elephant, which is expected for a place named after the god of beasts Llerg. Further references in the book are encounter charts showing elephants being found in such far-away places as the Zolteo Jungle, Otobo Jungle, Adaro Forest and the Kabrevo Plains. The same rather publication goes into the Amedio Jungle but refers to no elephants at all in that region. All of these obscure places are of course no use in answering the original question, right? Ah, but I'm not finished!
The Regional Product map shows ivory in the cold north lands of Blackmoor and the Hold of Stonefist. It's a no-brainer that this is not elephant ivory, or is it? Consulting the official 2nd edition Greyhawk Monstrous Compendium encounter charts I found that elephants are predictably found in tropical or subtropical plains, scrub, hills and forests. But then lo and behold in the subarctic plain, scrub chart I found not only the vaunted Oliphant but also Mammoth or Mastodon! Subarctic forests, swamps and marshes contain oliphants as well. This is where the fun speculation starts.
The Scarlet Brotherhood has been all over the jungles gathering resources and have even been known to use Hepmonalanders as troops. Assuming elephants are used in war by Lerga, Kevot or Sharba it would stand to reason they could eventually be utilized by the Brotherhood's war-machine as a shock and awe counter for the heavy infantry and cavalry of the Flanaess. Transport would be their only concern, but like any evil nation bent on dominating the world, the Scarlet Brotherhood has magic!
To the north things get uglier. Full blown oliphants, mammoths and mastodons can conceivably be found in places like Blackmoor, Wolf and Tiger Nomads, Cold Marshes, Burneal Forest or the fringes of the Land of Black Ice. Should they be herded, trained and outfitted by a regional powerhouse like say....IUZ, well things suddenly go from bad to worse for the forces of good like Furyondy and the Shield Lands. Considering Iuz is a demi-god with armies of orcs, undead and demons, adding oliphants is the cherry on top if you want to run a Tolkienesque battle in the Flanaess. 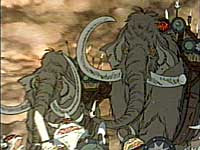 Hmm, I don't know if IUZ would truly bother with importing Oliphants from the northern lands. He has orcs, undead, & demons at his disposal.

Now, if there were some Northern realm, say within the Lands of Black Ice, that wanted to begin antagonizing the Flanaess they may have access to them. Could Iuz be hiring them as mercenaries, similar to Sauron using the Harad?

I love the image of a horde of northern barbarians led by mammoth cavalry. I can even see a recreation of Hannibal crossing the alps through the Griff mountains.

I believe that "elephant cavalry" would have to be imported by Iuz, and not just the elephants. Even in the case of Hannibal, the elephants were trained for war by people who had been doing such training for generations.

Could Iuz's minions learn to train elephants "over night?" I wouldn't think so.

But I think Iuz learning of "elephant cavalry" and moving some of his forces northward to bring these "people" under his sway -- as Sauron did with Harad -- would make for some awesome game play.

Where Sauron fails and Iuz succeeds if he owned oliphants is if Iuz's elephants die in battle, you know he will turn them into some kind of mean giant animated skeleton.

The "Hannibal" over the Griffs is a great thought. Maybe the Hold of Stonefist has been secretly raising mammoths? ;)

It's also worth noting that Gygax's Dragonchess game, played by Gord the Rogue and Cat Lord in Dragon #100, has Oliphant pieces.
That suggests that the central Flanaess has at least some knowledge of the species.

Brilliant find Armitage! Given the possible age of a game like Dragonchess, perhaps oliphants were more popular in the days of the Flannae?

In the news today:

Note to self: Why is this post SO DAMNEd popular? It routinely gets dozens of hits each week and is one of my oldest. People must really like Oliphants out there. Weird.

Update: The article still has legs! Four of them and a trunk at that.

Are there elephants in Greyhawk?

Not sure Josh. I'd say there is in the Scarlet Brotherhood because they could be imported from Hepmonaland. In the north, especially up in the Black Ice/Nomad region I'd place mammoths. Why not?