Ghost Tower of Inverness in 4e 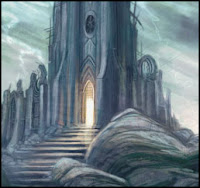 A friend of mine from the Portland area who works closely with his local Wizards' D&D Encounters program, pointed out to me their newest storyline beginning on February 9th. I'm not sure of the official title, but it has something to do with a "Phantom Brigade." Cool so far. Now I've never paid much attention to D&D Encounters, but when he told me this one involves the Ghost Tower of Inverness well, you know I had to check into it. Note: I'll try to hold back on the scathing condemnation of 4th edition as much as possible. I mean, I do play in a 4e homebrew game, but this is about Greyhawk classics being used in organized play so expect a little edge to my words.
For those who aren't aware, D&D Encounters is done at organized sites, like game stores. It's advertised as such:
"D&D Encounters is an exciting, weekly campaign that plays out one epic encounter at a time. As you defeat enemies, solve puzzles, finish quests, and perform heroic deeds, you’ll earn Renown Points that you can use to get exclusive rewards. Each session only takes 1-2 hours to play, so it’s easy to fit your game in after school or work. And each week there’s a new and exciting challenge. Jump in anytime!"

Easy enough. Not everyone has the time and/or luck to have their own home campaigns. In my estimation, this Encounters biz is a direct offspring of Magic the Gathering leagues and Living Campaigns. What about the Ghost Tower? Their ad says:

"Over sixty years ago, a group of bold adventurers calling themselves the Silver Company delved into a mysterious tower that appeared in the ruins of Castle Inverness. The result was tragic."

"Now, six decades later, an ambitious young cleric named Aldus Splintershield seeks to make a name for himself and his clan by founding a new town in the ruins of the infamous castle. And so he has hired you, brave adventurers, to guard against whatever perils may arise from such an expedition."

Hm. So its set in the ruins of Inverness, but not necessarily the Ghost Tower. I wouldn't bet against it though, because as D&D Encounters is a series of weekly, um, encounters then the story would awful bland if it was one attack after another in the same location. It is good to see that it isn't a rehash so much as a storyline extension of the original, sans any Greyhawk reference of course.

"So prepare yourself and guard against the worst. For in the Nentir Vale, the worst is always on the way."

The Nentir Vale as best as I can guess is the default world of D&DE. Is this the fate of Greyhawk material in 4th edition? To be dropped piece by piece into new settings such as Nentir Vale? Possibly, but more on that later. The organized play enticements are more eye-popping to me. Remember, I do play in a 4e campaign and in a game store no less. Yet, if I had to play it through D&DE each week, I'm not sure I'd be able to stick around for long. It's too many new tricks for this old dog:

First off there is the new Fortune Cards that Wizards is pushing for organized play (It's optional for home use otherwise). It looks like a must have if you're playing in D&DE. In fact, I'm fairly sure its a requirement in some cases to participate at stores. You build a deck of 10-30 cards (note that boosters are 8 cards each, you can do the math) and so it goes you draw a new card each round for some random element that can be played in combat.

" These cards give characters fun, temporary benefits that feel different from the benefits gained from powers and feats, without adding undue complexity to the D&D game."

As most 4e combats I've been privy to run longer than 10 rounds, you'll need plenty of fortune cards. As for complexity, 4e is already rife with complex feats and powers, so 10-30 more one-shot powers shouldn't be too much more to buff a character right? Okay, how about a buff for the buffs? Yes, there is also something called "Twitter Buffs" that further add complexity to the Fortune Card buffs. I kid you not.

Okay then! So now those with their smart phones handy at the game table can keep checking for special buffs while they wait for their character's next turn. I can barely stand that kind of distraction in home play but if it's integrated into play? Yikes. But that's not all! There is also Rewards and Renown Points.

"Players, as you progress through each season, you’ll earn Renown Points you can use to get exclusive Fortune Cards. Dungeon Masters, as a way of thanking you for your invaluable work, you’ll get exclusive game aids you can’t find anywhere else."

That's correct, earn points for a chance to earn more cards to improve your character so that he can earn more points and so on. That's incentive enough for the journeyman gamer. Hey and bring in a new player for 2 extra points! Wizards has this down to a science.


Anyhow, gripes about collectable card games aside, the parting out of Greyhawk in 4th edition continues. But really, it's only come full circle if you think about it. Sure, Greyhawk was originally Gygax's homebrew world but a lot of the classic mods that we associate with the published version were at first tournament modules written by other authors, that got pieced together into a nascent world that became 1st edition Greyhawk. So the fact Greyhawk classics like Inverness may be seeding new storylines in 4th edition is fine in essence. Greyhawk icons have stood the test of time and its easier to revisit those than create new ones. But from a setting legacy standpoint, there has to come a time when the Greyhawk is given the spotlight again, or else the next generation of gamers, whom I assume Wizards targets with programs like D&D Encounters, may never know that their favorite adventure spots, like Inverness started not with Nentir Vale but another obscure fantasy world.
Update: 4/25/2021: I added a link to the 4E adventure now only available on DMsGuild.
Posted by Mike Bridges at 12:48 AM

Heh! I just read the non-adventure parts of the DM's packet for this season of 4eE. We, (the DM & I) are both dismayed at the inclusion of the Fortune Cards, but the DM's info packet says that the Fortune Cards are 'recommended' but not 'required'. Twitter buffs? Hey, this is supposed to be a TABLE-TOP RPG, not a modded World of Warcraft online session. Grrrr.

What's next? Will WotC unveil their Facebook App for D&D? Oh, wait, they already did that a couple years ago, called "D&D: Tiny Adventures". It was fun, but I kept losing the app & I have yet to find the location for it on my FB page, what with FB changing every few months requiring me to go back in & customize my privac settings every time they do...

I'm beginning to think that Facebook and WotC are being run by the very same people, or a small cadre of people who want to merge the world of D&D RPGs and the interwebz together.

I for one, think that is a horrible way to socialize, and that is the reason I started playing every Wednesday in the game stores. Not because it is D&D4e, (I can barely bring myself to even call it D&D...) but because I like hanging out & playing with other gamers.

Oh well, my DM says he may severely restrict the use of the Fortune Cards at his game, as he thinks it will NERF the encounters, and he will probably institute a "No Cell Phone" rule at the table, NERFing the Twits.
:P
Game On!
Bobjester

Wizards of the Coast is returning to its roots -- a Card Game. Magic the Gathering all over again. They're out to destroy role-playing anyway they can.

I really don't think I'm interested in anything Wizards may come up with from now on. I would never find such gaming enjoyable.

Ah, but I long for the good old days.

Cards Pro:
Give stores a reason to have the game on the shelf. I know of a few that have scaled back RPGs in favor of comics and cards.

Cards Con:
Rewards unimaginative play and buys characters out of situations that actual role-play would have before.

Huh. From other blogs I've read recently on the subject of Twitter Buffs, apparently Wizards has been doing them since last year. At the rate I play catch up with technology, I fully expect to be on board with Twitter in another 5 years.

We played the first session of the new season of Encounters tonight, WITH the cards. The store owner came around & gave us all two packs to use.

There are rules to using the cards, (even ratio of Attack, Defense & Tactics in each players' decks, only play one card per round, discard, draw another for next turn, etc...) and try as I might, I couldn't see a use for them at all.

I don't think anyone else played, or even attempted to really play a card, but then again, we fought a flight of stirges and we did just fine without them.

The encounter was just right for the season opener, not too tough, and there was enough danger (mostly from our own piss-poor rolls) to make the encounter feel deadly enough.

One player kept rolling "1's" one right after another. He struck my character with arc-lightning by mistake right off the bat. XD
In the end, his PC (pre-gen Human Mage) was the one who nearly died.

This is the level of danger & uncertainty that I want in my D&D games, and I think the rest of the players would agree. I seriously doubt that we will use the cards next week, but I'll take mine along, just in case. No one will be buying any more of them, but a couple of Essentials books were sold to facilitate creating their own PCs rather than relying on the pre-gens. (As nice as these are compared to the previous seasons' pre-gens.)
:)

Doesn't sound like a bad encounter, Robert. Glad you guys had some fun. But it sounds like I won't be pursuing any of the card packs myself.

You make it sound as though my first "thought" was correct -- a return to their roots, sort of thing.

And I never did really care for pre-gen characters, though they have their uses in a pinch.

;) Well there is "returning to one's gaming roots" and then there is group dynamics. I've (paraphrased) it before elsewhere, and I believe it now: When 6 out of 7 at the table are old-school players, it doesn't matter what the rules are. Its going to be a good game. :D
Bobjester