Anyone who knows me well, knows I am quite a sports-maniac. This mania has even leaked into my D&D gaming. With that said, in honor of this year's Superbowl, I have gone into my Greyhawk Archives to find my notes on a rather unique period from my "Silver Age" 2nd edition campaign. Back in the 90's we gamed heavily around Greyhawk City; exploring Greyhawk Ruins, putting down the Temple of Elemental Evil and playing medieval rugby. Say what, you ask? Rugby in Greyhawk? Yes! It is slightly canonical too:

(Free City Arena) "About 200 years ago, Lord Mayor Zagig Yragerne and the newly founded Grey College joined forces to build a great arena in which student assemblies, sporting events, public entertainment, and so forth could be held."


"The arena can seat about 18,000 people, most such gatherings being for inter-school sports and competitions. Grey College, the Bardschool, the School of Clerkship, the University of the Flanaess, and low ranking wizards from the University of Magical Arts are joined by independent fraternities, sororities and other student groups representing the minor schools in these games."


"The oval field (shaped that way to accommodate certain "long-field sports" played by two teams) is usually hard-packed sand, but rolls of grassy turf can be laid over it..."


(University of the Flanaess) "..the student body is lively and loyal and it does well against Grey College in team sport."


(School of Clerkship) "The school does not do well in athletics against Grey College (or even small schools)..."


"The faculty, staff, and students of Bardschool have a friendly rivalry with Grey College and compete against that facility in sports and other events."


In 629 CY (Our timeline always ran far ahead of canon), a group of PCs settled down in Greyhawk City and with the great wealth from their adventures, began a "Guild of Adventurers" to combat what they felt was unfair practices of the Mercenary's Guild and several other  city institutions. Their hall was nicknamed the "Brothers in Arms" and was friendly to all civilized races, classes and religions. The actual reason behind them joining the inter-city rugby league is unknown, but I'm sure it was to boost the popularity and membership of their new organization. 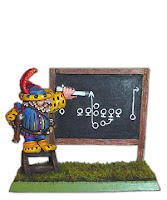 As I designed, the current G.R.L. had been going on nine years before the Brothers in Arms came along, so a quick recap of the previous seasons was needed to show where the various teams stood. The G.R.L. consisted of:

The Adventurers' Guild replaced the School of Clerkship who had tired of getting beat on year after year. Dyvers College was invited in to replace the University of Magical Arts, who dropped out because of a subplot involving the High Ring (more on them another time). This league wasn't just a lark, there were other subplots between the schools (and the corrupt City Watch team) and recruiting to be done each year (much akin to hiring henchmen) as well as player tampering I am sure. Then there was the inevitable after-game parties and brawls at Gnarley House. The only thing my memory is sketchy on is how these games were actually played out (for the PC's team at any rate), but I do remember having some sort of system because some of their own players were involved and they had created set-plays. Once again, in hindsight I wish we had played Bloodbowl for the G.R.L. it would've worked perfectly! Sure we knew about Bloodbowl but for some reason were against playing it back then. Naturally, a decade later I got into playing Bloodbowl quite heavily, both table top and online, even going as far to play in a tournament at Gencon one year (the Ratanapolis Revolt). Maybe next time. In any event, I hope this post inspires other Greyhawk fans who like sports to take a break from the dungeon-crawl and do something similar.
Posted by Mike Bridges at 12:57 AM

Awesome on two counts! I always wanted my campaign to feature a Bloodbowl like league. I have hinted at it over the years, but my players never really 'bit'.

Also, you are one of the first people I have heard of other than my self that ran a Greyhawk campaign past the 'canon'-time. I would love to see/hear how you developed the world after the published dates.

katerek: Well you'll certainly see more of that as I dredge it up from my archives and put it on here. In general all I did though was retrofit canon events to fit my timeline as they happened. Somewhere during the Players Option end of 2e I had played out GH so we rebooted just in time for 3e.

Rugby? No football!? What would you call the Flanaess' Superbowl anyway?

Any idiot can run a campaign where you kill Orcus (sic), but it takes some truly sweeeet roleplaying to tell the tale of sports leagues in a fantasy setting!

We all bring our real life to the table during play, but mixing these two loves of yours is truly something to be commended and aspired to by al the rest of us.