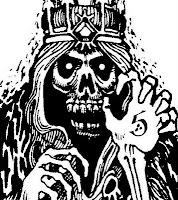 This week begins a new column entitled the "Ring of Five Questions" in which I hunt down notable authors and fans of the World of Greyhawk, to ask them five setting specific questions of a ponderously nostalgic nature. Starting us off is one of the best authors to come out of the old Living Greyhawk Campaign, Creighton Broadhurst. Creighton is primarily known for his work with Living Greyhawk Onnwal as well as his articles and adventures about the schemes of Rary in the Brightlands. Nowadays Creighton is part of Raging Swan Press where he creates Pathfinder RPG compatible game products. Enjoy!

Q1. As a long time Greyhawk fan, you should know the Darlene map by heart. What is your realm of choice in the World of Greyhawk?
Creighton: I have a lot of good memories of Onnwal because of my time in Living Greyhawk - I made some very good friends in LG and had some great games! I'm also becoming very partial to the Great Kingdom - and its successor states; most of my recent campaigns have been set there.

Q2. If you could be one Greyhawk deity which one would it be?

Creighton: Boccob. I almost always play wizards, sorcerers and the like so it would be cool to play at being the best wizard ever!

Q3. You published alot about Rary for Living Greyhawk. What NPC/organization would have been your second choice for a major storyline?

Creighton:  Rary was actually my second choice! Originally, when we were casting about for a major core plotline I got very interested in exploring the ruins of Medegia. It's an area ripe for development and we could have explored some very apocalyptic themes. I think adventures in the ruins of Pontylver would have been particularly cool. I even had an article basically ready to go for the Living Greyhawk Journal (which later saw the light of day in the Oerth Journal). Eventually, however we decided that the plot would have been too regional in focus - in that Medegia isn't exactly central in the Flanaess and its plots would have focused a lot around the Splintered Sun meta-region.

Q4. Is there any Greyhawk module that you wish you had never ran?

Creighton: No, but there are lots I wish I could run. I really, really want to run GDQ1-7. I've played it twice, but never DMed it. Sadly, my current group has a player who has just run it as a DM and thus knows it rather well. I'll have to bide my time. I'd also like to make my players forget the Temple of Elemental Evil and run that again - it's one of my all-time favourite modules, but sadly we all know it rather well.

Q5: There's a vacancy in the Circle of Eight. Which NPC wizard would you pick to fill the spot?

Creighton: I guess that depends on what year it is! Assuming it's after Return of the Eight, I'd add Graf Reydrich (from South Province [Ivid the Undying). His write-up includes a very interesting snippet about him pleading to join the circle 15 years ago (so around 569/570), but that he was rebuffed by Mordenkainen. That really intrigues me; after all Tenser was on the Circle for some time and he wasn't exactly neutral. It would be interesting to see how Reydrich's influence would be felt in the policies of the group.

Nice interview! I'm sure Gary would be interested in Creighton's interest of the Great Kingdom lands. I wonder how long that conversation would last?

Looking forward to the next interview!

Well I bet they have discussed it before in Thursday Greytalk in the past. Creighton did a couple OJ articles btw that were about the GK's cities.

I've recently put out an ebook of my writing, called 'The New Death and others'. It's mostly short stories, with some obvious gamer-interest material. For example I have a story inspired by OD&D elves, as well as poems which retell Robert E Howard's King Kull story 'The Mirrors of Tuzun Thune' and HP Lovecraft's 'Under the Pyramids'.

I was wondering if you'd be interested in doing a review on your blog.

If so, please let me know your email, and what file format is easiest for you, and I'll send you a free copy. You can email me (news@apolitical.info) or reply to this thread.

I'll also link to your review from my blog.

emails can be directed to mortellan@gmail.com