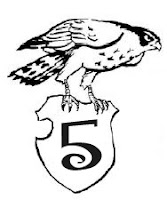 Huzzah! Oh yes Greyhawk fans, the time has finally come to bring out some new installments of my favorite column, the Ring of Five Questions! Last time I had finished off the trifecta of Living Greyhawk Onnwal authors with an interview of Stuart Kerrigan. That leads us right to our next vict- er, guest. This person is a familiar name in the former Living Greyhawk Campaign scene as both administrator and author. Among his works for the campaign was the creative one-sheet news tie-in, the Greyhawk Grumbler (co-written by Sam Weiss) and the core adventure finale Foundations. Today, he still finds time to freelance as a designer for game publishers including Wizards of the Coast, but in addition he is also the author of an amazing "colonial fantasy" webcomic called Snow by Night. Please welcome into the Ring, Eric Menge!

Q1. You should be familiar with the Darlene map. What would you say is your favorite area of the World of Greyhawk?

Eric: The Darlene map is incredible. It has that personal hand-drawn touch that makes it very special. I particularly like the calligraphy. Take a look at words "Solnor Ocean." Look at the scripting on the words. It's absolutely beautiful.

Out of all the areas, I have to say that I like the Domain of Greyhawk. This region has everything you needed for a diverse campaign. There are the plains along the Selintan River, the Cairn Hills, the Gnarley Woods, the Bright Desert, and the Mistmarsh. The only thing you didn't have was mountains, but the Lortmil Mountains weren't too far away. This region of the map was obviously designed by Gygax using his own recommendations from the 1e and 2e DMG. Every environmental type has a place and is available for use by players and DMs.

Q2. Greyhawk has tons of deities, but if you could become one of them which one would you choose?

Eric: There are a lot of good ones to choose from. I'm tempted by Zagyg, because then I could be completely whimsical bonkers and people would expect it. But I think I'll go with Obad-Hai. The Shalm is a wild and untamed god who is steeped in mysticism. He's an ancient god who has ancient concerns. Also, there is the perk of the love-hate relationship with Ehlonna. Oh, you know they have torrid affairs. He is the god of the hunt, after all.

Q3. You were heavily involved in bringing the Living Greyhawk Campaign to a close. Looking back, what was your favorite experience from those years?

Eric: Bringing LG to a close was a bitter-sweet affair. I loved that campaign. Creighton Broadhurst, Sam Weiss, and I were hitting on all cylinders toward the end. The core adventures were coming together to form a coherent story. We also started tying all those adventures together with the Greyhawk Grumbler, which I had a blast writing. I never wanted those times to end. My favorite experience would have to be working with some many incredibly talented Greyhawk writers -- Creighton, Sam, Shawn Merwin, Paul Looby, Pieter Sleijpen... the list of people involved was phenomenal. They made Living Greyhawk into something unique and special.

Q4. Today you continue to work with Wizards, for example on Forgotten Realms' Menzoberranzan sourcebook. With D&D Next in the near future do you see yourself or anyone else inside Wizards interested in reviving Greyhawk someday?

Eric: Yes, and yes.  As long as D&D exists, Greyhawk is never going away. For many of us, it is the original campaign world of D&D. Greyhawk is a perfect fit for the game because they were both designed at the same time, by the same person, with the same voice, tone, and feel. Greyhawk constantly seeps into the core rules of the game, whether it be through the names of the spells, the gods, or the magic items. Appendix N fiction influenced the World of Greyhawk as much as it did the rules of the game. Since D&D Next is seeking to gain inspiration from all the editions of D&D, the designers are looking back at the original rules, adventures, and setting. It would be entirely appropriate to take a fresh look at Greyhawk as part of this re-imagining of the game. Greyhawk is too rich a resource not to harvest.

Q5. You're a fiction writer as well. Imagine you've been hired to write an official Greyhawk novel. What story would you pitch?

Eric: Valent is a Knight's Protector of the Great Kingdom, and a pledged defender of the common weal of Aerdy. Betrayed by fallen members, outlawed by corrupt kings, the Knights Protector survived centuries of adversity and continued their noble deeds. Now, the very kingdom they served has crumbled into ruin. Without a throne to serve, Valent is adrift and the future of his order is uncertain. Will he find a new purpose or will the knights fade into history? 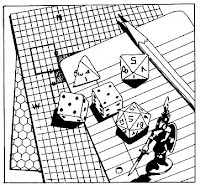 Very nice comments, Mr. Menge. Most of them stirred fond many fond memories of Greyhawk for me. Thanks for contributing.

Thanks for taking the time to "talk" to us, Mr. Menge, it was indeed a pleasure.

Hope you get to write that novel, someday soon.

Mort, Yet another successful Ring of Five interview. Oh Eric Menge you can start writing the novel now as I already want to read it.

You're welcome guys. And thank you for all the kind words.

The Knights Protector story was originally going to be a series of adventures for Living Greyhawk. The remnants of the Knights Protector feel that neither Grenell of Northern Aerdy nor Xavener of Ahlissa are worthy to be Overking. So they go in search of a new candidate for the throne. The players would determine which of the many candidates the Knights Protector actually supported. I was inspired by C4 "To Find a King" by Bob Blake, which was the AD&D tournament module at GenCon XVI.

Sadly, they wrapped up LG before I could put this series of adventures in place. So I've been channeling my creative energies into Snow by Night.

Very cool info Eric. Thanks and keep up the good work!