New: Against the Slavelords Hardcover 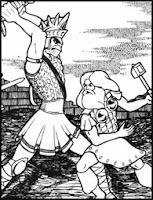 Wizards of the Coast's recent decision to reprint the collected A-series modules into a hardcover book next June is not news to anyone, but an eagle-eyed colleague of mine directed me to this blurb for the upcoming product on their website. The pertinent news here is that Wizards apparently isn't just going with the original four modules, but has now come up with a new "prequel" to the series:

"Added to the collection is an all-new fifth adventure -- A0: Danger at Darkshelf Quarry -- that you can use to kick off an AD&D campaign that pits a group of adventurers against the evil Slave Lords! Module A0, designed for levels 1-3, sets the stage for events that unfold throughout the remainder of the "A" series."

Darkshelf Quarry, eh? Great. I was on the fence about buying this book but now I'm too curious to pass it up. Anyhow, no word yet on who the head writer is on this intro-module. I'm personally hoping for Chris Perkins who has shown to have a good knowledge of the setting, having done reworks of the Giants series including a whole new episode for that epic as well.

Stay tuned for more information on this in the near future (Thanks again).
Update 05/08/2021: You can get A0 in this book on DMsGuild.

This may be the first WotC item I end up buying in years.

Please turn off the Robot question.

Greyhawk making a come back from Wotc? Is this going to be in 5th edition?

The Slave Lords are back?

by the gods, these people just won't die!

I do hope that this new publication is "just the beginning" of new Greyhawk Modules. Since you'll be getting the publication before I do, keep us posted on the new "A0" module.

Ironwolf: Not sure it could be 5th since that edition is still a couple years out from completion. To fit with the rest it'd have to be a 1e retro mod. Hm.

Mystic: Good point, this can only lead to more prequels/sequels if it sells well enough.

And they're also doing the S-series too:

Geffyl: This is true. And it comes out sooner than Slavelords. I'm surprised they didn't have a new deathtrap dungeoncrawl to speak of. Thanks for the reminder, I'll have to highlight this one sometime next year barring any new developments.

I do get a grin or two imagining the look of horror on a 4th or 5th edition player's face when you explain to them...

Yeah, you wake up imprisoned in the dungeon, stripped of all your gear, weapons, armor, spellbooks, etc.

Darva: Yeah it's a helluva lot easier starting up an AD&D game that way. Even more mean if those items are nowhere to be found later.

UA reprint. Despite popular opinion I kinda like UA. I always find gems in it that I never remember, much like the 1e DMG.

I really like Unearthed Arcana. I play Basic D&D, heavily houseruled, so I don't dwell on the races and classes much, but the new spells and items are fun, and the section on non-human deities and mythology is great for those who lack access to 2e Monster Mythology.

Anything Items were a bit silly but there are alot of good GH named items in there that don't get much exposure.

I'm surprised, if they were simply looking to fill a page count, why then-new material from Scourge of the Slave Lords is not being included. Chris Perkins would do a good job, but so would Bruce Cordell. I don't trust most of Wizards' remaining staff to handle Greyhawk. The best case scenario would be if they hired Harold Johnson to freelance this!

It is great and sad to see this. Great seeing the re-releases, sad that most likely WotC is putting it out is just to keep the coffers afloat till 5th Ed come out, as 4th is dead in the water. 4th ed had lost of resources, great art, and production put into it... and this is sad... imagine what kind of game 3.5 could have been if they kept it alive and they put such effort. I am glad to see these Edition re-releases, it'll help WotC out with figuring out what 5th should be and it brings back those games. AD&D/D&D were played and enjoyed for each and every edition out there... the game was played and good times were had... maybe we don't really need a "5th" Ed, but just figure out what Edition made works for the majority and go with that...