Sea Princes: The Mines of Hokar 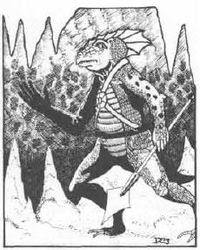 As promised here is some pertinent details from one of my Sea Princes campaign spin-off, the dungeon-grind Mines of Hokar.

The sole entrance to the mines is tightly controlled by guards and an accountant for the Marquis of Hokar who closely records what "dungeoneers" go down with and what they come back with. Explorers are given these conditions before accessing the mines:

1. Half of all valuables found in the mines goes back to the Marquis (coins, gems, jewelry).
2. Metal items (armor, weapons, etc.) will be bought back by the ruler at half cost. Usually such items belonged to adventurers who never made it back alive.
3. The ruler gives dungeoneers a 10 g.p. bounty for each fresh left claw from a surviving "scaly-race". Troglodytes are a persistent sentient threat below.
4. For each gold Toli Captain coin recovered, the Marquis will pay a reward of 500 g.p.

Needless to say some days venturing down in the mines is profitable, other times the PCs are lucky to come back with their own gear intact.

A unique feature of the Mines of Hokar is the nicknamed rooms. After several years of meat grinding in the dungeon, numerous people have explored the same rooms over and over. In time these chambers have all earned nicknames which are left on signs or scrawled on walls to welcome newcomers to the mines. Such locations usually live up to their name too. A few of my favorites so far are:

The Lobby: The first room all dungeoneers come to, a sort of safe rest area. Two turnkeys watch a set of several numbered doors and let PCs into the dungeon proper. When the dungeoneers want back in the lobby to leave, they must knock the number of times on the door first. The only rule, don't be followed back.

Kill Alley: Written on a shield in dry blood is the words Kill Alley. This part of the former mine lives up to its reputation with many ambushes starting the moment the Lobby door is locked behind the PCs.

Mud Junction: a large cavern with a perpetually muddy floor. The mud should not be and is rumored to be magically created. Dungeoneers find moving through this location difficult, more so when trogs are trying to throw javelins at them.

Clatterhall: This huge cavern was once the center of much of the mines work. Now it is littered with years worth of debris; crumbled rock, wood, glass, bones, chains, pottery, etc. Walking through here without making a noise or hurting oneself is a task.

What the players are on the lookout for are rooms without a nickname, which is a sure sign they've ventured farther than anyone beforehand...

That's all for now. Next time, more on Hokar in my campaign and a bit on the Marquis and his prized coins.

Sounds like you're having a good time with it. Look forward to reading more.

Hey, can yiu make a map of the mines available?

That's a good idea. Maybe some day in the future!