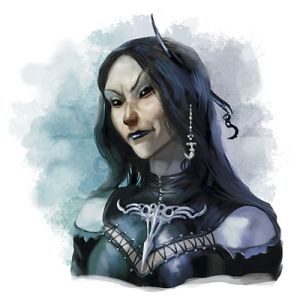 Well my last post on Greyhawk places both bad and good was a fun exercise so I'm jumping back on that topic and doing people of Greyhawk next. So many to choose from! Here we go...

Acererak: The demilich of the Tomb of Horrors who is also it's ultimate trap. Gotta love that. Acererak is such a popular figure he got a sequel module and he appeared in the flesh in the graphic novel Vecna, Hand of the Revenant.

Cobb Darg: The enigmatic ruler of Irongate is surprisingly an NPC I doubt I've ever used except as a passing reference. Perhaps I'll get to him one of these days in my Sea Princes campaigns.

Dragotha: Speaking of liches, if anyone ever wants to run the grand-daddy of all dracoliches I highly recommend Into the Wormcrawl Fissure from Dungeon #134 If I'm right, this was the next to last installment of the Paizo AP, Age of Worms. There is loot to be had, if your character can live to spend it later...

Fioranna Aielestriel: The demure elven ambassador to Greyhawk City from Nyrond. I doubt there's a more comely name in all of Greyhawkdom.

Glodreddi Bakkanin: Speaking of Greyhawk City. They say there is no NPC more hated in the city than Glodreddi, the head of the Greyhawk Revenue Service. I put that to the test many times and I can confirm it's true.

Heward: The Quasi-deities like Heward (of Mystical Organ fame) have always intrigued me. They're no different than the uber-NPCs of the Forgotten Realms that we always rail about, yet I think we don't do the same with quasi-deities because they generally leave the Flanaess once they get too powerful. They're just measuring sticks for PCs to look up to, not compete with directly.

Jumper: Probably the most powerful illusionist (IL18) in Greyhawk canon. According to Iuz the Evil he runs an insane asylum in the Old One's empire. I'm pretty sure Jumper put half of them there himself.

Korenth Zan: In terms of physical power, resources and manpower, the leader of monastic order of the Scarlet Brotherhood has got to be among the baddest-ass NPCs in not just Greyhawk, but all D&D. As usual, I don't think I've ever directly used him against players. I think he should be part Pai-Mei from Kill Bill and part Ra's al Ghul from Batman.

Lzandred: On the other end of my lich appreciation scale from Vecna, Acererak and Dragotha is Lyzandred from the Crypt of Lzandred the Mad. Part of the Lost Tombs series, this module both made me mad and should have stayed lost. I can appreciate a good puzzle, but an entire dungeon of them and they could be bypassed by combat anyways? Also, Lyzandred taught Zagyg. Nice, all we needed was more canon ties to Zagyg and another lich to boot.

Mordenkainen: So much of Greyhawk is about it's wizards. It's unavoidable in this setting as it is in Forgotten Realms. Magic after all is what we all want in our fantasy settings. As hard as we try to do low-fantasy, eventually you got to have an uber-wizard like Mordenkainen there to show you something fantastic so you can have a memorable adventure.

Nerof Gasgol: I have ran the City of Greyhawk as an urban setting more times than any other. One character has always ruled at some point in those city campaigns, and that's Mayor Gasgol because of one thing: the Thieves Guild. Glodreddi might be the feared tax collector, but the thieves who rule this city behind Nerof is what makes Greyhawk the place for intrigue and political drama.

Obmi: Speaking of dwarves, this evil servant of Iuz from Gygax's novels is a decent character but his name drives me nuts! It might just be me, but if I try to say Obmi out loud I always end up with a speech impediment for some reason.

Philidor: Speaking of uber-NPCs and reviled characters, who remembers this guy? If you don't, well, his powers must be working. I unfortunately remember him too well.

Quij: The orc sidekick of Robilar. To this day, even though I know little about him, I think Quij is a cool concept well ahead of his time (that is before half-orcs or their ilk were playable races).

Robilar: Speaking of which. I've used Robilar in just about every conceivable way you can now. Evil Robilar in the Bright Desert, Lord Robilar in the Greyhawk domain, or how about bandit battling Robilar from Scott Casper's Castle Greyhawk stories? Read them now!

Spidasa: I don't contemplate famous clerics of Greyhawk enough. Spidasa, the See of Medegia was once a slick villain that is until Ivid put him in the dungeons under the Endless Death. This is a nasty punishment where the prisoner wears a ring of regeneration and is tortured FOREVER. Long Live Spidasa!

Turrosh Mak/Theg Narlot: I'm not sure which name I prefer, but both are lousy rulers for the Pomarj in my opinion. Reboot Greyhawk and give the Pomarj a half-ogre fighter. He'll lead those humanoids to war!

Uhas of Neheli: I like how published Greyhawk has a meta-publishing history where the Guide to Greyhawk itself is written by an NPC (Pluffet Smedger) and there those lesser works detailing it's history like Uhas'  Chronicle of Secret Times.

Volintakulus: I could easily talk about Vecna, but I've done liches and wizards to death. Now Volintakulus, better known as "Volt" in Rary the Traitor, is a great blue dragon to use. This is not in the sourcebook, but one of my favorite dragon stories is how I had Volt line his corridors with fused/melted copper pieces (who needs them anyways?) to create a massive electrical trap with his breath weapon. Oh yeah, treasure that kills!

Warduke: Anyone who was into D&D or the cartoon in the 80's knows Warduke. I once had a Warduke figure that is now lost to time. Warduke was retroactively brought into Greyhawk canon in Dungeon #105 as a Hierarch of the Horned Society. I'm pretty sure he could beat up any of Iuz's henchmen of he wanted to. Warduke should be leading the war against Good!

Xargun: Ah another powerful cleric for yall! (C16) For those who haven't ventured west of Ket (heathens), Xargun is the mighty Caliph of Ekbir. Pay him your respect someday.

Ychbilch: Another name (sounds like a crone alter-ego) for Iggwilv. Yeah she is one of those quasi-uber-spellcasters, but lovely Ychbilch has something those others don't have, style.

Zuggtmoy: Speaking of nasty, evil female villains. Ol Zuggtmoy shall forever be remembered in D&D legend for starting the Temple of Elemental Evil. If your players have ever got to her lair and fought her, well they should know by then that she can keep it. ;)