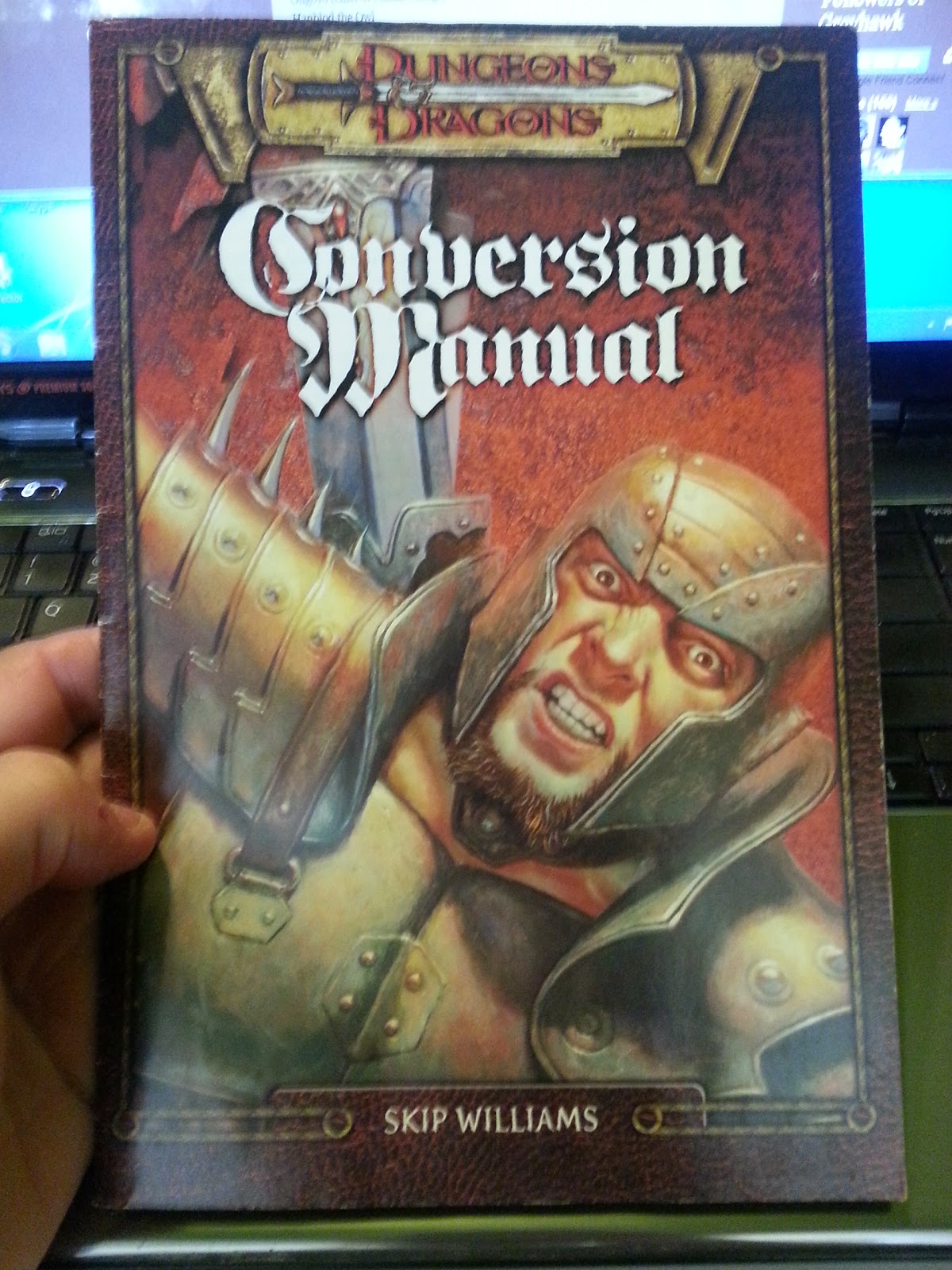 This is an off-theme topic for today. Going through my piles of old D&D material I came across an interesting paperback document I bet not many people still possess, the D&D Conversion Manual by Skip Williams. More specifically this was the manual to help switch your 2E characters over to the then new 3E rules. I remember this booklet being a big deal. My group had played 2E for quite a long time and the rules to 3E were slowly being leaked in Dragon Magazine to drum up interest. I believe it worked, because the campaign we were in the middle of when the books hit the shelves was switched over to 3E thanks entirely to this document.

In 22 pages Skip made us forget about 2E, showing how exceptional strengths like 18/91% was now a more impressive sounding 22 strength. The manual broke us of THAC0 and we learned Armor Class now went up instead of down. There was also three new streamlined saving throws down from that old clunky five. All the nonweapon proficiencies we grew up with were repurposed into skills with ranks like Etiquette became Diplomacy, Mountaineering became Climb and Healing became well, Heal. Class names changed, spell names changed, magic item names changed. Then there was feats. Actually, those needed no converting from last edition cause it was completely new and shiny, but they were teased at to get your interest. 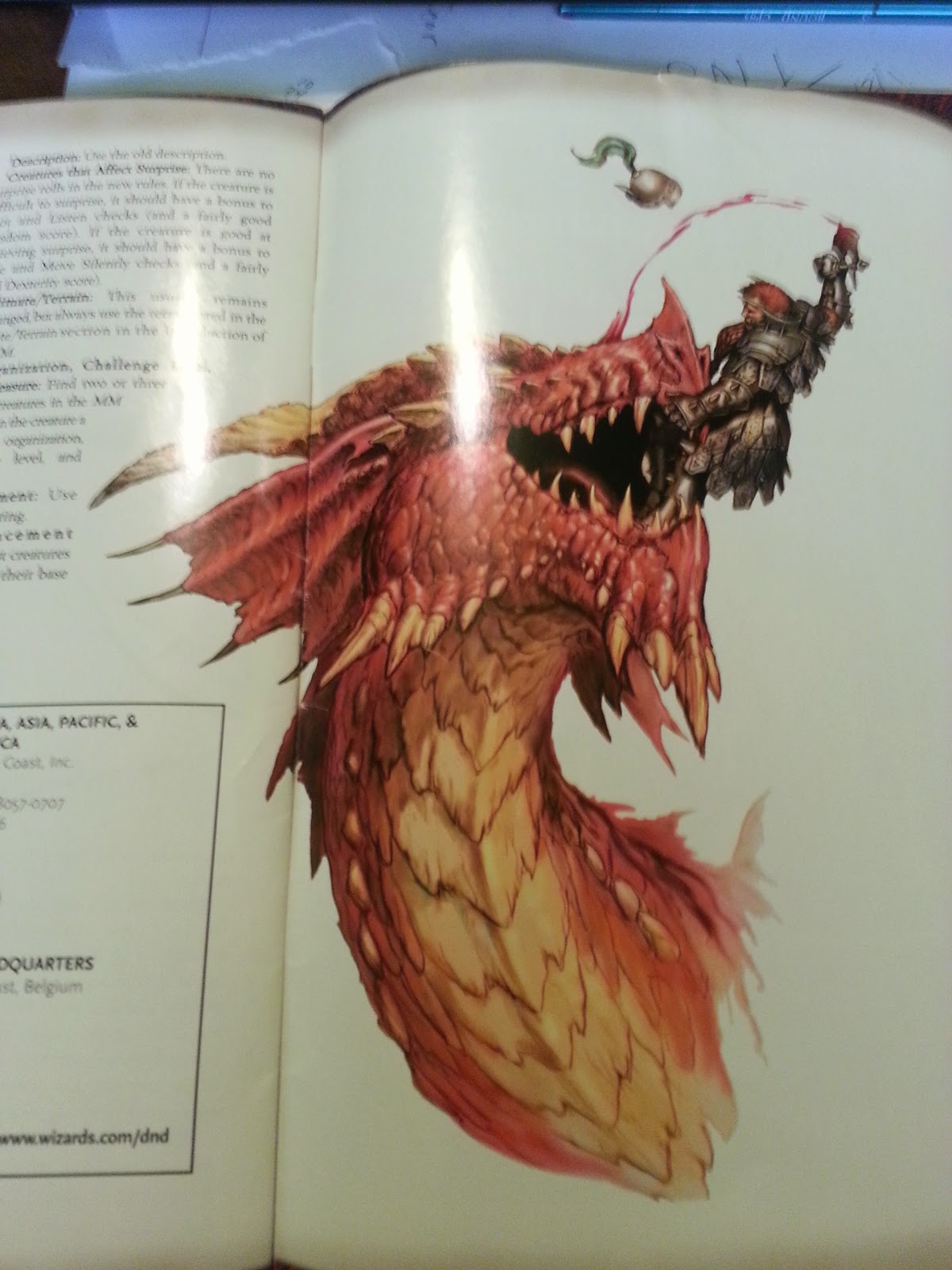 It wasn't long though before it before we realized it was too much work retrofitting our favorite PCs to the new edition and just rolled with a new Greyhawk campaign. The rest is history. By the way I am not panning 2E, it was extremely fun and lasted a long time and I would play it again if someone else ran it. What I am panning is 4th Edition. I can't remember, but did Wizards do a similar conversion document or marketing campaign for 4E? I doubt it, and if they did it certainly didn't work. With 5E however, I feel it has the same word of mouth appeal that 3E had, though as far as I know there is no conversion documents to support it either (though I'm sure smart minds are working on it). And though the ability to spread hype through magazines is gone, the 5E playtest packets, the convention rules previews, online sneak peeks and the release of the free PDF Basic Rules went a long way toward establishing that buzz in the game. That has to be a reason why I'm excited about 5E going forward.

That said, whatever edition you enjoy, go with it I say. I'm about to run a special Halloween session of the AD&D Ravenloft module using 3.5E. The module as written is perfect, but it's easier for me to convert to 3.5 rules on the fly now. I got Skip to thank for that.
Posted by Mike Bridges at 1:11 PM

A conversion document for 4e would have been impossible, as it was not actually the fourth edition of anything, but rather the first edition of a brand new game wholly unrelated to D&D.

Here you can get an officially sourced (not pirated) PDF copy of that conversion guide for free!

And a nice article on the subject.

Too bad you have to log in to do so.