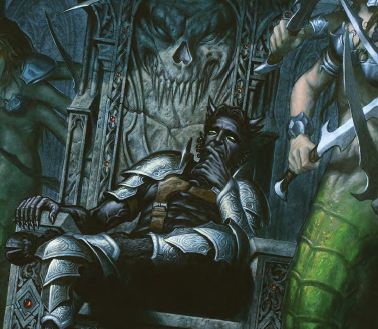 So I've been skimming the new Monster Manual this month and I have to say overall it's my favorite since the first MM in 3rd Edition. This book has just the right balance of fluff and crunch. The stat blocks seem to owe more to 4th Edition than prior iterations, but I have no complaints with the mechanics nor is this a review of that subject. The fluff is what I enjoy reading; and depraved as this may sound, as a Greyhawk fan I'm inevitably drawn to the section on Demons.

The manual entry provides several well-written sections on everything about demonkind from how they elevate in power to abyssal invasions and demonic amulets. Demon summoning and binding is covered, including the obligatory mention of my two favorite tomes, the Book of Vile Darkness and Demonomicon of Iggwilv.

Most of the time when monsters are converted to a new edition, their lore gets subtly expanded upon. The section on Demon Lords does a good job at concisely describing the major players of the Abyss such as Demogorgon, Orcus and Lolth. Then there's this bit bout Graz'zt which caught my eye:

"Rewards for Outsiders. Although most demon lords rise up from the vast and uncountable mobs of demons rampaging across the Abyss, the plane also rewards outsiders that conquer any of its infinite layers. The elven goddess Lolth became a demon lord after Corellon Larethian cast her into the Abyss for betraying elvenkind. Sages claim that the Dark Prince Graz'zt originated on some other plane before stealing his abyssal title from another long-forgotten demon lord."

Yes, evidently during last edition those wily sages expounded that Graz'zt might have been an arch-devil of Hell before leaving to take on the Abyss. That explains his more human-like appearance and demeanor. Graz'zt is one of those characters that has an abundance of backstory accumulated over the editions and novels. Graz'zt has a full family tree of demons and demigods and to think he started on a different plane is a development I like. I can only imagine the other lords hate Graz'zt and Lolth even more because of their migration.

The manual continues with sections on regular demons, bringing back the classic "type 1-6 " designations based upon strength. I also like this edition's demon entry because they've included Yochlol the rarely seen vile Handmaidens of Lolth. In addition I am pleased to see the Goristro featured again. This titanic demon got his AD&D start in Dragon Magazine then later only popped up in supplemental books, yet recently the Goristro is now a core book critter.

That's all for now. Happy gaming!
Posted by Mike Bridges at 2:08 PM

Thanks for sharing these tidbits, Mike: I'd not have any idea of Greyhawk in 4th or 5th edition without your well-appreciated efforts :D

When Dragon #361 established that Graz'zt was the son of the Obyrith queen Pale Night, it mentioned certain little known legends suggesting that his father may have been "one of the old gods, a being of crawling chaos with a thousand faces".
Iuz being the grandson of Nyarlathotep would give an interesting spin to Greyhawk.