Five Shall Be One: Harmonizer 5E 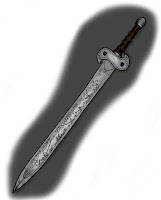 Hey folks! Yeah I haven't kept up on my 5E write-ups of the Five Shall Be One/Howl From the North conversion to Greyhawk's south seas, but I do promise to keep showing converted material from my home game. Today I unveil the fourth of the five Blades of Corusk, called Harmonizer.

Harmonizer was a particularly difficult blade to convert. 2E did a lot of things without regard to rules or game balance, so compared to thew previous three swords, Stalker, Dreamsinger and Greenswathe, this one is sorta over powered if not semi-cursed. I have ditched original author Carl Sargent's ability of testing a wielder by creating duplicates and did my best to keep the spirit of the rest of its powers. The one that has given me the most trouble in playtesting is the Code of Conduct of course. At first I had it giving advantage and disadvantage in a lopsided fight, then figured one way or the other was bad enough for the owner. You don't want the PCs throwing this blade out for being too troublesome.

The other balance factor that I couldn't decide on was its "dagger weight" another gross game balance killer, but I went with giving it the Light property yet not the Finesse trait which evidently is a turn off to rogue classes now. If I had gone with both properties I suppose it couldn't make Harmonizer any stronger, I'd be happy to hear some input on this design, Check it out:

This greatsword is a masterful work of art. When light catches Harmonizer’s surface just right, an elaborate etching can be clearly seen depicting a ritual being performed by five figures holding five swords; a swirling mass of wind and earth coils eerily behind them.
Once wielded by the great Fruztii chieftain Helden Stormfist, Harmonizer looks imposing and heavy, but it inexplicably weighs the same as a common dagger.
You gain a +3 bonus to attack and damage rolls made with this magic weapon. It has the following additional properties.
The weapon functions as a defender sword.

Unique Construction. Due to its magically reduced weight, this great weapon replaces its Heavy and Two-Handed properties with Light and Versatile (2d8). However, the blade is still too long and bulky to be considered a Finesse weapon.
Perfect Balance.  Furthermore, due to the balance of this weapon you gain proficiency in this weapon if you don’t already have it and you gain a +5 on initiative checks.
Enhanced Traits. While attuned to the blade, all six of your ability scores increase by 1, to a maximum of 20.
Code of Conduct. This strange side effect happens when the weapon is wielded in a severely mismatched or outnumbered situation. The magical harmonics of this blade interfere in combat granting the weaker side advantage on attacks or imposing disadvantage on the favored side (DM’s discretion). This enchantment works in a 30-foot sphere from Harmonizer even if it is put aside.
Sentience. Harmonizer is a sentient neutral weapon with an Intelligence of 14, a Wisdom of 10, and a Charisma of 16. It has hearing and darkvision out to a range of 120 feet.
The weapon communicates by transmitting emotions, sending a tingling sensation through the wielder’s hand when it wants to communicate something it has sensed.


Personality. The sword’s purpose is to enforce a code of honor and balance among the company of the Blades of Corusk. Though the other blades have their own temperaments, the diplomatic Harmonizer manages to keep them all together somehow, but it certainly expects the most of its bearer. Any conflict with Harmonizer can turn ugly with the normally light sword refusing to be lifted or in the worst case, vanishing entirely, thus starting the search all over again.