Welcome back folks. News is few and far between at Greyhawkery it seems. The info on my home Greyhawk campaign has been trickling as well. Well today (in honor of Talk Like a Pirate Day yesterday) I have some character sketches from my ongoing Five Shall Be One/Howl From the South 5E Campaign. Check them out! 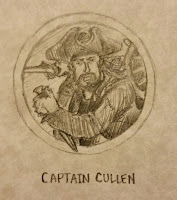 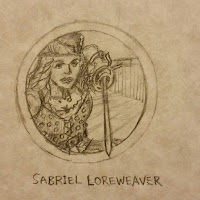 Captain Cullen is a pirate rogue and former first mate to crab fisherman Captain Cragg. He took over the old caravel Sea Hag and soon upgraded to a faster vessel, the pinnace Envy after the crew was tasked with a quest to find the five Blades of Corusk. Even though the crew agreed no leader, he is still the one who ultimately calls the shots. Cullen may be a two knife killer with a short fuse, but he does have a good heart. If you can find out where he hid it!


Sabriel Loreweaver is a bard of a less traditional variety. She rarely plays the entertainer, instead as first-mate, she inspires her crew  to sail faster, fight harder and at times give her what she wants. Sabriel has an even shorter fuse than Cullen now that she bears the magic rapier Dreamsinger and her wild side has led to many dalliances during her voyages. 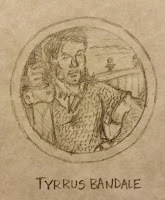 Tyrrus Bandale is a second generation fighter and sailor who has risen above the humble life of a crab-fisherman. Although he isn't the keenest mind on the Envy, his strength (and some say his stamina) is as prodigious as an ogre and his skill with a two-handed sword, namely the famous Blade of Corusk Harmonizer is so-far without equal. 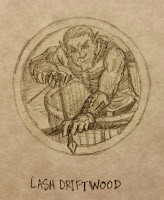 Lash Driftwood is a sea elf ranger from the deep-cities of the Azure Sea. How he first became entangled with Captain Cragg's crab-ship is unknown, but now he is cursed to seek out the Blades of Corusk like his fellow crew members. Lash's deft eye-hand coordination has made him the perfect look out and archer for the Envy. He also bears the long sword Stalker which has made him even more elusive. 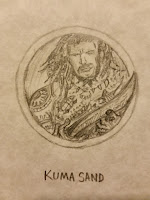 Kuma Sand is the most laid back druid you'll ever see. A worshiper of the entire pantheon of sea gods, Kuma was content catching crabs and mending wounded sailors. The curse to find the Blades of Corusk has led him astray in life and has gained him the scimitar Greenswathe in the process. Kuma is so unobtrusive that he effortlessly blends into the background and then conveniently steps back in when his comrades need him most. 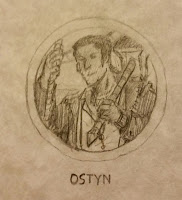 Ostyn the fighter was once the lowest ranking deckhand on the Sea Hag, until fate brought him into the quest for the five blades and lifted him to a greater role on the Envy. This hammering sailor of Olman descent is also the most capable shipbuilder in the crew. Ostyn is a fiercely loyal compatriot to the end, a fact that Sabriel capitalizes on from time to time.
Posted by Mike Bridges at 1:27 AM