Five Shall Be One: The Edge 5E 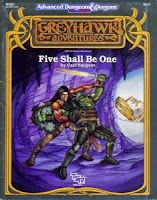 Howdy Greyhawk fans! While I'm finished doing 5E write-ups of the Five Shall Be One/Howl From the North conversion to Greyhawk's south seas, I did promise to keep releasing converted material from my home game. Today I unveil the fifth and final of the five Blades of Corusk, called the Edge. And no I'm not talking about the guitarist U2. Blame Carl Sargent.

The original Edge sword design was for a bastard sword, which is a weapon type not in official 5e D&D rules (yet) so I decided to go a new route and make this weapon viable in the hands of many classes by allowing it to change from dagger to short sword or to longsword. For you old 80's-philes like myself, I imagine the effect as the Sword of Omens from Thundercats. The Edge in Howl From the North was powerful and I think I retained much of that in my 5E conversion. One minor alteration I made was because I couldn't justify the visual look of "three" dagger jutting from the sword since I was making accompanying art for the write-up. Again, for 80's reference I went to Kurgan from Highlander to give the Edge a pair of tines that snap out at 45 degree angles at will. Two flying blades seemed like enough anyway, since by the time the heroes have all 5 weapons, a ranged poison attack is likely to be their least frightening ability.

I hope you enjoy this conversion. Comments are appreciated. Enjoy!

For hundreds of years, sages have argued whether the Edge is a short sword, a long sword or merely a parrying dagger, but the strange truth is they are all right. The Edge is made of gray steel, yet it never gets dull or marred. Despite attempts, the blade cannot be further honed, for it is already so sharp it can split hairs at the slightest touch. In contrast, the Edge’s hilt is wrapped in comfortably soft suede leather. The stark design of this unusual blade is offset by a pair of blackened dagger-like tines jutting at angles from the pommel. The Edge was once wielded by many leaders and kings, among them the Cruskii folk-hero Vorlag König.
You gain a +3 bonus to attack and damage rolls made with this magic weapon. The blade also ignores resistance and immunity to slashing damage. It has the following additional properties.
Unique Design. The Edge is a brutal looking weapon that on command magically expands, or contracts from dagger length to short sword, or at full extension a longsword. While in each of these of forms they have the normal attributes of a weapon of that type.
Flying Daggers. You can use an action to command one or both of these daggers to fly from the pommel at a single target within 60-feet. When you make the ranged attack, you do so with an attack bonus of +5. A creature hit by a dagger takes 1d4 damage and must succeed on a DC 15 Constitution saving throw or take 2d10 poison damage, and become poisoned for 1 minute.  After being fired, a dagger crumbles into dust. This property can’t be used this way again until the next dawn when the lost blades reappear.
Sunder. While the weapon is attuned to any class proficient in short or long swords, you gain the ability to sunder weapons or armor. When you attack a creature and roll a 20 or greater on the attack roll, that target takes an extra 7 slashing damage. In addition, if the target is using a shield or weapon in combat, one nonmagical item in hand is randomly destroyed. If no item is in hand, a target’s worn armor is destroyed instead and no longer provides an Armor Class bonus if nonmagical.
If an item sundered is magical, it can only be used at disadvantage until repaired. Likewise, armor loses its magical bonus until repaired. Further sundering attacks on an item have no further effect. The blade cannot sunder artifacts or legendary items.