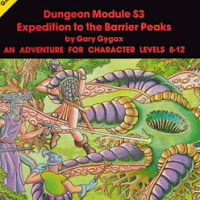 Welcome again Greyhawk fans and 5E gamers. I'm currently playing Storm King's Thunder and I own Curse of Strahd. Both are solid stories so far. But surely the next big book event is already in the works. Rumors have been hush and it's a slow week, so it seems this is a good time to revisit my own oddsmaking on D&D's next 5E storyline. There's no sense in rehashing the same blurbs though so I'll just shoot for a single prediction:

S3: Expedition to the Barrier Peaks
A downed spaceship scenario isn't out of the realm of possibility. Remember, it wasn't that long ago head story honcho Chris Perkins tweeted a teaser picture of a Froghemoth and other aberrant monsters. Now, those most likely were teasers for the recently released Volo's Guide to Monsters, but, there's a new niche in RPGs that D&D should try to exploit, weird fantasy.

Games like The Strange and Numenara have been all the rage in recent years. An adventure in the vein of Barrier Peaks thrust upon a traditional world like Faerun or Oerth could unleash enough odd monsters, magic and mayhem to set itself apart from their previous iconic threats; Dragons, Elementals, Giants, Vampires.
In addition to the classic froghemoth, Volo's Guide also includes quite rare choices such as vegepygmies and the trapper, all three introduced in S3. Pair that coincidence with a host of new playable monster races in Volo's and you have fuel for a weird-fantasy storyline that can take its inspiration from Expedition.

And don't forget the robots and ray guns. Greyhawk, Mystara and yes even Golarion have all went the crashed space-ship route before. Who is to say Volo hasn't stumbled upon something in the Anauroch? We shall see...