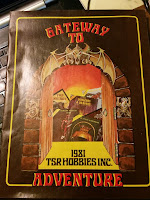 Welcome Greyhawk mavens and fans of D&D. As I showed off last week, I recently purchased an old Expert Boxed set and within this box (no dice unfortunately) was a mint copy of the 1981 TSR Hobbies game catalog. Oh my is there a lot of stuff in here. Strap in for a nostalgia ride! 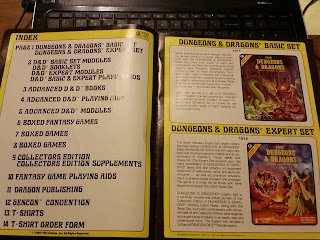 I love the index to this document, such big text and the fantasy font. Very 80's. One the right is the two games that got me started, the Basic and Expert Sets. I now possess both of these great boxes with amazing Erol Otus art on the covers. My favorite part of the product blurb is how they describe dice:
"DRAGON DICE(tm) random number generators."
"DRAGON DICE(tm) Randomizers"

I vaguely recall TSR bringing back Dragon Dice in the 90's but as a game of some sorts. I never knew they tried to trademark the polyhedron set. And I certainly have never told a player to roll a 20-sided randomizer to attack. Too funny. 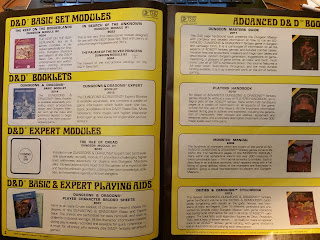 The next spread shows us the basics needed to run our Basic & Expert games plus the advent of the new Advanced D&D line (which I had soon jumped to). I like the blurb for Palace of the Silver Princess. If I knew then what I know now, a copy of the orange cover version of this module would've been worth money today due to its racy interior art.
The D&D Player Character Record Sheets were among my earliest buys. I still have many of those green sheet characters. Advanced D&D of course is what really got me going. My friend Charles got me the DMG for my 10th birthday and my other friends have been paying for it ever since. I also recall spending many a night pouring over the Deites & Demigods Cyclopedia. I was always a fan of mythology in school (weirdo) so to see stats and images associated with pantheons I'd never heard of was fascinating (oh yeah, and I hear it had nudes). 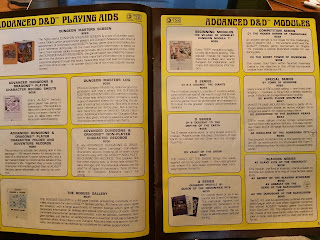 I never had the 1981 Dungeon Masters Screen though I did acquire it a few years ago. The Rogues Gallery is also a must if you want to learn more about the obscure luminary characters of Gygax's Greyhawk history. I never had the DM Log and Record stuff, regular notebooks always seemed to do the trick. I use steno notebooks to this day.
On the right is a whole assortment of early Greyhawk history in AD&D Modules. All of these old adventures (which all got their start in convention play) form the meat of the published World of Greyhawk setting as we know it. Check it out, even back in 1980-81 the Tomb of Horrors was a best seller. 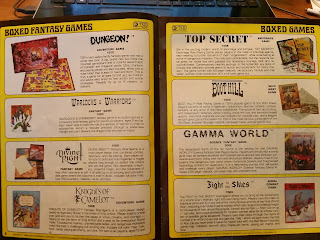 This spread shows some classic games. One I've not heard of is Warlocks & Wizards. Talk about simple you are either a warrior or a warlock no other choice, and your quest is to escort a princess through the wilderness. Easy enough! Top Secret was always a guilty pleasure of mine. I love James Bond movies and though I didn't have this edition specifically I'd love to look through it today. Boot Hill and Gamma World are also games I'm sure my friends would jump at today. These original editions I'm sure are much more fun than their descendants. 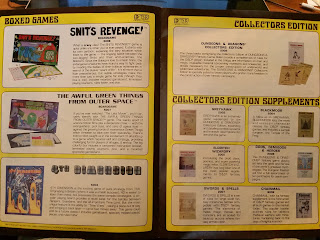 I never had a chance to buy Boxed Games like Snits Revenge and Awful Green Things though I did get to sample some Tom Wham games like Elefant Hunt from the pages of Dragon Magazine. It's also incredible to see that the white booklet set of D&D was already a collectors edition in 1981! These are booklets I try to collect at conventions when I see them. So far I own Blackmoor and Eldritch Wizardry. 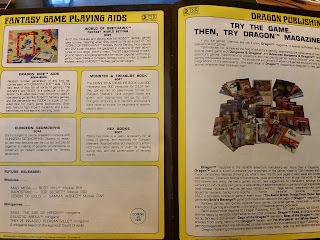 At last, here we see the ad for the World of Greyhawk fantasy world setting. This is the 1980"folio" version which contains the same poster maps we all know and love by Darlene but the booklet on the kingdoms was still rather brief back then and didn't include deities at the time. In another two years, we'll have the full boxed set with maps and two guide books.
I owned the Dungeon Geomorphs. Neat stuff. Didn't really do it for me. The Hex Books on the other hand...I used the hell out of those and to this day I still love drawing maps on them (thanks Black Blade Publishing). Lastly, check out the advert for Dragon Magazine. D&D got me hooked, but this magazine (until it went out of print for good) was really what kept me in the hobby for life. Getting a new magazine in the mail every month was a joy. Seeing the cover was always a surprise in of itself. The content was bonus: comics, games, fiction, letters. When I see how openly popular RPGs are today, it makes 10 year old me feel validated for staying with the hobby. 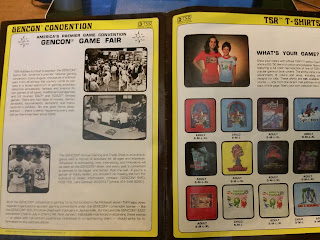 Finally we see the spread for GenCon Game Fair and TSR Shirts. It's crazy to think the convention (now in Indianapolis) had it's 50th anniversary this year. Back in 1981 I would've never dreamed I'd go to one of these much less ten or so! As to the t-shirts, I want them all! No wonder I never saw them before, you can only get them through the catalog (only $6 per shirt!). Hm, I wonder what would happen if I sent a check and T-shirt order to TSR in Wisconsin...

That is so fantastic! I want to go pull mine out and read it again for nostalgia sake.

Brings back memories. I had the DIVINE RIGHT and BASIC D&D shirts.

Timothy: I wish I had bought more of this stuff back in the day. What other catalogs do you have?

Ah, nostalgia! I've managed to play all of those games except for Warlocks & Warriors, Divine Right, Knights of Camelot, and Snit's Revenge (and I understand Swords & Spells almost counts as its own game).