Birthplaces for Tieflings and Dragonborn 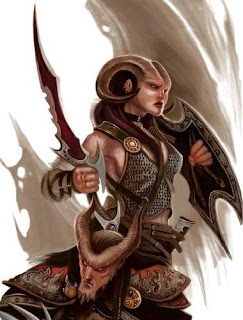 Welcome back friends of Greyhawk! In an effort to balance my last post, which had little to show off, I threw together this nice randomized chart based on the character birthplace charts in the 1983 boxed set Glossography. This one is for you 5E fans who like to use the playable races of dragonborn and tiefling which actually became popular during 4E and survived going forward. Fiend-blooded tieflings in fact go farther back to 2E when they were a playable race in the Planescape setting. Along those lines I'm not sure how closely dragonborn are to Dragonlance's draconian race, so there's that precedent, but their current origins derive from 3E as magically transformed servants of Bahamut (thanks Armitage).

Disclaimer: despite being official D&D, neither is truly a Greyhawk favored character race to use. There is no published regions that currently support these uncommon races. The goal of this chart is to show that tieflings (those of infernal heritage) and dragonborn (enhanced lizardmen essentially) can have a place in the Flanaess. They could be from scattered tribes found in the darkest recesses of the map or found among the urban masses of Oerik's major cities. *Even more plausible is that these races come from "Beyond the Flanaess" where across vast prairies and over widest oceans there is rumors of draconic cultures and decadent civilizations yet undeveloped. Only recently, has these races come into contact with this part of the world and may yet join the ranks of Greyhawk's heroes.

Dragonborn go back farther as well. They originated in 3e, where they were members of other races that had been transformed by a magical ritual when they pledged themselves to the service of Bahamut. 4e just changed their origin.

Really Armitage? Cool. I thought 3E was all about the half-dragons. I remember Paizo had a moratorium on them once in their APs. I will edit that fact, thanks.

While neither race has support in published Greyhawk works, I think there is precedent for tieflings: look no further than Iuz himself. (I know the Old One is actually a cambion, but it's pretty much the same thing.) Lands with traditions of demonic consultation probably also have traditions of demonic "conjugation" as well. :P Tieflings would fit right into those evil realms.

Dragonborn are a harder sell... Maybe the human-loving Greyhawk dragons are somehow responsible?

@Mike Bridges:
They originally appeared in Races of the Dragon.
Their original appearance also resolved the "reptiles with breasts" issue that some people like debating. When someone was transformed into a dragonborn, they still retained some physical traits from their original race. Ex-dwarf dragonborn were short and stocky, ex-elf dragonborn were slender, ex-halfling dragonborn were really short, and female dragonborn still had breasts.

Armitage: Ohhhh yeah it's all coming back to me now haha.

MP: True, I'm not sure how I didn't slip in the cambion/alu-demon reference. Well I did consciously reflect that in the chart. You have a 5% chance of being born in Iuz. And overall a 15% chance of being born somewhere in his extended empire (post-wars). That's probably too light in retrospect. I wonder if I should've narrowed my list down...hm.

I've become in favor of Dragonborn emerging from another world. Like the rhennee, Dragonborn are depicted in the lore as wanderers, either alone or in family bands. It would make sense if Dragonborn clans, or perhaps even families were wandering out of a mystic portal from Nerath (Near-Earth), a hypothetical world along the magical axis, much as the rhennee came from Earth.

The Dragonborn wouldn't have too much of an idea where they were from, only that they shared the surrounding peoples' opinion that they came from "somewhere else" and foreign.

I'd imagine they would congregate in areas where Humanoids are tolerated, but their mostly good devotion would swiftly ally them with more righteous polities. I would totally steal the idea of them fighting in the Dachengrabbs. Maybe they're being promised land if they can take it, while evil Tiamet-worshiping Dragonborn are trying to cut a deal with the Overlord to form a buffer state for their clans.

Good stuff Morgan! I honestly can't decide what to do with Dragonborn and I haven't used them in my own campaigns yet.

The justifications for Tieflings in my 5e GH game does focus on them coming from the Great Kingdom, Horned Society, and the Lands of Iuz as well.

Dragonborn are a bit harder, but I also wanted to included minotaurs as well. Justification that was that over the centuries, Dragonborn and Minotaurs had been gated in by Infernal powers to bolster the armies of the Malachite Throne.

There are Tieflings in Greyhawk. There's a Tieflings in Expedition to the Ruins of Castle Greyhawk, Erik Mona's fine adventure that restores Robliar to goodness among other things. The good thing about Oerth is that there are so many random monstersNd so much unexplored territory that the idea that Dragon born were hidden somewhere is easy to believe. There's a whole Asian type empire called Shaofeng or the Celestial Imperium that no ones even written a paragraph on.

And still there is is Naull, the iconic human wizard of 3e with clearly asian origin.

dragonborn are canonized in that Cauldron adventure by that prolific dragon who even had a dragonborn minotaur.