Return to Greyhawk on Twitch

Welcome again fans of Greyhawk! This week I am promoting a new venue of Greyhawk entertainment on Twitch called Return to Greyhawk. This is a live D&D 5E campaign and I'm jazzed about this particular channel given the rise in popularity of streaming D&D tabletop groups, mainly because Return is the first I'm aware of actively presenting themselves as a Greyhawk game.
I watched most of their first session last night and it was everything you'd expect in a tense, hard fought D&D adventure (no spoilers), but I went back and re-watched their opening video to episode one and it's AMAZING! Please watch this if nothing else, it's a lovingly crafted intro to a new campaign; you won't be disappointed in the overview it gives to the World of Greyhawk setting.

Here is the cast of characters: 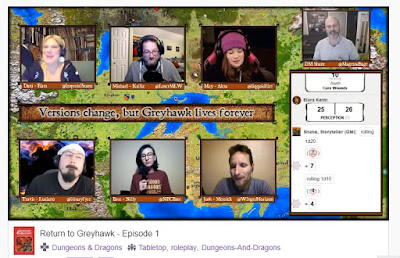 After the first session, the cast gave away a prize to one lucky viewer, a copy of the classic module Mordenkainen's Fantastic Adventure. Sadly I didn't win this prize (already own it) but I will be back for more. For those wishing to join me, expect the party to be back in action, live on Sundays 7pm to 11pm (est). Carry on, Greyhawk!
Update 06/24/2021: Sadly this channel is no longer active in this form, but their videos are still up on Youttube. DMShane and his RtG gang paved the way for many other Greyhawk fans to stream their games, and during the COVID-era make online gaming more entertaining to watch. Indeed, this is where me and Anna Meyer got our start doing Legends & Lore! I know a lot of the cast still, and have game with one or more of them since these early days. There will be many more old posts like this to come, but look back on these years as a historically significant jump forward in the Greyhawk community.
Posted by Mike Bridges at 11:26 PM

I'm not sure what a bloodhunter is (some kind of ranger subclass?) but I find it interesting that all the characters sound reasonable. Nobody picked a ridiculous race/class combo like Orcish Bard or Gnomish Barbarian which seems to be par for the course for this kind of thing.

I'm glad you asked cause I intentionally didn't put that in the write up. From what I gather its a homebrew class. Based on what? I'll find out next week lol.

Found the Bloodhunter class used by one of the players...
geekandsundry.com/wp-content/uploads/2015/12/Blood-Hunter-Class-1.2.pdf

Twitch have now deleted Episode one (you will get a snarky comment about owning a time machine if you try to watch it).

However Return to Greyhawk have Episode 1 up on YouTube.