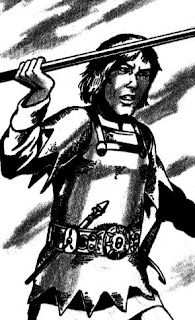 Greetings again fans of Greyhawk. Today I'm revisiting a fun feature on Greyhawkery: Let's Fight...(insert deity name). If you haven't seen my previous installments involving Istus, the Lady of Fate and Ulaa the Stonewife, then click the links and catch up. This time we will be facing off against a "lesser" deity named Trithereon the Summoner, god of individuality, liberty, self-protection and retribution.

The premise is like this, back in the days of AD&D, it was entirely possible for PCs to take on gods. The 1E Deities & Demigods is loaded with stats and rules on the powers of these beings. This template carried over to the early Greyhawk products and articles thus giving the DM an option if divine wrath ever needed to be carried out. These gods were damn tough but not impossible to kill. Hit points capped out at 400, AC never went higher than -10 (AC 30 by today's rules) and most had very high magic resistances. Now let's examine how foolish it is to attack the god who can summon aid!

Trithereon is a chaotic good champion of the oppressed who seeks to end those who deny life or freedom. So by now, your characters should be apologizing to him if he ever appears, because he is the one usually doing the hunting. Despite popular lore, Trithereon like many deities and demigods does tread upon Oerth (Guide to the World of Greyhawk). He appears as a young man with red-gold hair wearing violet garb and golden chainmail (AC -4). Yes, it's hard to mistake Trithereon.

Should you manage to get the jump on Trithereon (Dex 20) he has two epic magic weapons and an artifact-level baton:

1. His spear is called the Harbinger of Doom. It is a +7 spear. Plus. Seven. This weapon is from an edition where +5 weapons were the pinnacle. What's more, Trithereon can throw this spear and it returns to him in the same round.

2. His broadsword is called Freedom's Tongue. This weapon is +6. That's right, Trithereon has two epic, artifact level weapons that can probably break your favorite +5 vorpal sword in half. What's worse, Freedom's Tongue causes fear in a 30-foot radius to all his opponents. That means you.

Now if your PCs haven't ran by now at the appearance of a man in golden armor shouting the name of two lethal weapons, then they might still have a chance. Trithereon isn't the most robust of avatars with only 162 hit points, but he is only harmed by +3 magic weapons and has an 80% magic resistance. He also only fights as an 11th level fighter with 2 attacks. So yes, he can be brought down, but you have to get through his protection first. Trithereon is never alone...

3. Most fearsomely, he carries the Baton of Retribution which among other powers like planar travel and imprisonment, can summon planar creatures to fight on his side. Usually these magical animals have already been called to aid in his hunt for criminals. They are:

Nemoud the Hound, an iron jawed dog that hunts as a 20th level ranger and can never be surprised. You can't hide and you can't ambush them.

Harrus the Falcon, a huge bird with the sharpest vision ever. Distance is no factor to this group.

Ca'rolk the Sea Lizard, a 40-foot long crocodilian monster whose main skill is capsizing vessels. Yes, water is no escape from Trithereon.

If any of these companion animals are slain they return to their home plane and reform to fight another day. You are still not daunted by mere animals? Well the Baton can also create a gate once a day which summons one of each kind of Devas. In 1st edition there is three kinds of devas (D&D angels):

Astral Deva, genius intelligence, swinging +3 maces and armed with an array of magic abilities like invisibility, dispel magic and curing wounds. They are able to travel the astral and lower planes with ease.

Movanic Deva, still very smart, also with magic powers and use +1 flaming swords. This guy is most commonly found among mortals.

So there you have it, a melee unlike any your players have ever seen. A deity armed to the teeth, three animal companions and three very smart angels versus a party of out-matched, out-maneuvered mortals. Best idea is to lay down your arms and face Trithereon's judgement. 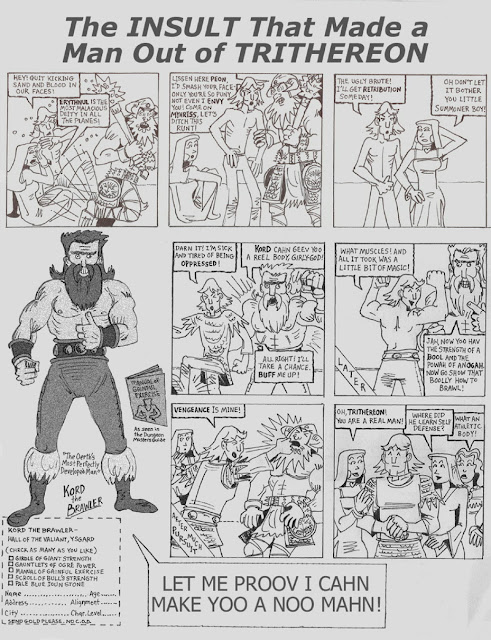 The comic is hilarious! Thx for the laugh, and there is no way I’d take on that guy...

This is one of my favorites.

Excellent content Mike! A little tidbit I expanded on in my campaign. The Trithereon worshippers really HATE the LN Pholtus worshippers; both are increasing in numbers in WoG. Some great tension and political intrigue that is not the normal Good vs. Evil!

Nerman: Thanks man, it's one of my earliest and most favorite comics too.

Carlos: How I came to pair Kord and Trithereon I'll never recall. It was divine guidance.

Lord Gosumba: Hey I really like that. In my campaign there is a Trithereon branch in Perrenland who actively hunt criminals. The Long Cloaks of Krestible.

Mystic: Nothing like a blast from the past, eh?