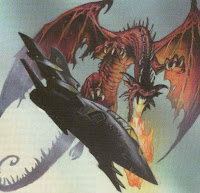 Welcome back Greyhawkers. Well I don't have my copy of Ghosts of Saltmarsh yet and our Legends & Lore stream show returns in a couple weeks, so for now I'm going to do one of my favorite things and talk about random published Greyhawk tidbits. This time I'm going to peruse some stuff from Dungeon and Dragon Magazines. Let's dig in...

Dragon #277 had an interesting article called Greyhawk 2000 by Philip Athans. This article was an example of advancing timelines in a fantasy world that includes gods, monsters and magic. I had to look it up again because I thought I was dreaming this happened. Guns, automobiles, fighter jets, etc. Indeed it reminds me of the near-future-fantasy of Shadowrun, but without proliferation of cybernetic technology. If Mr. Athans were to update his article to be "Greyhawk 2020", I'm sure there would be even more familiar concepts from real life entering the Flanaess (like smart phones). At any rate, check out this wiki Greyhawk Timeline that includes the future-hawk events, it's good for a fun read.

Raiders of the Black Ice by Wolfgang Baur of Kobold Press fame, can be found in Dungeon #115 and it is one of my favorite Greyhawk adventures from the magazines. This adventure was a tie-in to the 3.5E environmental splat-book Frostburn. This book involved arctic settings and was my favorite of the series. Using it to run in the Land of Black Ice was just perfect. RotBI has more than black ice and surviving the elements, it has frost-folk, automatons and an amazing map of Blackmoor region by Rob Lazaretti. If you don't own this issue, I highly recommend it. 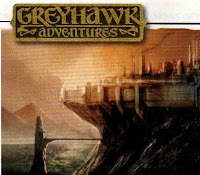 In Dragon #351 is the long overdue article Irongate - City of Stairs by my good friends Gary Holian and Denis Tetreault. The guys had an Irongate Project in the works for ages and this sadly short offering was published by fellow Greyhawk loremaster Erik Mona before the tragic end of Paizo's run on the magazines. While there is so much more to Irongate, they capture the history of the free city and manage to develop some cool stuff for an otherwise untouched part of the setting. One thing is they tie the mysterious World Serpent Inn to the city making it a multi-planar destination for some NPCs. Another thing is a sidebar on Oerthblood. This rare material also known as blood-iron, is unique to the World of Greyhawk and is useful in crafting weapons and armor. Before the stuff is even enchanted it grants a +1 luck bonus to hit or variable damage resistance. Want some of that? Go to Irongate!


Lastly, is a treat from Dragon Magazine Annual #3 by Noel Graham called Falcon's Bazaar. This article made during 2E I believe, covers a bunch of intriguing mundane items that can be found in the markets throughout the Flanaess. It reminds me alot of Aurora's Whole Realms Catalogue which funny to say, may be my favorite FR book of all time. In Falcon's Bazaar you can find items you never knew your character needed, like Bronzewood Portals for your bar (20-175 gp for doors, 11-85 sp for shutters), Luminous Paste made from Phostwood trees to help mark your way in the Underdark, Rhizian Shield 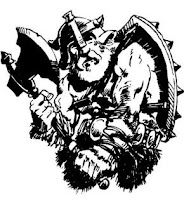 Harness for barbarians who need to use two-handed weapons time to time, and chewable Tamal Leaves from the Amedio Jungle for hardened adventurers who are too cool (or disgusting) for halfling pipe-weed.

That's all for, good luck finding these articles, they are all timeless and useful in any edition of D&D. You won't be disappointed. Until next time!

Oh awesome! Phostwood luminous toothpaste would be a great party trick, and I have heard that the Amedio leaf is now legal in certain parts of the Flanaess.