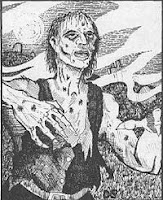 Howdy Greyhawkers! I was looking for something to write about this weekend and lo and behold this old column popped up. If you haven't seen my A to Z posts check them out on the Best of Greyhawkery HERE. I've covered people, places, deities and magic, so why not monsters? This is generally going to be about D&D monsters, but I guarantee I'll give my Greyhawk angle to them. Enjoy!

Aarakocra: What's an Aarakocra? Well they are bird-folk from Fiend Folio of course. They are misspelled as Aarakoora in the World of Greyhawk Glossography encounter charts. You can find these winged creatures in the Corusk, Griff, Rakers and Lortmil Mountains.

Bulette: I have never used a bulette that I can recall. The Monster Manual says these armored burrowing monsters are also called landsharks and they might be the creation of a wizard. As for Greyhawk, apparently half-strength, sand bulettes can be found in the Sea of Dust. Beware!

Drider: You like drow? You like giant spiders? How about a drow-spider hybrid? These things are supposed to be cursed drow who fail Lolth, but serious they seem like an upgrade to me! I need to use them more.

Ettercap: Speaking of spider-kin, I never understood Ettercaps or whatever their historical origins. In D&D they are spider-men that over the editions get less and less human-like in description. An interesting theory says Ettercaps were once mad druids that changed into these things and never came back. Whatever the case, aren't there enough spider-things in Greyhawk?

Firbolg: What does Greyhawk have more of than spiders? Yeah, giants. In MM2, there was three new minor giants introduced, Verbeeg (skinny intelligent ogres), Fomorians (deformed hill giants) and the Firbolg. These giants are hermits and have magic power. Among them, they can appear small. In 5E, I'm not sure what Firbolg are like, but I'm sure it's a change from 1E. Historically, Firbolg I believe are from Celtic myth? *shrug*

Grung: If you are relatively new to D&D you might even know what the toad-like Grung are thanks to 5E's Tomb of Annihilation. Cool but I'm fairly certain they are Greyhawk originals, seen in the hardback Greyhawk Adventures. Though I've never used them, I imagine they are frog-gnomes from a playable race standpoint.

Horg: Want to know what the scariest monsters is in all of Greyspace? It's the Horg hands down. Fortunately for you Oerth-bound adventurers, they inhabit the vacuum of the asteroid belt Grinder. They are bat-like humanoids who can phase and have poisonous attacks that would worry even Tiamat. I could go into more detail, but you'll have to trust me, Spelljamming isn't a cake-walk.

Illithid: aka Mindflayers, these monsters are another I've underused in my DM career. I wager it's because of their psionic-ness. I've never been a fan of psionics. Also, rumor has it there is an Illithid lair in Riftcanyon. They apparently like collecting Greyhawk lore too. Take my word for it.

Jermaline: I love sneaky, underdark creatures like the Jermaline. Also known as bane-midges, these little guys were created by Gygax and first appeared in Fiend Folio. If you don't own the original FF, get one now! It's a classic. In the World of Greyhawk, you can even find Jermaline in the tunnels of the Sea of Dust.

Kech: Off the top of my head these are tree-dwelling camouflaged simians? I believe they were in MM2 and Ghost Tower of Inverness as I chose to replace them with Chokers because they haven't been converted to 5E yet. 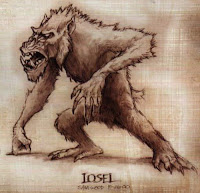 Losel: Speaking of which, Losel are like primitive orc-baboon crossbreeds. Apparently Gygax first used them in his novels and they made their way into the setting lore as creatures brought to other forests of the Flanaess by Iuz and the Scarlet Brotherhood. As for my home campaign? Hard pass.

Manotaur: Anyone else remember this guy? No, not minotaur...manotaur.  I think it was in Greyhawk Ruins, but I can't seem to find it because I tore all the monster pages out to add to my 2E Monster Manual binder that I obviously didn't take good care of. Ah well, I know I didn't imagine it.


Norker: We have alot of spiders and giants, but Greyhawk also has tons of evil goblinoids. Not quite goblins, not quite hobgoblins, Norkers are fun because their hide is so tough they don't need armor. Otherwise, they're just extra-hard-to-kill goblins. Try em out! I do believe Iuz is doing just that in his armies.

Ogre: Ogres are everywhere! But did you know there is an ogre hang-out near Hardby called Ogremeet? Coincidentally in the adventure Greyhawk Ruins there is evidence Zagyg Yragerne was making rings of ogre control. Ogre army perhaps?

Pernicons: I have never used these grasshopper-like pests, but if you don't know what Pernicons are then check out this old post of mine that mentions them. Fiend Folio is the best! Look for these nasty swarms in the Sea of Dust and Bright Desert.

Quaggoth: Found mainly in the Burneal Forest, I like to think of these fuzzy bear-folk as D&D's version of Chewbacca. In Age of Worms they introduced an NPC Quaggoth who got some culture. I'm unsure if any edition of D&D has made them a playable race though.

Remorhaz: There is few creatures in the frozen north lager and scarier than "frost worms". They have such hot cores that being swallowed by a Remorhaz is one of the worst ways to die. I picture these being common around they geyser filled Land of Black Ice.

Swordwraith: You can probably imagine what these are already. Indeed, they are intelligent undead swordsmen from old battlefields who still gather and plot and raid! Originally in Greyhawk Adventures, it says they are most likely found in the Stark Mounds, but can be at the site of any battle. I can think of a few spots that would be crawling with these guys.

Trolls: I've gone on how there is many kinds of giant, arachnids and humanoids in Greyhawk, but let's not leave out Trolls. They apparently can adapt to ANY environment and even mate with ettins and things. Now that I think of it, they are classified as giants, so never mind. My favorite is Ice Trolls, cause well, who is going to protect you from the Remorhaz until you kill them off?

Unicorn: Who in the 80's didn't watch the D&D Cartoon and instantly want to use unicorns in their campaign? Oh yes, there was also The Last Unicorn cartoon and the movie Legend. It's amazing I barely used them until 3rd edition. When I did they were in Welkwood and Silverwood.

Volt: Are your players tired of yet another predictable Stirge attack? Okay, send Volts after them next time! Another fine creation from Fiend Folio that hasn't translated over to later editions. This is remarkable because it made the top 10 vote for best monsters in the book for White Dwarf magazine. They basically work like Stirge, but while they are draining blood they also whip you for electrical damage. You're welcome!

Will-o-Wisp: Speaking of electrical damage. The "WoW" is a creature I've underused and I can't figure out why. They are fast, evil and pack a punch. Glowing orbs that like to lure people into haunted ruins and traps also rates high on the DM toolbox. Muahaha.

Xvart: These creepy blue goblins are everywhere. Verbobonc, Bone March, Bandit Kingdoms, Vesve, Horned Society, etc. We all should know about their precocious deity, Raxivort, but I remember a VERY obscure xvart from Living Greyhawk Journal named Xiq-Ciq. IIRC he is the "pet-friend of a Komali noblewoman.

Yuan-ti: Everyone knows about these snake-people. The fun thing about them is the variety of yuan-ti that have been created over the years. This makes them seem more realistic and fearsome because you never know what you may run into next. I'm positive they rule wide swathes of Hepmonaland, but outside the jungles do yuan-ti roam the Flanaess?

Zombie: Sure, any priest of Iuz can raise them, but let's try out a new scenario more in line with our TV and movie zombies...

I believe the Manotaur first appeared in CB1 "Conan Unchained".

Oh wow, I think I have that! I need to go check.