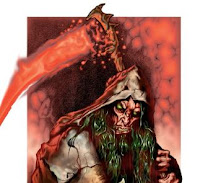 Welcome back Greyhawkers. Today I'm revisiting one of my favorite columns and that is fighting deities! If you haven't seen the previous ones, head back and read about Istus, Ulaa and Trithereon. This time we are going to tempt your players with the ultimate showdown, death himself: Nerull!

First let's quickly recap: in the old days of AD&D, PCs could potentially take on gods (despite what canon says about gods staying off Oerth). The 1E Deities & Demigods was first to give stats and rules on the powers of immortals, later referred to as avatars in the Greyhawk Adventures source book which gave players a better chance to somehow prevail over a deity in combat. That said we are going with the full-power Nerull stats from the original World of Greyhawk boxed set; let's examine how difficult it will be to beat death at his own game.

Make no mistake players and DMs, Nerull is the personification of death and night. He is the Foe of all Good, Hater of Life, Bringer of Darkness, King of All Gloom and the Reaper of Flesh. Killing Nerull in combat may as well be like trying to kill Beory, the Oerth-mother when she is the personification of the planet! Of course, in this scenario, Nerull has chosen to take a form to tread the plane of mortals in person and do some culling, but the heroes are here to stop him for whatever reason because Nerull obviously cannot be reasoned with!

No surprise to anyone at your game table, Nerull appears as a seven-foot tall, rusty-hued skeleton in a black cowl cloak with sickly green hair (or is it vegetation?), eyes, teeth and finger-nails. Not a pretty sight. The cloak and his rusty bones provides an impressive AC -6 (26 in present D&D). Nerull carries one object, his not-at-all unassuming sablewood staff.

Nerull has superior senses in every way including magical darkness. It is said he cannot be surprised except by "extraordinary means". Perhaps this means, invisibility, or maybe the heroes just pretend to be dead bodies to ambush him, I don't know...however, bony Nerull is lightning fast with a Dexterity of 21. One more thing to note, in AD&D rules, Nerull can only be harmed by +5 weapons. In later editions like 5E this could mean magic weapons in general or maybe just legendary weapons. That's up to each DM. Let's assume your heroes know this, since he is literally the grim reaper, and they brought their best holy avengers and artifact swords. Also, Nerull has 100% magic resistance. That means wizards and clerics are on support in this fight.

If the PCs manage to go first in combat and can hit and harm Nerull, they will find he has 400 hit points, which in AD&D is the highest possible total allotted to gods' avatars. In later editions Nerull probably has something ridiculous like 2000 hit points, but that doesn't matter because unless the PCs manage destroy Nerull in one well-orchestrated round, Nerull only needs to attack once.

1. His staff is called Life Cutter and on command a scythe blade of red magical force emanates from it the tip. It is a +5 weapon which means he can harm other gods with it, much less pesky heroes. Those hit by the scythe must make a Saving Throw vs Death Magic or die instantly! Now in AD&D characters could be instantly killed by a single attack. This is why the Tomb of Horrors is so famous. The players should expect no less of the god of death. In later editions (which I'm not going to reference) I'm sure Life Cutter is nerfed by a saving against additional necrotic damage. At any rate, Life Cutter sweeps in a path 10' long in a 180 degree arc. All creatures in that path are hit automatically, even if they are astral, ethereal, incorporeal or gaseous in form! Even if you happen to make your saving throw, the unlucky bunch in that arc of death take 5-30 damage. Fortunately for the heroes, he only gets one attack per round. So spread out...

2. Now, Nerull has been around since the beginning of time, so he is probably bored of killing mortals with his scythe. That is why he will most likely toy with the characters in other ways. One way he can do this is by casting a "clump of darkness with ebony tendrils" to attack his foes. Yes folks, Nerull is the originator of Evard's Black Tentacles spell. Except these tentacles can kill you fast. It's a 10' diameter blob with 4 tendrils that stretch 10' per round into a quadrant. Anyone touched by a tendril has to make the same Save vs Death as Life Cutter. Even surviving this a hero takes 3-18 corrosive damage and is grasped until it's destroyed. Lucky again, Nerull can only use this once a day.

3. If Nerull is particularly bored or distracted, he can summon three demodands to fight for him. Demodands are from Nerull's home plane of Tarterus. While not particularly fond of Nerull, the demodands likely will enjoy having a stretch on Oerth and will delight in killing your characters.

4. While the PCs are busy fending off black tendrils of death and nasty demodands, what is Nerull himself doing? Having fun of course! He is the patron god of assassins after all so maybe he wants to kill the PCs one at a time. Since he can fly at will and travel to virtually any plane when he wants, this means the Reaper doesn't stand still in a fight. Adventurers trying to hide or stand in the back ranks can expect special treatment by Nerull. The god of death has a tool belt of murderous cursed magic items to use on his enemies, such as the Necklace of Strangulation, the Rug of Smothering and my favorite, the Bag of Devouring. You know it's personal when Nerull uses these tricks on your poor character.

So there you have it. Nerull can be defeated by a properly armed and sufficiently high level party, but no one is coming out of this fight unscathed. Even if destroyed, Nerull will be back for the victors someday, he has all the time in the world. In the more likely event of a TPK however, Nerull will just leave the character's bodies there for someone else to clean up. And if the heroes are resurrected, Nerull will be just fine with killing them a second time...

Randomly stumbled across this today. Oddly enough, was a wonderful read and what seems to make for an enjoyable avatar fight. I've adopted the name Nerull/Fleshreaper since a little before 2007 and just wanted to say how much I enjoyed this article even though it's 2 years old. (Gravedigging posts doesn't apply here considering the content!(

Thanks man! And guess what I still read comments on this blog. Since you're the first to comment on this one, that makes it even better, I "dig" that you're all about Nerull and I'm glad this was an entertaining read for you!