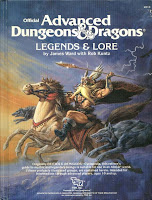 Greetings Greyhawk readers! If you've been following my blog or the weekly chats on our show Legends & Lore, you'll know I've been nostalgically going through my old 2E campaign material and posting it to showcase all the wars that I've waged on the Flanaess. In the middle of this "Silver Age" of D&D, my gaming group created many fun things and one that has stood the test of time is the power group known as the Night Shadows. Created by my best friend Jayson, the original Night Shadow was his fighter character in our 1E AD&D campaign, that was transitioned in our 2E reboot to become an order of barbarian heroes devoted to the Norse Pantheon. Of course back then we used Odin, Thor, Loki, Sif, etc. Not only was I a huge fan of Norse myth and Mighty Thor comics, but the Thillonrian culture was obviously based on vikings. The Suel pantheon besides Kord never screamed barbarian to us so we injected the gods we knew since we were kids to Greyhawk. By the time Carl Sargent brought Vatun, the Blades of Corusk and the Greyhawk Wars to the game, we were already deep into this campaign. Jayson in fact had two characters become Night Shadows, most notably his favorite fighter, Valkaun Dain who would go on to become the greatest of his order. 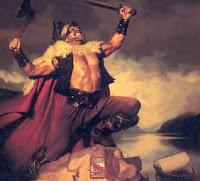 All of this preface is to explain that for the purposes of this article I am reverting the story of the Night Shadows back to solely Greyhawk mythos so it can be easily incorporated into your own campaign. Naturally, switching between Vatun and Odin shouldn't be hard, so go with whichever works best for your own game. Now onto the story. Enjoy!

Legend of the Night Shadows

As legends tell, many centuries ago a shadowy demon lord and his mindless hordlings were loosed upon the Thillonria Peninsula. In their path of destruction, they razed an untold number of small villages until they ascended the heights of the Corusk Mountains, where the demon lord conjured the Night Shadow Keep, an area perpetually shrouded in gloom. Kings of the three great barbarian tribes united against this common enemy and sent their armies to break the foul keep and slay the demon within. The demon-keep was near unassailable however, and as each barbarian assault failed, the fiendish defenders seemed to grow in strength. Just when the siege looked hopeless and the enemy was set to deliver a final crushing blow, a great barbarian warrior on an eight-legged horse charged down out of the clouds, and challenged the demon lord to face him in single combat. 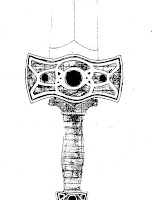 Seeing this impossible hero’s arrival, the demon lord was enraged. Undaunted, the fiend finally came forth from his keep, his body shrouded in shadows, except two glowing eyes burning with hate. As the two figures clashed, the weary Thillonrians suddenly realized that their savior was Vatun, the Great God of the North. The barbarians fell to their knees in awe as the demon lord was easily vanquished and his minions faded into nothingness. Vatun then lifted the fallen demon overhead, transforming the beast into a black jewel the size of a man’s fist.

The God of the North then gave this stone to his priests upon the battlefield. Before he departed upon his steed, Vatun instructed that once every five years, the tribes should hold a ceremony in remembrance of what he did for them all, and at this ceremony they should gather their finest young warriors for a holy competition. The priests of Vatun then took the keep as their temple, to be shared equally among the three great kingdoms. On the day of the ceremony, the Night Shadow Stone mysteriously disappears from the temple and is hidden within the vastness of the Corusk Mountains. Fledgling heroes summoned from all corners of the peninsula, compete to find the stone and bring it back to the Night Shadow Keep. Over several days, this hazardous trial often takes the lives of some, but ultimately the one who is worthy returns with the demon-stone. The priesthood then sanctifies the victor, who then joins the ranks of the Night Shadows serving Vatun from this temple-keep. Each new member is bestowed a ceremonial sword indicating that the hero is a chosen of Vatun and guaranteed a seat at his table in the afterlife. 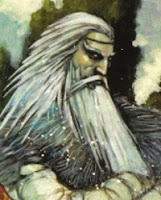 This tradition has continued unabated for several hundred years, even long after Vatun’s imprisonment by the evil winter god Telchur sent the priesthood into a steady decline. It is speculated by cynic sages from the “civilized Flanaess”, that Vatun’s faithful have always conducted the Night Shadow trial by their own devices, modifying it as needed to pick the best candidate. Nonetheless, the presence of a chosen of Vatun has often been a unifying force among the Suel barbarians in times of crisis. Always of the adventurous sort and few in number, the Night Shadows are the closest the north has to a knighthood or paladin order. Like the priests they serve, their highest goal is to free Vatun and unite the barbarian kingdoms. Indeed, it is said that in the past more than one hero who has wielded one of the five famous Blades of Corusk has been a Night Shadow.