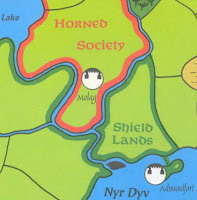 Welcome back Greyhawk historians. As promised, this is the continuation of my personal 2E campaign material from the 1990's, a turbulent phase where I had the Flanaess constantly at war. For context read my Prelude and if you want, skip ahead a few decades of game time and read my original three-part Furyondy-Iuz War. At any rate, let's kick this off with the Great North War. Be sure to also check out the footnotes and commentary at the end of the article. Enjoy!

Heavy assaults by the Horned Society had incited a war with the Shield Lands and Furyondy and after a year of bloodshed, the combined Knights of Hart and Holy Shielding had drove the aggressors back to their fortresses. Meanwhile, the elves of the Vesve began to strike out into the Lands of Iuz. The Old One had recently returned from a long absence1 and rallied his evil forces to push the invading elves back to their forest borders.
To the east, barbarian alliances began to crumble after the discovery of the false Vatun, who was in fact Iuz in disguise. The alliance was miraculously held together due to a noble effort of diplomacy by the divinely chosen Night Shadows. The Hold of Stonefist though, ended up siding with Iuz after secret talks. Nyrond and Almor begin to call men to arms at the rumors of war. The Great Kingdom and the Sea Barons were already poised to attack their neighbors, however the North Province, Bone March and Medegia remained silent. 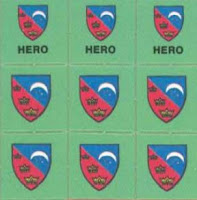 The Great North War as it became known, broke out as Thillonrian raiders landed at the mouth of the Trask River and defeated the North Provincial army2. Simultaneously, the northerners attacked Sea Barons waters in force. These naval clashes ended in no victor, yet the barony was quick to regroup.
In the south, Herzog Chelor answered the call to the arms by “mad” Overking Ivid V where the North Province refused to obey. At the same time, the County of Urnst and the Theocracy of the Pale allied to Nyrond’s side fearing the growing Aerdian threat. The Duchy of Tenh then allied with the Pale3 to fend off assaulting Fists led by Sevvord Redbeard.
To the west, the margrave of Bissel, Walgar supported Furyondy/Veluna with it’s Border Companies. Iuz made no moves, sitting in silence and gathering his forces to do battle again. Near the end of the year, the forces of Ahlissa swept into Almor, seizing the small prelacy at Chathold. Almor was not finished though, its remaining army was soon to be aided.

Early in the spring, a now healthy King Belvor of Furyondy left his armies in the command of Prince Alaric and Grand Marshall Ulrich. Belvor travelled with other ambassadors to meet in the south, where Keoland, Gran March and Celene pledged material support to the king in the event Furyondy might fall.
In the Hold of Stonefist, Sevvord Redbeard was hit from two fronts. First his Fists were defeated at the Battle of Frozen River by Cruskii warriors4, while the Duchy of Tenh launched a surprise attack into Hold. Sevvord focused his strength here and held off the advance of the Tenha army.
In Almor, Chathold was quickly retaken by the alliance of King Archbold of Nyrond. The king wasn’t satisfied with just liberation, as he divided his forces into a second wave that swept into the South Province, doing much retributive damage to the Herzog’s armies. 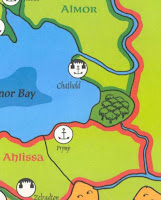 A coalition army of Furyondy, Veluna and the Shield Lands managed to break through enemy lines, striking for Iuz’s capital, Dorakaa where it was seized5. Despite this loss, the Old One was not finished as it was revealed he had amassed his main body of forces to the north in the Howling Hills for a counterattack.
To the east, the Barbarian alliance led by Valkaun Dain continued to pillage and attack the Overking’s dominion, all the way to the capital, Rauxes6. Overking Ivid fled with much hatred to the See of Medegia. There, its holy censor was supreme and was not totally welcoming to the impetuous monarch. The Overking eventually escaped along with his escort to the isles of the Sea Barons. It then seemed, if Herzog Chelor would fall, that Censor Spidasa would be left in charge of the Great Kingdom.
Nearby, Onnwal was the only Iron League member to come to Nyrond’s aid. Its naval fleet ensured that the Ahlissans wouldn’t be able to sail across the Azure Sea to seek help. Unusually enough, Keoland had negotiated with their old foe the Sea Princes into remaining neutral instead of entertaining an alliance with Herzog Chelor in the east. Eventually, Ahlissa folded once King Archbold set his boots upon the courtroom floor at Zelradton7.

The Great North War was drawing to a close as Furyondy’s noble alliance spread further into Iuz’s domain, routing the remaining humanoid armies under the god of evil’s red banner. Iuz was never found. He went into hiding, waiting for another chance to rule the Flanaess. Almost a month later, the fortress of Molag was sieged and conquered, thus ending the remnant of the Horned Society’s threat to the region, sending the Hierarchs into hiding as well. The alliance’s victory was complete.
To the east, King Archbold and his allies began to occupy all the Aerdian states and counties. The war was effectively over as Censor Spidasa withdrew into Medegia, the Sea Barons sued for peace and the North Province still wouldn’t come to the aid of their Aerdian cousins. The Great Kingdom was no more. Post-war, there was a call for peace conferences, one in Chendl and one in Rel Mord. This would prove to be grim as the peace talks only initiated a new set of events.

Footnotes on the Great North War
Commentary: Regrettably, I strongly recall this war was informed and conducted using the Greyhawk Wars board game. The Great (Northern) War is a suggested event in the rulebook of this boxed set. The fact that I hinged actual campaign events on the outcome of this silly board game is incredibly foolish in hindsight. At least I managed to write a narrative to make it all sound plausible.
My best guess is that I as DM played the Great Kingdom and Iuz, while my friend Jayson was Nyrond and the Barbarian alliance. Jayson was heavily involved with his character Valkaun, and his creation, the barbarian power group called the Night Shadows would go on to be pivotal in our 2E campaign (more on them in a future blog post). Our friend Brian was likewise the player of Furyondy's alliance since his character Angus Ulrich had rose in the ranks of the Knights of Hart and was their Marshall.
That the forces of evil lost this war is a testament at how easy it is for Good to win this board game in my opinion. Mind you, I am no slouch at war board games. If I might brag a moment, I have never been beaten at Axis & Allies (come at me challengers!) so having control over two evil Flanaess armies at once and losing both just isn't in character for me.
How the Horned Society started things off, I'm not sure. Driving the Hierarchs underground definitely sets up one of my favorite villains, Andrade Mirrius to become a major antagonists for my players.
One thing I did like about the Great North War was unlike published events of the Greyhawk Wars, the "Thillonrian North" did take part this time. Carl Sargent had originally set this up in the modules Five Shall Be One and Howl From the North where the five Blades of Corusk are used to summon Vatun and unite the north. But the following Wars boxed set failed to include them in any meaningful way except to say they were duped by Iuz. In our 2E campaign, the barbarians remained united and as you will see in the next several installments of this series they are important players in world events. Until then, thanks for reading!
Great North War 605 CY to 609 CYGreat Kingdom War of Succession 610 CY to 611 CYPomarj-Celene War 610 CY to 613 CY3-Month aka "Scarlet" War 613 CYSchnai Civil War 615 CY
Aerdy Civil Wars 615-616 CYThe Greyhawk Wars aka "The Bandit War" 617 CY to 618 CYBattle of Bellport Harbor 623 CYIuz-Furyondy War 627 CY to 629 CY (Part 1, Part 2, Part 3)
Update 06/27/2021: Added links to the entire War series for ease of reading. 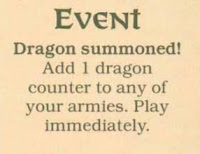