Hey Greyhawkers! So we all know there is going to be a D&D movie soon. Some rumors say late 2021, but IMDB seems to think 2022. Hard to tell in the COVID era. Could end up straight to Netflix. This is an early synopsis of the movie (which in 2020 we found will star Chris Pine which I have mixed feelings about): "The upcoming Dungeons & Dragons movie currently in development by Paramount will focus on a group of adventurers looking for the Eye of Vecna, a powerful artifact that dates back to the earliest days of the game. Our source indicates that Dungeons & Dragons will feature a group of adventurers led by Raven Hightower, a warrior with a magic flamesword that’s haunted by his sister’s death. Other characters include the “half-dragon” Hack Karroway, the gnome thief Olivan Trickfoot, and a masked warrior named Alyssa Steelsong who is set to take over Palarandusk’s role when the dragon dies. Additionally, the main villain of the movie is a male drow named Razer Horlbar who once kept Raven and his sister as slaves, along with a female tiefling named Damala and a brutish warrior known only as “The Beast.”"
This hits quite a few modern D&D hallmarks, tieflings, drow (Razer tho?), dragonborn (I assume) and sassy gnome thieves. Nevermind that this will be tentatively set in the Realms (the dragon Palarandusk is evidently from that setting), knowing Hollywood they will botch it. At any rate, I've lately been intrigued by two correlating things, one, the rumored plot involves the Eye of Vecna and two, the fact Wizards of the Coast (and Wizkids) is pushing Vecna merch suddenly. I'm not going to link to the march sites though, I'm just showing this stuff. You can easily find them on your own if you're interested. Check it out: 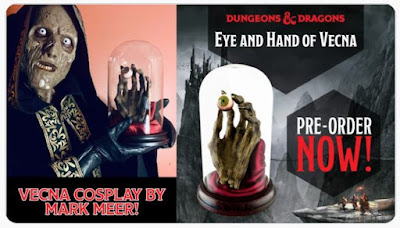 Posted on Twitter, coming soon, trophy Eye and Hand of Vecna by Wizkids. This will set you back quite a bit because of the anti-magic jar I assume. I definitely dig the Vecna cosplay, I'll give them an A for originality. Would've been an A+ if he had only one eye though! 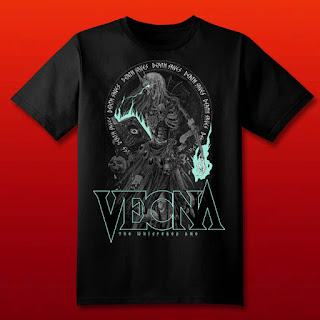 In the Christmas issue of Dragon+ (the digital descendant of old print Dragon Magazine) Wizards showcased a bunch of stuff, among them this sweet shirt. Now this I can get behind. Vecna is going to get more merch soon, you watch. This movie might feature the eye, but you can't really do the item justice without the Hand, so plot device for D&D 2? Once you have both items, Vecna himself can't be far behind! In the meantime, here is some other Greyhawk-y merch from that Dragon+ issue (more of a product catalogue really): 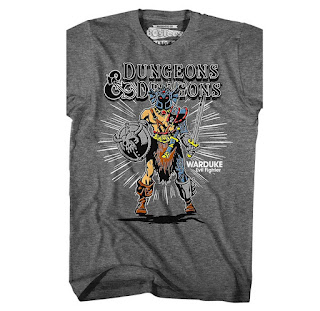 Warduke. There is a TON of D&D themed shirts out there on the interwebs. This one speaks to me as does anything D&D cartoon related. 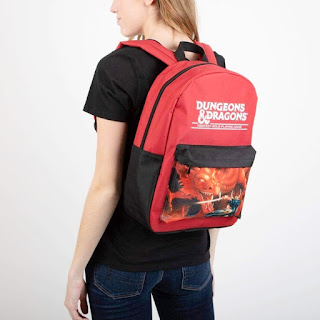 Sure you have dice, dice bags, dice towers, DM screens and all the rule books, but do you have a D&D backpack to carry them in? I bet you don't! 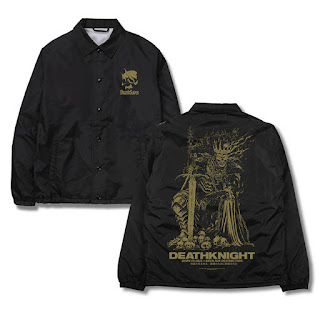 Lastly, courtesy of Joe Manganiello and Death Saves is a sweet St. Kargoth "Death Knight" jacket. I know a few Greyhawkers who would die to have this.
That's all for now. Let's hope the movie comes out sooner than later. Between comic book movies, LotR, Game of Thrones, and Star Wars, this has been a golden age of nerdom in my opinion. Fingers crossed that D&D becomes even more pop-culture.
Posted by Mike Bridges at 7:23 PM