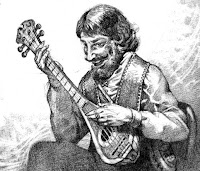 Hail heroes of Greyhawk! I don't have much going on this week so why not check out this cool song on YouTube produced by an amazing Greyhawk fan, 3orcs (StylinLP38 on Canonfire). It's a cover of a classic song sang with lyrics that are spot on a historical account of the battle:"The Ballad of the Battle of Emridy Meadows was a critical military event in 569 CY in which the allied forces of good sacked the Temple of Elemental Evil and dispersed hordes of its cultists. Emridy Meadows itself is a series of grassy clearings south of the Velverdyva in the World of Greyhawk. The idea behind this video is to convey Greyhawk history to the players in a campaign without reading box text to them out of a book. That the bard Greg Laughlighter playing for his meal at a local tavern or inn. Like the Village of Hommlet "Inn of the Welcome Wench" of the T1-4 Temple of Elemental Evil campaign."
Kudos again to 3orcs for creating this inspired video. Share this song with the community, you will not be disappointed!

That was fantastic! Great song (especially if you recognize the original), and the accompanying pictures were wonderful.

Oh jeeze! Mike, you know I live on the shores of Kitchi Gumi ...

LMAO. Glad you guys enjoyed that. Kudos to the artists.