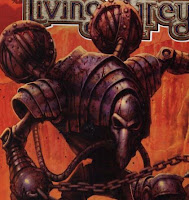 Well met Greyhawk scholars! One of my favorite things to do on the blog when I have nothing else productive to feature is to reference D&D publications and pick out obscure facts about the setting. What I love about Greyhawk (and D&D in general) is there is so much left undeveloped or unused that you can always find something new to discuss. I think this time I'll focus on deities. Let's get to it!

Heironeous: His religion reveres a magical holy avenger battle axe called Red Thunderbolt. It's made of magically hardened copper but damages creatures vulnerable to silver. It was made two centuries ago by a paladin named Azkava Mor who quested to the Nine Hells to rescue the souls of several priests before he eventually fell to pit fiends. Epic stuff. Check out Dragon #354, Core Beliefs: Heironeous by Sean K. Reynolds for more.

Nerull: In the earliest days of creation, during the Dawn War, Nerull was once a crafty human wizard who sought a way to help gods like Corellon, Pelor and the god of death, Aurom, to defeat the Primordials. He basically invents necromancy, was rebuked, got hurt that no one liked his ideas then slew Aurom and took his godly powers. Nerull too was eventually taken down by the wiles of another wizard seeking power, a woman who came to be known after Nerull's fall as the Raven Queen. This bit of heresy is compliments of Channel Divinity: Nerull by Matt Cavotta and Nicole Cardiff in Dragon #427 (4e digital era)

Hextor: I'm sure a few of you including myself have perhaps made use of the Blood Golem of Hextor. This brutal construct is essentially a large suit of full plate armor with two flails fused to the gauntlets and powered by the blood of 16 mortals fed into the golem by two reservoirs. Its a beast in combat, spinning and flailing at high speed, but it's very leaky and needs more blood every day. This fun golem will only set your priest of Hextor back 50,000 g.p. Get crafting by looking for Living Greyhawk Journal #8 in Dragon #292.

Kyuss: The popular demigod of wormy undeath is the BBEG of the 3.5e Age of Worms adventure path. What gets lost in this lengthy 12 issue story is that according to the Nethertome of Trask, the Age of Worms and Kyuss is but the harbinger of a new Overgod, inexplicably made of the fusion between Hextor, Erythnul and Vecna. The cult called the Ebon Triad pushes for this prophecy to occur. Needless to say these three gods' mainstream cults think the Ebon Triad are wackos. If you'd like to know more of these forbidden secrets, check out Three Faces of Evil by Mike Mearls in Dungeon #125.

Vecna: It is said the Book of Vile Darkness was originally a scroll penned millennia ago by a sadistic spellcaster, then was expounded upon by later cultists and necromancers until it was found by the arch-lich Vecna who then bound all the collected works into a proper tome. He made the cover from the flesh of a human face and the bones of a demon. Whoever that human was must've realllllly pissed off Vecna. At any rate, more on this evil tome and its unfortunate contents can be found (wisdom save required) in the 3.5e Book of Vile Darkness by Monte Cook.

Kurell: Some of you may know of this lesser god of thieves (and jealousy), but do you know he lives in Limbo in a domain called the House of Locks? Also, his biggest temple is in the Great Kingdom city of Atirr, but in the Wolf Nomads he is known as the cool sounding god, Black Wolf. Kurell appears as a tall handsome rogue, but spoiler, in reality he is anything but the suave thief he pretends to be. If you'd like to have fun with this obscure deity, I direct you to Dragon #263, the Oeridian Lesser Gods by Andy Miller.

Apparently I have some catching up to do ;)

Allan: Well that 4E era stuff is definitely geared toward their attempt to redo the cosmology of D&D. I think the Raven Queen was carried over in 5E and she is now some thing to do with Shadar-kai instead. As if Nerull could be taken down easily!

In my world, Nerull is an ancient god of winter and death, but undeath is heresy - an abomination of the true death that is his purview.

And he certainly has not succumbed to any wizard...