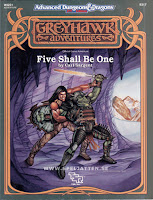 Welcome back Greyhawk cartophiles! This week I'm going to muse on a potential campaign development that I believe would make the NE corner of the Flanaess even more contentious. What I refer to is the orc city of Garel Enkdal, first and last featured in the module Five Shall Be One by Carl Sargent. After this huge underground city is encountered in the adventure, the city fades back into published obscurity, yet events continue to unfold around it. I say this should no longer be the case! For your reading pleasure, I have made a map below, to go along with this lengthy post so you can clearly see that Garel Enkdal is located in a place that a clever DM can use to really shake up a campaign and introduce some orc culture to their campaign. Enjoy!Garel Enkdal Overview: Also known as the "City of the Orc Horde", Garel Enkdal is an underground orc city state located in the western arm of the Griff Mountains, near Lake Abanfyl. Sources say the city has a total population of 25,000 orcs, though this total does not include ogres, ghouls, and other struggling humanoid tribes that live in proximity. Garel Enkdal is populated primarily by the Bloodied Blade tribe, and is ruled by a theocratic monarchy devoted to the one-eyed god Gruumsh. Garel Enkdal has gone untold decades without interacting with its neighbors besides occasional attacks on local dwarven clans, or Stonehold herders, trappers and hunters. Many years of content, divine leadership has allowed Garel Enkdal to grow and develop while nearby Duchy of Tenh and Stonehold have warred and depleted their populace. Even the dread Iuz the Evil and his agents have never been able to infiltrate or sway the Bloodied Blade tribe to join his empire. Only a handful of intrepid adventurers seeking to reclaim a magical blade from this city has ever dared to trespass in Garel Enkdal.

Description: Garel Enkdal is built within a series of enormous limestone caves, though the great central cavern where most of the population resides, is not entirely natural. The outer walls and vaulted ceilings in the main cave soar some 200' high, and appear as if a magical segmented sphere had once filled this chamber and has since been reclaimed by strange pinkish-blue stalactites that twist and hang down over the city (most do not notice this oddity or ascribe it to Gruumsh). There is no major light sources in the city as all its denizens are adapted to the gloom of the caverns. The city is a ramshackle assortment of tents, dwellings, and stone buildings. There is shallow underground streams and pools accessible to the cavern system as well as rocky corridors leading further into the Under-Oerth. 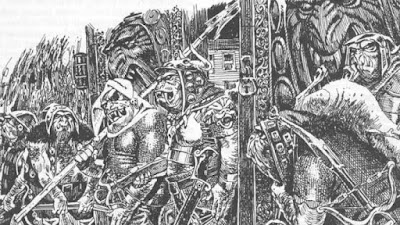 Life in Garel Enkdal: While most adult orcs are able to handle a blade or bow, not all in the city state are fully-armed, trained warriors. Many are merely herders, laborers, hunters, and gatherers. Resources are scarce in the underground city, so much so that even the standing army must assist in foraging and repairs. Surface hunters catch goats, wolves, deer, and other herd animals found in the lowlands. Other specially armed hunting parties set off daily into the Under-Oerth to kill aspis drones and steal their larvae which is considered a delicacy. Meanwhile in another part of the city, cave lizards are raised for a variety of uses from guard animals to food and clothing. There is also many sources of edible lichen found in the outlying caverns, along with fish and eels caught both underground and on the surface at Lake Abanfyl. All of these food sources are hauled to a smelly cavern district for meat, leather and fur processing. Similarly, another sub-cavern in Garel Enkdal is dedicated to crafting, with hundreds of orcs making household goods, leather items and armor.

The grand central city cavern meanwhile, is home to over 20,000 of Garel Enkdal's inhabitants. There is a central road through here that ends at a black iron gate leading to the heavily defended Temple of Gruumsh. Most of the city's armor, blacksmithing, and weapon production is done here while hundreds of poor orcs scrape about in the alleys looking for work or food. The upper class of orc society dwells here as well; courtiers, artisans, musicians, courtesans and the like strut about in their finery and look down on the dregs of the city. Due to city's long period of cultural growth, even shamans and minor wizards are not uncommon here. Given that all the citizens of Garel Enkdal belong to the Bloodied Blade tribe, and worship Gruumsh exclusively, there is generally little rivalry and discord that the constantly patrolling city guard can't put down.

The Great Temple of Gruumsh: This cavern holds the largest building in Garel Enkdal, part of which is a vast temple that can hold thousands. In the building's courtyard is the feared Black Obelisk, an imposing needle of obsidian, 20-feet tall and marked with runes, with a single stone eye perched atop it which is said to beam a reddish light when it spots non-believers. Further inside there is more altars, shrines and the adjoining chambers of the ruling chieftain's family and court. There is also a throne room where the high-priest/chieftain sits upon a high-backed obsidian seat decorated with skulls and skins of monsters. Near this throne is an ominous 14-foot tall statue of Gruumsh, and the profane chill of the mysterious Blackwell. 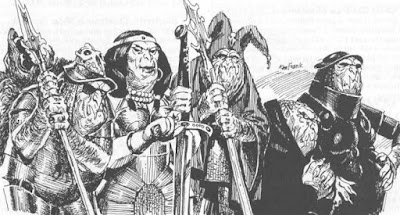 Recent History: Garel Enkdal's patience paid off around 588 CY when Sevvord Redbeard, the ruler of Stonehold snapped out of the magical spell Iuz had placed on him. Enraged by this revelation, Sevvord slew his Iuz's agents, then abandoned most of Tenh, withdrawing the majority of his Fists back north through Thunder Pass to avert a Suel Barbarian incursion into his homeland. Sometime before 591 CY Sevvord and the Fists returned victorious only to find their tiny capital Vlekstaad had been burned to the ground with no survivors, and many captured or missing. Assuming this was the work of the Suel (it was in fact Rovers of the Barrens led by Tang the Horrific), and weathered from several years of war, Stonehold was further incensed to action, but it needed to start rebuilding. As Gruumsh foretold, this moment of weakness would be the perfect opportunity for the Bloodied Blade tribe to finally strike out from its hidden city.

Expansion of Garel Enkdal: In 592 CY a well-armed and trained army of the strongest fighters in Garel Enkdal marched forth from the Griff Mountains into Stonehold. At the vanguard of this horde was an elite force called the Phalanx and shamans of Gruumsh. The main body of the horde was comprised of orc fighters bearing a variety of weapons from swords to pikes. Most notably however, the army of Garel Enkdal included a huge contingent of crossbowmen. Lastly, mixed among this steely horde was a few dozen ogre shock troops eager to fight. Even the battle-hardened Fists of Stonehold could not break this horde, losing every skirmish. In the end Sevvord eventually abandoned half-ruined Vlekstaad by sea while many others retreated into the tundra and forests at the mere sight of the bloody banner of Gruumsh. Giving chase, the horde divided and expanded out north falling short of Bastro, yet to the east Purmill was easily occupied.

With Stonehold's most inhabitable territory under control, the bulk of the horde then turned south to Thunder Pass and met with reinforcements from Garel Enkdal where they descended upon the unaware city of Calbut. After much fierce fighting with the garrisoned Fists there, the northern highlands of Tenh and the valuable pass through the Griff Mountains was now part of Garel Enkdal. Phalanx commanders wisely held back from expanding further south where forces of Iuz, the Pale, and Tenh still battled over the rest of the duchy. The presence of a huge, largely unknown orc army to the north would give these factions pause however, especially after it became evident from slaughtered Iuz emissaries that they were not allies of the Old One. At this point Garel Enkdal stopped its advances to establish its new territories, putting its human subjects to work at sending even more resources back to their underground city. The Bloodied Blade tribe also resumed the reconstruction of Vlekstaad, which this time would be the first port of the new Domain of Garel Enkdal. 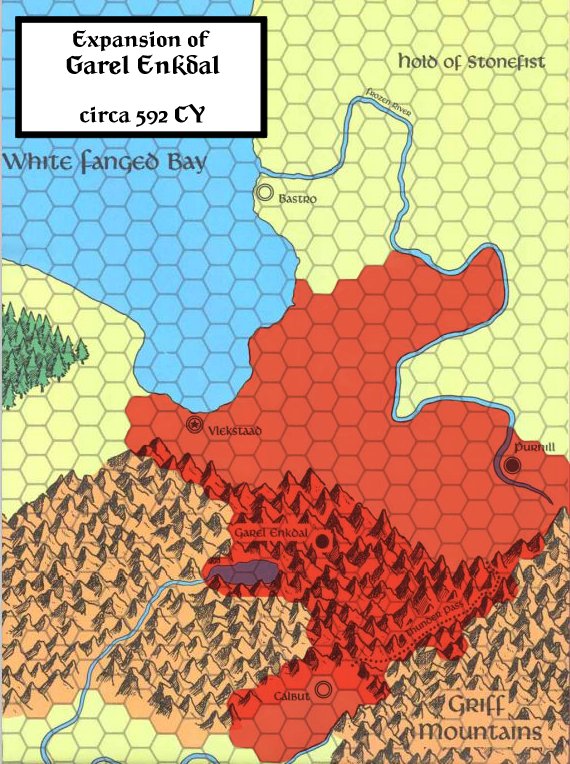 Special thanks to Ken Frank. His illustrations in Five Shall Be One and many other Sargent era modules are a defining feature of Greyhawk published history.

This is very cool. Well done!

Thomas: Thanks man! This one has been burning in my mind a long time.

Scott: Thanks! I am not sure if I have -more- on Garel Enkdal unless I implement it in a game now! Perhaps an outgrowth of this would be to detail lost dwarven clans or other humanoid tribes that fight with or ally with the orc city.