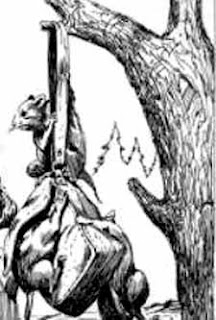 Hail Greyhawkers! This week's humble offering from Ull: Land of a Thousand Villains is one I think DMs and players alike may grow to like. Not all bad guys have to be evil. Some can be sympathetic and useful. Enjoy Didajin.
“The inhabitants of Ull have an uncanny will to live. In fact, many individuals are quite clever at overcoming their obvious disadvantages”.
Didajin (half-elf, male, wizard 2/ rogue 2)
Didajin is a former hedge mage who worked for one of Ull’s decadent Pit Masters. Ten years ago, he lost his sight when he was splashed in the face by a bottle of acid meant for his employer. Since he could no longer do his work blind, the ungrateful Pit Master released him from service and effectively made him a homeless beggar. It is said after Didajin was blinded, he developed other heightened senses to help survive on the streets. Today Didajin still frequents the fighting pits, and markets where he can move through crowds and take in the smells and sounds of Kester. He is known about town as an excellent informant, and is always seen with his pet camprat, a notoriously stealthy creature that picks pockets and steals from market vendors.
Didajin is the lowest of low in Kester society but is unusually left alone by street gangs and enforcers. This is because of a long-held superstition in Ull about the god Ralishaz cursing those who harm a blind man with blindness themselves. Didajin uses this superstition to his advantage, often as a distraction for his camprat to steal something useful. The blind mage typically wears long, tattered robes and ragged headscarf that also conceals his acid-scarred eyes. His robes contain numerous concealed pockets to stash objects and weapons, including the wand focus he used as a hedge mage long ago.
DM’s Campaign Notes: The blind mage quickly adapted to his new lot in life, in large part due to his familiar Kassik the camprat. Using the permanent arcane bond between them, Didajin can still see and hear through Kassik’s senses, even communicating telepathically, while they are within 100 feet of each other. It is this secret that has made the pair an effective pick pocket team in the crowded markets of Kester. Their shared senses also allow Didajin to practice magic. Though he still knows what spells he learned as a student and can study his spell book with the aid of Kassik, Didajin has never been able to advance in power. This ill-fate has left Didajin bitter and jealous when it comes to dealing with the wealthy and other wizards in general.
Didajin is a good low-level foil for adventurers who openly display their wealth in the town of Kester. If the blind beggar is treated well after he is captured in some act of theft, he can be turned into a valuable source of information and access due to his harmless appearance. Camprats resemble prairie dogs and can be found in the 2nd Edition sourcebook, Greyhawk Adventures (AD&D). Alternatively, a DM can use the stats for a standard rat familiar from the Players Handbook.
Posted by Mike Bridges at 6:47 PM

If his bitterness about being unable to advance in level comes to light it's kind of begging for some misguided/sympathetic group of players to decide to drag him along on some adventures to "power level" the poor guy like they were playing an MMORPG. "We'll get you some XP, pal, just stick with us!" How he would feel about that might not quite mesh with the party's idea of gratitude, but adventurers do tend to make a lot of gold if they survive and that would be awfully tempting for a low-level wizard/rogue, especially if he's currently a bit "hot" and could use some time out of the city to cool off.

Be especially funny if they were level 1-3 themselves and just assume he's the fairly raw rogue he seems to be, then he winds up saving (or betraying) them with a timely sleep spell or two.

McGee: That is a great take! He is definitely more fun alive than as a random roleplay encounter to be killed off. Joining the PCs just enhances everything!