All About Manzorian the Archmage 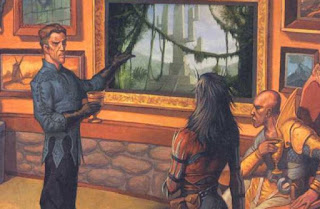 Hail Greyhawkers! To coincide with a Legends & Lore discussion on Tenser and Mordenkainen, I decided to break out the old Paizo Age of Worms AP and see what was going on in that module with Tenser aka Manzorian. I am still flabbergasted that WotC made Erik Mona and company genericize much of Greyhawk's proper names in this series. Greyhawk was the defacto setting in 3.5 D&D and Paizo made highly detailed conversion articles for Forgotten Realms and Eberron. So....yeah. Anyhow, this post is a look into some of the material written about Manzorian, mainly from The Spire of Long Shadows by Jesse Decker in Dungeon #130. I hope you enjoy my commentary. Let's get into it!

Manzorian is an interesting wizard name that definitely has more of a Greyhawk feel than an Ed Greenwood Realms name. Hm, Manzorian's Floating Disk? If I had never heard of the name Tenser, then Manzorian would be suitable. Also, I noticed the root name "Manz" is found in Living Greyhawk Journal #1 for a Count Ignaz Manz who is a 16th level fighter. Coincidence or some deep lore connection? Even though Jesse Decker wrote the module, I can imagine Erik Mona had a hand in renaming this important NPC.

One more thing, Tenser/Manzorian's level in previous products ranges up to 20th. I see in this timeline he got a bit more experienced. More on that later. Let's look at Manzorian's neighboring village, Magepoint.

"A community shaped and defined by the presence of an archmage, the village of Magepoint offers myriad portals to adventures of surprising breadth and difficulty, a result of the many visitors seeking Manzorian's advice...Magepoint has grown considerably in recent years, its growth spurred by a combination of untapped economic potential, readily available land, and the safety that comes from living within the shadow of Manzorian's power."

"After all but one of his clones were destroyed by a treacherous ally several years ago, the archmage's return to Magepoint has ushered in a time of prosperity for the village."

The latter part is a reference to Rary the Traitor killing Tenser and Otiluke before the Great Signing to end the Greyhawk Wars. Manzorian's return means the events of Age of Worms are chronologically meant to take place after the module Return of the Eight. Get this classic module for more info on Magepoint and the Fortress of Unknown Depths.

"Archmage Manzorian is a tremendously powerful character - in fact he's one of the most powerful NPCs the characters are likely to encounter...Handle him with care. You don't want the PCs to come to depend on him too much, but his presence shouldn't be downplayed."

The module goes to great lengths to show Manzorian is too busy to get directly involved, but the PC's quest is too important to ignore. He has agents and allies who can intercede for him if necessary.

"When the PCs first arrive in Magepoint, Manzorian is not present - he's finishing off important business on another plane. Anyone in town can tell the PCs this..."

"Manzorian returns from his travels to Arcadia..."

What was Manzorian doing in the plane Arcadia following his return from death? Was he getting his memory or abilities restored? Clones are just save-points after all, so he probably missed out on a few years. Since Manzorian is one level higher than Tenser was in RotE maybe he was on a divine quest for more power? The only Greyhawk deity I know who resides in Arcadia is Saint Cuthbert. Hmm.

Two of the notable Magepoint citizens are long time agents of the archmage, Cymria of Celadon (13th level elven fighter-mage) from the module Vecna Lives! and clerical ally Agath of Thrunch (19th level) from the module Isle of the Ape.

Manzorian's Fortress of Unknown Depths (and to a lesser extent Magepoint itself) sits atop a mysterious well-spring of arcane power...The origins of this power are known only to a few, but many reap its benefits...even Manzorian himself has not yet mastered its full potential."

The origin of this power is called Oerthblood. For more info on this mystery read Return of the Eight or Dragon #351, Irongate: City of Stairs by Denis Tetreault and Gary Holian. For AoW however, all arcane spells cast within 1000 yards of the Fortress of Unknown Depths can potentially gain effects of metamagic feats Enlarge Spell, Extend Spell or Empower Spell without having to increase the spell's caster level. That's pretty cool and definitely makes Magepoint a place wizards would want to visit.

"Manzorian knows a fair amount about the Age of Worms and Kyuss."

"A former companion of mine, a wizard named Balakarde, made an extensive study of Kyuss and his ways. You might even say he was obsessed with Kyuss...When Balakarde learned Kuluth-Mar was the likely location of Kyuss' divine apotheosis, he could barely restrain himself. I cautioned him against going to investigate the ruins. One does not simply teleport into an unknown region without doing some research."

Oh, like when Mordenkainen sent you to Halmadar the Cruel's tomb in Vecna Lives? Tsk tsk Manzorian. This is the part of the adventure where Manzorian starts dumping lore on the players. It's really good stuff and even if you never intend to play Age of Worms, get it just for the lore. He continues:

"I intended to try to track him down, but unfortunately, other events conspired to take my attention away. I suspect he is dead now. Or worse."

Again, if not for a botched Circle of Eight mission in Vecna Lives, a subsequent cloning, followed by Rary zapping him dead then his next clone being turned into a dretch, and a trip to Arcadia that couldn't wait, he would've totally gone after his friend. Sure, Manzorian, sure. For those who haven't read AoW, Balakarde is actually Bucknard of the Everfull Purse fame. It's silly that besides his famous purse, this is perhaps the first time the NPC has been utilized in some useful lore and he had to be renamed. Ah well, let's see what other lore Manzorian is dispensing...

"The Age of Worms prophecy predicts that several major magical artifacts shall surface in the months before the end...I know of several that have surfaced of late; the Black Blade of Aknar Ratalla, the Tome of the Black Heart, the Obsidian Eye, the Dread Forge, the Bindings of Erivatius, and...a fragment of the Rod of Seven Parts."

What are all these delicious artifacts? I mean, we all know the Rod of Seven Parts, and the Tome of the Blackheart I know from Mordenkainen's Fantastic Adventure, and the Maure Castle Dungeon #112 megadungeon. I had to do some searching for the others, but it looks like the Paizohawk crew was slipping in easter eggs via Manzorian. For instance. Dungeon #119 has a generic high-level adventure, Tomb of Aknar Ratalla by Jack Flynn. Then Dungeon #120 has a module named The Obsidian Eye by Nicholas Logue and Brendan Victorson. The Bindings of Eritavius is from the epic level module Quicksilver Hourglass in Dungeon #123 by Anson Caralya. Erivatius is the Lord of Inertia, a demigod of aging and death and would be just as bad freeing as Kyuss. I couldn't find a reference to the Dread Forge but based on the others I am 100% certain it's from a Dungeon adventure. If anyone recalls the reference let me know in the comments.

"When the PCs are ready to go, Manzorian directs their attention to the numerous paintings on the walls - to one in particular. These paintings are of significant locations of historical import throughout the world, and each is imbued with divination magic to aid in teleportation."

As I mentioned before, there is supplemental articles on how to port Tenser/Manzorian in other game worlds. In Eberron, Age of Worms suggests that Magepoint is a haven for dragons, and that Manzorian is actually a dragon in human form (LG wyrm gold dragon archmage 4). In the Forgotten Realms, it is suggested the Fortress of Unknown Depths is called the Tower of Twilight and is inhabited by a family of wizards. Manzorian here is even MORE powerful and goes by the name Malchor Harpell, a NG Illuskan wizard 20/archmage 5). This seems unnecessary since Tenser was already recast, but he does get a more Realmsy name this way, I guess.

Manzorian meets the PCs again before the climatic end of the adventure in Dungeon #135, Dawn of a New Age by Tito Leati. No spoilers, but ol' Manzorian counsels and finds a way to help the PCs battle Kyuss without getting directly involved of course. Check out that issue for some epic level information. That's all for now. Until next time!

Dread Forge is from Lost Temple of Demogorgon by Sean Reynolds’s, I think.

Yolande: AHA! That does sound like a winner if its around the same time period. Thank you!