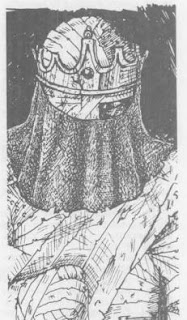 Greeting Greyhawk Heroes! Today I'm bringing back the "Let's Fight" column where I examine the stats for a Greyhawk deity and see if players have a chance against them. It seems timely of course to bring in the one god everyone is talking about, yes folks I mean the Archlich Vecna! Even before Netflix fame, Vecna has appeared in more than a few publications including most recently 5E where some people have already been discussing how to fight him. However, we hipsters in the Greyhawk community feared this villain long before he was cool, so I'm going with the oldest source on him for this fight, the mere manifestation of the demigod Vecna from 1990's Vecna Lives! by Zeb Cook. To make things even more interesting, Vecna has not recovered either his Eye or Hand artifacts for this battle even though the module accounts for this eventuality. He just doesn't need them except on principle. Enough talk...let's FIGHT VECNA!

The heroes have already carved their way through Vecna's entire cult and haven't broken a sweat. Vecna now has to get his hands, er hand dirty now. The Whispered One usually appears as he did when he was a lich. a mummified body in tattered clothes, with a left arm ending in a stump and a veil over his missing eye. However, this lesser demigod manifestation could appear as any humanoid creature really. After the initial shock wears off, (those 5 HD or less must deal with his Fear aura) the heroes win initiative (Vecna would automatically go first vs mortals in his full demigod form). They have exactly one round to slay him or things get ugly (though as a lich or demigod he will be reformed in 1d100 days anyhow). Vecna's defenses?

1. Disclaimer: as a 20th level spellcaster with millennia of experience and a 20 INT & 18 WIS, Vecna can conceivably have any wizard spell precast on himself. He knows all spells of all schools and does not need a spell book (yeah he could carry one in his ribcage just for show). As we all know from years of reading about archmages like  Elminster and Mordenkainen this means Vecna will come into this fight with classic spells like Contingency, Stoneskin, Fly, Fire Shield or Spell Turning already in effect. Pick your poison DMs.

2. Vecna's hit points are decent for 1E/2E era at 116 and he has an AC of 0 (that's AC 20 in today's terms fyi). His manifestation may just be a high-level uber-lich, but he can be destroyed by brute force by a lucky experienced party.

3. As a lich he is of course immune to charm, sleep, enfeeblement, polymorph, cold, electricity, insanity and death spells. No cheap shots against the Maimed Lord. He must also he hit by +1 or better weapons, like anyone would go into this fight with less...

4. Vecna cannot be turned. Clerics, I am shocked. Shocked I say!

5. Magic Resistance 45%. Yeah, I didn't forget about you wizards either (It'd be 70% with all his body parts intact)

Vecna's turn? While it's true his Eye and Hand have quite a few nasty offensive powers that can wreck the PCs, the scary thing is Vecna can cast all these same spells without his artifacts. He has at minimum two 9th level spell slots are available so you can be sure his first move is either Time Stop or Mordenkainen's Disjunction. He is a lich so any spell requiring touch will also cause chill damage and paralysis. There is little chance he would go hand to hand however, especially when all the most damaging wizard spells in existence are at his fingertips. Vecna might even turn the players against each other with Domination. And even if the heroes have a secret plan up their sleeves, Vecna the Master of Secrets will know it so leave your trick plays at home.

So yes, the PCs have a fighting chance against a depowered demigod Vecna. However, when he gets his Eye and Hand or ascends to lesser deity status like in later editions, there is very little chance indeed mortals could take him down without divine intervention. If anyone has battled Vecna in their campaign in any edition, including the newest 5E version on D&D Beyond, I'd love to hear about it in the comments. Before you go here is some bonus links to old Greyhawkery posts relevant to Vecna lore. This one is on the Sword of Kas through the editions, and this post is all about the Eye of Vecna!

Bonus bonus content: Here is a custom-made trivia quiz that I created about Vecna. Enjoy!

Yeah. I think the PCs are toast. Just sayin'.

David: LOL If the players could beat Vecna easily, it'd be a disservice to all lichdom!