Ull: Land of a Thousand Villians - Habahk the Flame Death 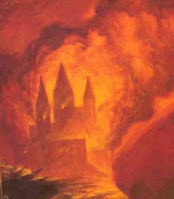 Welcome back Greyhakwers! Today I submit for your campaigns, a new entry in my ongoing Ull: Land of a Thousand Villains column. For more villains like the fiery foe below, go to the Best of Greyhawkery page. Enjoy!

“Ull is a popular destination for the most deranged and desperate criminals in the Baklunish West. The smart ones know they cannot easily blend into Uli society, so they stay out of trouble. The foolish ones end up as thralls. Then there are the rare ones that only seem to get worse”.

The man known as Habahk arrived in Ull a few years ago while working odd jobs in a Tusman caravan heading south to the Dry Steppes. Originally from the city of Dhabiya in Zeif, the gruff Baklunish man is infamously known as the Flame-Death for committing many heinous crimes including murder and arson. Wanted by authorities in Zeif, Habahk has evaded justice so far by hiding in plain sight among Ull’s chaotic society, where he now openly works as an alchemist assistant and sometimes as a cook for the decadent pit-masters of Kester. Habahk’s reputation is beginning to catch up to him, however. His special talents have recently been sought out by vengeful locals wanting to see their sworn rivals ruined by fire. So far, the serial arsonist has been unable to resist the opportunity, even though the Flame-Death knows he will eventually attract the wrong attention.

DM’s Campaign Notes: Habahk makes a good mid-level villain of the week. He is an otherwise unremarkable rogue NPC with a decent bounty on his head, whose capture could lead players on to even bigger story implications. The Flame-Death has indeed earned the enmity of the Mouqollad Consortium, the Royal Navy and many in the Qudah (Al’Akbar) not only due to his many acts of arson against these groups, but also since he is part of an outlaw Cult of Imix (evil-elemental prince of fire) once based in Dhabiya. Known for the creation and employ of many deadly fire-based magic items (such as Brazier Commanding Fire Elementals, Neckless of Missiles and Wand of Fire), the surviving members of the cult like Habahk, are on the run from Baklunish bounty hunters and heroic agents of Alhamazad the Wise. Sooner or later, these other potentially more dangerous cultists will gather in Ull to rejoin with the Flame-Death. If Habahk is killed or captured, they will certainly exact vengeance on any who have gone after one of their own.