Happy New Years Greyhawkers! Let's get back to my continuing military history of the Flanaess. If you haven't seen the previous entries in the Wars of Greyhawk, go to the Best of Greyhawkery page on this blog. This entry pits the forces of Iuz versus the tenacious Wolf Nomads. Enjoy!

Result:
The Wegwuir Horde routed the forces of Iuz the Evil. 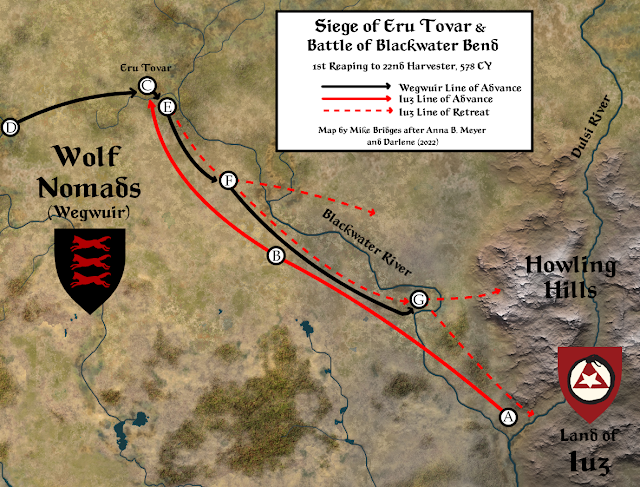 Ever since the return and increasing rise in power of the demigod, luz, the Wegwuir avoided their ancestral lands east of the Blackwater, instead focusing their annual raids upon the neighboring Chakyik tribes (Tiger Nomads) to the west and south into rugged Perrenland. In the spring of 578 CY, Iuz capitalized on the predictable absence of the nomad hordes and directed the Boneheart to form an army to conquer the town of Eru-Tovar, the only permanent settlement of the Wolf Nomads. Iuz hoped this bold move would crush the Wegwuirs’ morale and force them into his subservience.
Battle
A):   The Northern Host of Iuz was placed under the joint-command of Lord Choldraf, a high priest of Iuz (Cleric 14) and the lesser Boneheart mage, Mellard-Plict (MU 12). Lord Choldraf for his part raised human mercenaries for the campaign; 2,000 heavy cavalry, 1,000 light horse, plus 2,000 heavy foot and 2,000 crossbowmen. In addition, he rallied 4,000 hobgoblin shock troops to compliment his well-armed soldiers. Mellard-Plict on the other hand, drew his forces from the worst corners of Iuz’s land, raising about 6,000 orcs, 3,000 gnolls, 3,000 goblin and xvart scouts, as well as a huge mixed horde of ogres, ogrillons, norkers, and bugbears. Swelling to over 25,000 in number, the Northern Host gathered in the arm of the Howling Hills between the Dulsi and Blackwater Rivers, and at the start of summer 578 CY they force marched westward toward Eru-Tovar.
B):   Unsurprisingly, the leaders of the Northern Host did not work well together, and both were unhappy with sharing command. The pair quarreled incessantly during the march through Wegwuir territory; Lord Choldraf was incensed that the evil wizard could not firmly control his diverse rabble of humanoids, and in turn Mellard-Plict insulted the Iuzian priest’s personal powers and disputed the quality of his well-armed, but relatively weak troops.
C):   The Host arrived at Eru-Tovar the following month and a siege was laid on the Wegwuir stronghold according to Iuz’s design. The bitter feud between commanders continued however as each ran a separate campaign in an effort to claim the glory of taking Eru-Tovar. The chaos on display before Eru-Tovar allowed its warriors, outnumbered by over eight to one, to withstand ten weeks of siege. Initially, the hardy Wegwuir ignored calls for surrender, then repelled any attack sent against their town with skill and discipline, while harassing the dual sieges with their own destructive sorties. The casualties suffered by the Host was significant, compounded by the tendency of the rival besiegers to slay the other’s wounded. This general disarray also allowed Eru-Tovar to send fast riders, easily eluding the siege to warn the Tarkhan’s horde and rally aid among the Wegwuir tribes.
D):   Meanwhile to the west, the annual feud between Chakyik and Wegwuir hordes abruptly ended with a treaty. As Istus would have it, the Tiger Nomads turned their focus to the Caliphate of Ekbir just as the dire news from Eru-Tovar reached the Tarkhan. Incensed by the craven attack on the Wegwuirs’ only permanent town, Bargru turned his force of 20,000 lancers and mounted archers to ride back in haste. The Tarkhan’s horde arrived at Eru-Tovar by late summer, just in time to raise the siege as it was already faltering.
E):   The Northern Host of Iuz had been alerted of the Tarkhan’s return, so the call was made to retreat eastward by their original trail along the Black Water, in order to reach the Howling Hills where they hoped Iuzian reinforcements would be amassing. Lord Choldraf was furious as his well-trained units were forced, at a considerable loss, to provide a screen for the main Host’s withdrawal.
F):   Yet again, Lord Choldraf blamed the undisciplined humanoid troops under the cowardly Mellard-Plict for their misfortune, as a great number of the wizard’s troops began to desert, many splitting off into smaller tribal bands to fend for themselves in the wild.
Many of these deserting bands were further scattered across the plains and highlands as reinforcements for the Wegwuir arrived from the northeast. Lekkol Noyon, seventh son of Bargru (half Flan), hastily returned from the Barren Plains with 800 veteran horsemen at his back, fresh off a grueling campaign allied with the Rovers of the Barrens against the despised Horned Society. Lekkol’s riders were gladly added to the Tarkhan’s horde, further increasing the nomad’s morale.
G):   Taking his time, the Tarkhan closely pursued the remaining Host over several days, methodically steering them in a series of hit and run skirmishes, off their path and toward the wide bend of the dark and muddy Blackwater. Now cornered and outnumbered by a more mobile army, the remaining Host of Iuz had no choice but to stand and fight a pitched battle which occurred on the 22nd day in the Dozenmonth of the Squirrel (Harvester). It is said in the outset of this battle, the priest Lord Choldraf begged for intervention by Iuz the Evil, but his prayers fell on deaf ears. The vile mage Mellard-Plict was likewise ineffective during the battle, using his spells instead to escape from the wrath of the Tarkhan. The brutally efficient Wegwuir archers and lancers easily routed the desperate invading Host, who soon abandoned their arms and fled over the brackish tributary. The Wegwuir took no prisoners, slaying nearly 8000 enemy soldiers including many drowned while crossing the Blackwater. The Wolf Nomad victory was decisive, losing about 2,000 and twice that many wounded. Only a few thousand of luz’s once formidable army survived that day and finally made it back to the Howling Hills.

Aftermath
Lord Choldraf returned to Dorakaa in disgrace and never again commanded Iuz’s armies; worse yet the priest was demoted in Iuz’s unholy hierarchy. Choldraf continued to serve in the Old One’s court, seeking atonement for his infamous defeat. Unlike his rival, Mellard-Plict did not return to the Land of Iuz to answer for his failure at Eru-Tovar, instead abandoning his position in the Lesser Boneheart. Rumor has it the mage not only feared the judgment of Iuz, but also the vindictive Lord Choldraf. It is said, the wizard fled to the Vast Swamp far to the south, where he now serves another demigod, Wastri, the Hopping Prophet.
Following the Battle of Blackwater Bend, Bargru returned to Eru-Tovar in triumph, but rather than celebrate the Tarkhan immediately reinforced the garrison and began repairing the badly damaged defenses of his capital that had barely held out during the weeks-long siege. Once Eru-Tovar was secured, the Tarkhan journeyed to the border of Lake Quag near the Sepia Hills, territory of the Guchek tribe, also known as the Wild Dog Nomads. Bargru met with their leader, Jicta Khan, to seek answers for why he alone among the Wegwuir had not joined the Tarkhan’s horde that spring, nor offered succor to Eru-Tovar against Iuz’s siege. The angry Tarkhan and his retinue was instead welcomed with a deadly ambush by Jicta Khan. Bargru’s personal guards were slaughtered defending the ever-wary Bargru, who barely managed to escape the trap using his ancestral powers of illusion.
It was later discovered Perrenland secretly made an alliance with the Guchek, backing the rebellious tribe in their independence from the Wegwuir, as a hedge against future raids by the Wolf Nomads. The Tarkhan returned to Eru-Tovar more incensed than before, though by spring of 579 CY he still had not taken action against the traitorous Jicta Khan.

Heroic Hooks
DMs who wish to feature the Battle of Blackwater Bend in their own campaign should note this conflict takes place about two years after the starting timeline of the World of Greyhawk boxed set. This battle is set during a time when the demigod Iuz the Evil, is rising in power, and is expanding his domain in all directions. The Battle of Blackwater Bend could make a good historical flashback, or a climatic event for a Bitter North campaign. The following hooks are suggested for DMs who want to have player characters participate in the Siege of Eru-Tovar and the Battle of Blackwater Bend without necessarily reenacting all the events.
Sources:
Gary Gygax. World of Greyhawk Fantasy Game Setting (1983).
Gary Holian; Erik Mona, Sean K. Reynolds, Frederick Weining. Living Greyhawk Gazetteer.
Gary Gygax. Greyhawk’s World: Events of the North Central Flanaess. Dragon Magazine #56.
Carl Sargent. Iuz the Evil.
Posted by Mike Bridges at 6:22 PM

Wow! Great resource! I really like the flashback idea.

Joe: Thanks, I appreciate it! I didn't want it to just be a dry historical work, so I gave some game applications.

Great work - it makes it far easier to parse how the battle happened - reminds me (in a good way) of the Kings and General treatment of battles and campaigns, real and fantastical.

Woesinger: That is high praise coming from you! Thank you for commenting.