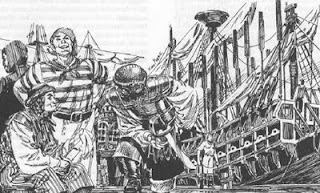 Last session was a shortened one unfortunately, and one player was sick, but there was still some good plotlines laid down for the future of the Hold of the Sea Princes campaign. Narratively I think I can make the session seem like more than it was. Last time, the crew of the Bird of Prey came upon the friendly port of Fort Blackwell. Here are our intrepid characters:
Victor Emmitt Hammond (fighter, courtin' in the rain)
Araxo Tydan (rogue, schemin' in the rain)
Cuahtehmoc aka "Cuahto" (ranger, trackin' in the rain)
Fort Blackwell, an outpost of the Sea Princes is situated on the tip of the Amedio Jungle's cape, known locally as the Hook. Its harbor is protected by a sea wall, and ships wishing to enter are subjected to searches. Usually it is said more contraband leaves this port than enters it. Needing to only resupply after a harsh trip from Narisban, Captain Rennaud gave most of the men shore leave here knowing there was nowhere else for them to go but into the jungle. Notably, two left off this list was pressed ganged kidnappers, Tater and Gunt (Gunther, whose teeth were knocked out by Vic). Scowling on deck, they were approached by their captor-officer Araxo Tydan. Things were somewhat smoothed over as the rogue started to forge some allies among the crew. This "good-will" was also extended to Araxo's bunkmate, the ship's surgeon Caine the Despised, a half-elf that no one liked for his foul bed-side manner.
On shore, Victor Hammond escorted Anna Taskerhill on a walk of the small town of Blackwell (population 1100) to see its taverns, inns, provision shops, shrines and so forth. The temperature was still warm and the steady rains still came in intervals as it had for the last week. Seeking shelter from the downpour at one of the inns, the pair weren't seen again until dawn...
Meanwhile, Araxo and Cuahto walked the town as well, but they sought to make some shady contacts in the port for a side smuggling venture. Their luck proved to be bad as everyone they talked to seemed to be carrying about their business. Eventually at the Rusty Nail tavern, the pair met overdressed, loud mouthed owner Al Swearengen (no relation to the guy from Deadwood) who knew of Count Tydan but not so much the Bird of Prey. This Holder took the time to chat with smooth talking Araxo about possibly moving some (illicit) product through his shop, yet in the end the loud manager insisted he needed to see a sample first (of which they had none yet). So, the two left with at least an opportunity to sell some contraband the next time they're in Fort Blackwell. Assuming they can get by the harbor-watch.
Setting off from Fort Blackwell (Drowsy Mr. Hammond was given a stern look from Quartermaster Rotario), the Bird of Prey with its passenger, caught a good wind and stayed close to the Amedio shore on its port side as it entered Jeklea Bay on route to Sasserine. One hundred miles out, look outs noticed a strange sight on the jungle coast: smoke coming from a narrow burned-out inlet. Feeling confident in home waters, the Blackguard decided to investigate the Burn. Leftenant Tydan was given the command of an away-twan of his choosing. Victor Hammond and Cuahto of course were picked along with much reviled archer Bullseye and quiet, chip-on-the-shoulder warrior "Scar" Medorga, the only female member of the crew. Scar jumped at a chance for some action while always-serious Bullseye was met by jibes and taunts from both the PCs and the NPC crew for his ineffectual archery skills so far.
A rowboat was taken ashore where they soon found the trees blackened and smoldering as if a lava flow had cut a swath through the jungle. Not being anywhere near volcanoes, they dismissed this theory. Off to one side of the bank they spotted a dry side ditch piled with dozens of charred bodies. Araxo, Cuahto and Bullseye got out to check them out, while Vic and Scar looked on to the end of the Burn. After some bickering between the rangers it was determined the bodies were common baboons. Araxo wandered off into the burn pile seeing one baboon that was not fully burnt, yet missing its legs, and clutching something tight in its dead hand.
Stooping down to get what it held, Araxo found to his chagrin, that the baboon was still alive as it opened its eyes, screamed hysterically and bit him on the hand. Cuahto jumped to his aid and split the creature's skull. A late arrow from Bullseye zipped by an angered Cuahto to hit the dead baboon. In the distraction Araxo found the simian held a red stone figurine. He didn't have time to study it however, for the pile of crispy baboons erupted upwards and from the ground came the giant bombardier beetles...
(to be continued)
Game notes: Kudos go out to Dan (Victor Hammond) who printed my south seas map in color, on a single sheet of heavy paper that looks to be close to 24"x24". He said it could be done bigger if I wanted but my text resolution didn't scale up well enough. Mapping lesson learned there, but in this this case I'm more than happy with the size. The map is just as gorgeous in print as I imagined it would be. Too bad I can't sell them!
Posted by Mike Bridges at 9:06 AM

Sounds like the game's going strong, glad to "hear" that!

I thought it was funny your crews selling contraband but don't have any actual contraband. Gotta keep the staff away from the stash.