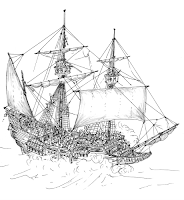 This is the continuing series on my Hold of the Sea Princes campaign. Last time, the crew of the Bird of Prey was set to leave the island port of Narisban with a new passenger, one Anna Taskerhill. She is a runaway bride from Sasserine with a reward out for her return. Three years later, she is homesick and with the help of family friend Cpt. Rennaud "the Blackguard", she hopes to return there and face the music. But in the meantime there are still scalliwags out there who would try to cash in on her ransom. Having dealt with them, their course was set and the Bird of Prey slipped out early the next morning. Here are our protagonists:


It was to be a hot, listless day and the Bird of Prey caught an early launch out of port, heading north west back toward "the hook" of Amedio Jungle. The second day into the voyage, South Olman Isle had just disappeared over the horizon when Mr. Hammond belatedly spotted another vessel creeping behind theirs from the same port. After much deliberation it was found to be flying the flag of the Crimson Fleet pirates (red flag with a black skull). The history between the Blackguard and the Crimson Fleet was not good to begin with, and added to the fact they had a valuable passenger, they knew this ship was not up to any good. Surprsingly it was soon determined (using spyglass) that the ship was not the pirate ship Hideous which the PCs had met in port, but a sister ship from the fleet called the Laughing Rake.

The crew immediately debated whether to confront the pirates or evade them. Hammond and the quartermaster "Skullbreaker" Oratero made the case to the captain to face them, while first mate Araxo and bosun "Old Man" Cassen cautioned against that to protect their passenger. Captain Rennaud chose to evade, so the entire crew put their backs into it and in a lightning exercise of skill managed to put enough distance on the Laughing Rake as to lose them by nightfall. Then the weather changed.


Heavy winds rolled in from the northeast and drove the Bird of Prey slightly off course for a day toward the Amedio coast. By the second day the winds continued to pummel the ship but the crew managed to get their bearing back under control before any land was sighted. What ever came of the Laughing Rake in the two-day windstorm is unknown. Structurally the caravel sustained minor beam and rigging damage, keeping "Nasty" Nestor the carpenter and his lackeys busy for a bit. Then the fog rolled in.


The winds were light but visibility was nil the next day, so after two hard days of work everyone deservedly rested up. The ship's elven musician, "Piper" Kellin regaled the crew with another sailor's story, "The Ardent." This tale is about an Aerdian exploration convoy headed for the south seas, and one ship full of pious Pholtans, the Ardent got lost from the others in a fog cloud. The hair raising things that happened after the fog lifted had set the crew on edge, but their moods were lifted by the heckling comments of Brother Pickles. The weather changed.


The fog lifted and the light winds persisted but with a cooler temperature behind it. In their free time, Vic spoke at length with Anna (under the eye of Skullbreaker) who was tired of being cooped up in the captain's quarters for days. He also began to teach her some swordplay on deck, much to the diversion of all. Anna also had a chance to speak with Cuahto in the Olman tongue. Her skill in his language was decent though his dialect showed he was from parts far from the Olman Isles where she learned through trading with the natives. The Bird of Prey continued unabated north by northwest for four more days then, the weather changed.


Warmer temperatures with steady rain showers came upon their vessel as they sailed within 10-20 miles of the Amedio coast. During one misty day there was much excitement on the deck as Mr. Hammond (belatedly) spotted a small horse-sized green dragon off their port, flying nearby to check them out. Leftenant Tydan, sensing a rare opportunity, called up the much-maligned resident archer "Bullseye" Arborius to try and operate one of the ballistae in order to wing the creature and possibly collect it. Araxo Tydan likely saw this as a safe chance at some glory for himself so he took the trigger of the only other ballistae. Both failed miserably to hit the dragon, which turned and flew away uninterested. Bullseye earned some more scorn from the crew as his weapon in fact backfired and sent him on his rump. With that bit of fun ended the crew was barked back to work and the Bird of Prey would soon see evidence of civilization along the cliffs of the Hook, a single trebuchet aimed out to sea. That is when they knew their next stop, Fort Blackwell was only a day away.


Campaign notes: The PCs are 2nd level now. In case anyone missed it last post, I finished my mapping masterpiece of the south seas. My long term goal for the map is to give the players a wealth of mysterious, unexplored places to sail as well as gobs of well-known ports to take their wares to. All the weather related changes were randomly rolled using charts I culled from Stormwrack. If I ever get around it, I'll do full write ups of Piper Kellin's stories (The Ardent and the Platinum Hand so far).

Nice story so far the PCs don't know this yet but they shall rue the day they meet that dragon.

It went to tell it's mother of the tasty snacks aboard this ship.

Yes I love random encounters that can someday be hooks for the future. ;)

Sounds like good times on the high seas! You guys must be having fun.

Keep it coming, Mort. I'm loving it and wishing I was there.