Today I'm sharing and discussing some hidden gems of Greyhawk lore. Back in the heyday of 2nd Edition AD&D, TSR put out sets of trading cards based on the many settings supported back then. The cards were probably ahead of their time since you rarely hear about them anymore, much less see their info used in general D&D setting canon. I think there is a lot of good stuff here to be mined for any avid Greyhawk fan. Here's a few random bits to grab your interest:

First up is Jallarzi Sallavarian. Nothing new here except this is a sweet illustration of her that I hadn't seen till recently. She kind of has that big 80's hair-smugness about her. Well, she is nobility after all. Now compared to her illustration in From the Ashes, I think I prefer the sleek, curly-coifed Jallarzi with the arm length gloves. Tastes may vary I guess.

For completeness, here is the back of Jallarzi's card. This card as you can see was part of a set showing all the Circle of Eight as of the timeline events in Rary the Traitor. 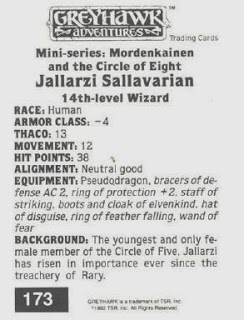 Next up is a curious Magic Medallion that is evidently from the Greyhawk setting. The back of the card is much more intriguing... 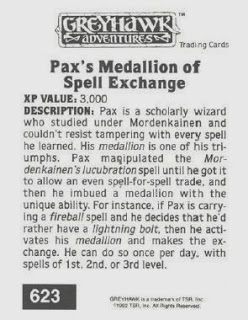 Who is this wizard named Pax? My guess is he was erased from existence for being audaciously arrogant enough to mess with the perfection of Mordenkainen's magic. Either that or he was kicked to the curb when Mordy found a comelier student in Rautheene from the Wizards Three articles.

Lastly there is Willara the gnome. The trading card sets are replete with unique setting specific NPCs. This one is kinda neat though typical for NPC gnomes... 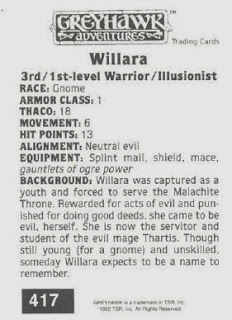 A Neutral Evil gnome? Shock! Willara also sports Gauntlets of Ogre Power! Not bad. Apparently she got them from this devious Thartis fellow who works for Ivid the Undying (who sits the Malachite Throne). Overall a fun entry; my favorite part being the end, where Willara hopes to be a name to remember. Fail.
That's it for now. Plenty more cards to muse over another time.

I remember having some of these. Thanks for making me feel old Mort.