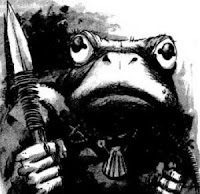 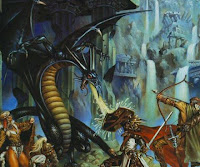 I hope this article has shown there is more to Greyhawk's swamps than just the Tomb of Horrors. Happy hunting heroes!
Posted by Mike Bridges at 8:07 PM

That was awesome. I don't know why I didn't vote, but I would have definitely voted for the Trollfens. Geographic size isn't everything! And even finding the Tomb of Horrors is 1 thing; you could easily NOT go in there...

Loved the art selections, too. My favorite might be that Jeff Dee classic, chasing the troll. How I wish Paizo had kept the original troll body shape in Pathfinder...sigh.

The new barbarian poll allows you to choose more than one answer. That's why ;)