Greyhawk Foils: The Lords of Westkeep

Howdy Greyhawkers! Lately, I've been digging through old notebooks and computer files looking for something from one of my home campaigns that I haven't already showed on the blog (or that is coherent enough to show off). Amazingly I think I found something good that I forgot to share, namely the adventuring company who calls themselves "The Lords of Westkeep". My Hold of the Sea Princes campaign is fairly well documented on Greyhawkery and this NPC group was created to be a foil for my players in the Mines of Hokar story line. The Lords of Westkeep are not all bad, in fact, some are down right likeable which made their presence in the Mines aggravating because they were the PC's main rival in acquiring the object of the Mines of Hokar quest, the lost golden Toli Captains. These rare minted coins, of which there are 33 scattered throughout the cavern-dungeon complex, are desired by the Marquis of Hokar in his goal to impress the enigmatic pirate group known as the Fivefold Council. Needless to say, whoever gets the most coins to the Marquis, gets the most reward.

The Lords of Westkeep is a group of five “dungeoneers” who mainly search the monster riddled mines of Hokar in the Hold of the Sea Princes. Where they’ve been and how they came together is more interesting than their day job. The Lords, as they call themselves, consist of three main members and two later additions.

“Breaker” Lorgan (CN human rogue 4) Breaker is a professional thief originally hailing from the swamp frontier town of formerly ran with a gang of bandits once led by the infamous Black Gus. Gus and Lorgan were good friends since childhood (they wear matching silver skull rings) but eventually as they got older, Lorgan wanted more fame and fortune so he joined a man he met in Westkeep named Malvin Greyblade to start an adventuring group in the town of Hokar. Breaker Lorgan sports distinctive sideburns, wears custom leather armor with many pockets for tools and weapons and is continually seen smoking a pipe.

Malvin “Mal” Greyblade (CN, half-elf fighter 4) is a swordsman who studied his art under tutors in great cities such as Port Toli and Gradsul. He is a patron of Kelanen, the hero-god of swordsmen and mercenaries. Greyblade is somewhat popular in the Hold not only because of his adventures, but also from tales of his romantic prowess. Mal first met Breaker Lorgan in the town of Westkeep, their eventual base of operations, and turned him to a more lucrative pursuit than burglary and banditry. Their party was soon joined by a mutual acquaintance, the gambler Brother Caylen. Greyblade is the most comely of the Lords of Westkeep. He carries a rapier and dagger, befitting his fighting style, and always wears the best fashions of the Sea Princes even when spelunking the depths of the Mines of Hokar.

Brother Caylen (CN, human cleric 4) is a worshipper of the god of gamblers, Norebo. Caylen hails from the great metropolis of Greyhawk where he has ran up some debts and made a few enemies. Now residing in the Hold, he most recently joined two friends to form the Lords of Westkeep in order to ply a monster haunted dungeon in search of gold for the local Marquis. Never without dice or cards, Brother Caylen is shifty eyed and wears chainmail under a black hooded robe. He carries a mace under this robe for when games go bad at the table.

Amagaro the Outstanding (NG, human wizard 4) is a later addition to the Lords of Westkeep. Amagaro has no homeland; he once traveled with a caravan of performers where he was a “strongman” (yes an 18 STR wizard). Bored with simple feats of strength, Amagaro studied the art of magic from the elder circus mage in his free time. As fate had it, the caravan disbanded and left Amagaro stranded in Hokar looking for work. Malvin Greyblade and Breaker Lorgan saw his last performance, and they were so impressed with the strength and good nature of this wizard, they had to have him in their party. Amagaro is a genial fellow who wears commoner robes, often sleeveless, and carries a staff that once belonged to his mentor. Amagaro is tall, bald and has bushy eyebrows. 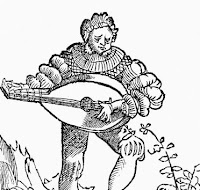 Tommo the Minstrel (CG, halfling bard 4) is from the nearby County of Ulek. Enamored by human and elven culture, the little minstrel travelled west to write and play ballads about heroic figures he would meet. Malvin Greyblade as chance would have it, is his current interest and as such Tommo is only a honorary member of the Lords of Westkeep. Tommo never goes into the Mines of Hokar, but instead waits at the nearest tavern to hear his friends account so he can retell their exploits. Tommo and Amagaro share a close friendship, both being entertainers. Tommo is always cheerful and optimistic. He appears more like a foppish court room fool, wearing a floppy hat, belled shoes and playing a small lute.