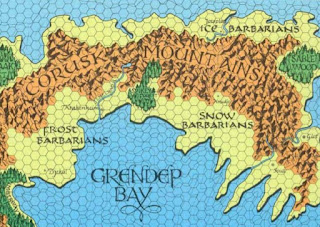 Howdy Greyhawkers! Taking a break from my Ring of Five Questions column this post, I have to first thank everyone for their participation, it has been a blast, and yes there is still time to email me your answers: mortellan@gmail.com

Now onto my new map. I recently started a 5E Ice Barbarian campaign for my local group, to fill in-between games. We are already on hiatus unfortunately at 4th level, but the setting was fun and very local themed. I hope to continue it again someday because if I make a map for a game that means I'm having fun. The map below is actually based on a set of maps I did back in 2E for my Thillonria campaign. This new map is a zoomed in (1  large hex = 30 miles) section of Cruski which I have called Atliland. This area is by the fjord in northern Cruski between the "Corusk" and "Mountain" labels on the Darlene map and north of the mountain lake at the narrow point between Frost and Snow Barbarians.

The players are village heroes and did a series of minor, but harrowing adventures on behalf of their wilderness home. I apologize for the rough look of this map because it got rained on one day and curled before I decided to scan it at home. It's pen and marker, hand-drawn on a rather wide piece of hex paper by Black Blade Publishing so I had to scan it in two pieces. I then added some coloration to give it that worn map look and to disguise the wet spots. This was a map in progress mind you. I was adding stuff to it as each session was played. A remote area of the Flanaess like this is perfect for sandboxy type DM development. Click on the map and check it out. I'll add some notes on the locations below. Enjoy! 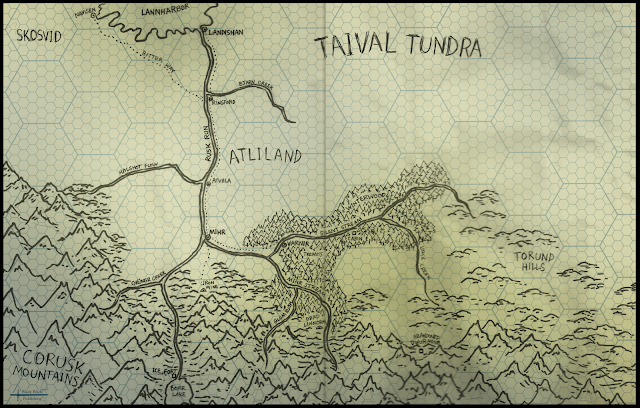 Taival Tundra: This is the name given to the expanse of land across the top of Thillonria. Not sure if it includes Stonefist or not? I take it most Cruskii live on the east coast of Thillonria, whereas the hardiest of the Ice Barbarians, like the Atli, live along the Icy Sea coast. Here on the featureless plain, I imagine huge herds of elk, polar bears, wolves and maybe even a remorhaz or two!
Atliland: The Jarldom of Atli is everything east of the Rusk Run. West of the river is Jarldom of Skosvid.
Lannharbor/ Lannshan: This is the waterway and capital for Atliland. I have not done much with Lannshan, except this is where major purchases must be made. Long ships of Atliland gather here and sail north to the Icy Sea when the fjord is open.
Ringford and Atvala: Two villages upstream from Lannshan. No notes on them yet except to have potential local rivals for the PCs.
Mihr: This is the village where the PCs hail from. It is defended by earthen-work ramparts. Up the Silent Stream from here is the neighboring woodsman village of Varnir which is allied closely to them.
Winterwood: This is a smaller forest I created in Atliland. Alot goes on here as it is very wild and unexplored. So far there have been gibberlings, treants, ettins, pesky fey creatures and the lair of a dead linnorm. There is also a trapper's cabin in the woods that may or may not be haunted.
Torund Hills: This is an area I expanded off the Corusks, but have not fully developed yet. Good chance that its inhabited by giant-kin. However, at the edge of this foothill region the players discovered an abandoned dwarven mine, which was taken over by orc scouts that have began to filter through the mountains eastward. I imagine these baddies are related to the orc city of Garel Enkdal from Five Shall Be One, set far to the west near Stonefist.
Borr Lake and Ice Fort: I have not developed these areas yet. They are seeds for future stuff. I think it may tie into our homebrew power group, the Night Shadows though.
That's it! Comments are appreciated. If anyone else has ran a campaign in Cruski let me know. I'd love to add to the lore of this regional map.

Great map! Where exactly is it along the Icy Sea Coast? Or do we have to wait for next Anna's update to find out?
Thanks for sharing. Are you going to give us regular updates on the campaign?

Its south of that long fjord about halfway along the Icy Sea coast. Updates may not be coming for a long time since I'm on hiatus while we switch DMs. However, much like the Sea Princes or Ull, I tend to keep developing even when I'm not active.