Ring of Five Questions: Round 13 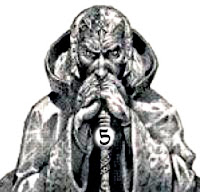 Well met Greyhawk patrons! If you've been following this blog for the last month or so, you'll know this is the thirteenth round of my ongoing Return of the Ring of Five Questions column! If you happened upon this column for the first time, well put simply this is a community participation feature of Greyhawkery. Search back and read the previous installments (Round 1-12) then email me at mortellan@gmail.com with your own five responses. Remember, you can be as short or wordy as you like in these responses. Disclaimer: I will keep taking entries until the end of 2020 so hurry up and respond before Needfest is almost here!
Every so often someone finds a loop hole in my plans where I didn't explain my rules well enough. This time a daring reader of the blog has (through no fault of his own I'm sure) responded to the questions in one of my original RoFQ interviews instead of the stock five Greyhawk questions I posed at the start of the column. This is significant because I used to customize a couple of the questions to each person I interviewed especially when they were published authors. I will indulge this gentleman's entry and take it up a notch by comparing his answers to the original custom interview. But from here on, the loop hole is closed. Only respond to the questions in rounds 1-12. Without further ado, let's enter the Ring! I present the ineffable Christopher Lerch versus the legendary Creighton Broadhurst of Living Greyhawk fame and freelancer at Raging Swan Press. Good luck Christopher...enjoy!
Q1. As a long time Greyhawk fan, you should know the Darlene map by heart. What is your realm of choice in the World of Greyhawk?
Creighton: I have a lot of good memories of Onnwal because of my time in Living Greyhawk - I made some very good friends in LG and had some great games! I'm also becoming very partial to the Great Kingdom - and its successor states; most of my recent campaigns have been set there.
Christopher: Verbobonc because I've had so many adventures there (starting with Hommlet), both as a player and as a DM.
Creighton was instrumental in developing Onnwal during the 3.x era as well as being notable for his adventures and lore further developing Rary the Traitor and the Brightlands. That he takes interest in the fractured Great Kingdom is no surprise here. I imagine he would love for the Iron League to exact some payback on Aerdy! Christopher holds his own with an old school answer in Verbobonc. While I'm not sure if he was involved in Living Greyhawk (Verbobonc was the region I lived in and I didn't), I do know Hommlet, the Moathouse and the Temple of Elemental Evil is where alot of long time fans cut their D&D teeth. Good show, moving along...
Q2. If you could be one Greyhawk deity which one would it be?

Creighton: Boccob. I almost always play wizards, sorcerers and the like so it would be cool to play at being the best wizard ever!
Christopher: Definitely St. Cuthbert!  He, to me, represents not only Greyhawk, but 1e AD&D as well going all the way back to the DMGs Artifacts & Relics.
Christopher shows his gallant side as he identifies as the most proactive good god in the game, St. Cuthbert! His love of Hommlet, AD&D and the original DMG emanates from him! Or maybe it's that Mace he is holding? Creighton counters with the enigmatic Boccob. D&D has magic, so who has the most? No, not Mordenkainen! No, not Elminster! The Uncaring One of course! A wise choice, sir. Now knowing this, I wonder if Creighton was pro-Rary the Traitor? Hmm...
Q3. You published alot about Rary for Living Greyhawk. What NPC/organization would have been your second choice for a major storyline?

Creighton:  Rary was actually my second choice! Originally, when we were casting about for a major core plotline I got very interested in exploring the ruins of Medegia. It's an area ripe for development and we could have explored some very apocalyptic themes. I think adventures in the ruins of Pontylver would have been particularly cool. I even had an article basically ready to go for the Living Greyhawk Journal (which later saw the light of day in the Oerth Journal). Eventually, however we decided that the plot would have been too regional in focus - in that Medegia isn't exactly central in the Flanaess and its plots would have focused a lot around the Splintered Sun meta-region.
Christopher: I would have liked to have seen more Mordenkainen-centered stories.  Maybe something about his fortress in the Yatils?
So far the first two questions have been standard for the Ring. This one is slightly tailored to Br. Broadhurst because of his publishing credit in Greyhawk. It is very interesting to see his Rary writings was utilized by LG because of its central location. This explains alot, why the living campaign didn't venture too far into the edges. For those who want to track down his Oerth Journal stuff, go to GreyhawkOnline. He has alot of contributions, including his mentioned Medegia idea featured in issue #25. Mr. Lerch has a mountain to climb now as I don't know if he has published any Greyhawk material of his own. Few in the Ring can compare to CB. However! He does pose a great idea for a story line that people would absolutely EAT UP. Anything Mordenkainen is a must have, and I would definitely go for an adventure set in or around his Obsidian Citadel in the Yatils. So much potential. So many dark secrets there...
Q4. Is there any Greyhawk module that you wish you had never ran?

Creighton: No, but there are lots I wish I could run. I really, really want to run GDQ1-7. I've played it twice, but never DMed it. Sadly, my current group has a player who has just run it as a DM and thus knows it rather well. I'll have to bide my time. I'd also like to make my players forget the Temple of Elemental Evil and run that again - it's one of my all-time favourite modules, but sadly we all know it rather well.
Christopher: No! I love those old modules.  I need to expand out of the 1e (I have run *some* 2e), maybe check out the 3e Living campaign.
Well, well, looks like Chris has NEVER ran a module he didn't like. I would expect nothing less from the god of zeal. Well, there is a significant segment of 1E/2E that I wish I could undo or even unpublish. The Sargent and Moore eras are not bad, but I'll assume you used the best of what came out. As for 3E era stuff, I'm sure anything by Broadhurst is top notch. I'd stick to the Living Greyhawk Gazetteer and select issues of the Living Greyhawk Journal however. Creighton meanwhile, agrees with Chris, but goes in the opposite direction wanting to relive Greyhawk's AD&D classics. If he was Boccob he could make his players forget what they previously ran. Good times...
Q5: There's a vacancy in the Circle of Eight. Which NPC wizard would you pick to fill the spot?

Creighton: I guess that depends on what year it is! Assuming it's after Return of the Eight, I'd add Graf Reydrich (from South Province [Ivid the Undying]). His write-up includes a very interesting snippet about him pleading to join the circle 15 years ago (so around 569/570), but that he was rebuffed by Mordenkainen. That really intrigues me; after all Tenser was on the Circle for some time and he wasn't exactly neutral. It would be interesting to see how Reydrich's influence would be felt in the policies of the group.
Christopher: Drax! He's an NPC wizard in my game that was retired to my realm by a great player that moved away long ago to Florida and we've since lost touch. Drax had a lot of memorable moments in the game and it would be great for other players in my realm to see what they could become one day.
The final question of this round. Creighton brings up a delicious point I didn't know, (he did because Boccob knows all of course) Graf Reydrich wanted in the Circle??? That's very interesting indeed. I am supremely sure Mordy would love to have him on the team due to his political influence in the east. Maybe Bigby opposed him or goodie good, Tenser. Much to ponder here. Christopher gets to end this Ring with an Aerdian of his own. Drax of Rel Astra?!  I had to check the boxed set to be sure, but yes, Drax is an Assassin/Magic-user! While Mordy would love to have Rel Astra in his Circle, much like the South Province in Reydrich, I wonder if Drax wouldn't be rebuffed as well? Christopher however, makes reference to his home campaign which is poignant for this old school man in the chapeaux. Drax must've really been a big deal to his players if they measured up to him. Yeah I never let one of my friends have a PC in the Circle either, so they tended to make their own wizard groups to compete. That's what I like about Greyhawk, we can all share our stories and takes on the setting, they are all valid. Last thing, I do hope that Mr. Lerch can get in touch with that player again some day.
And that ends round 13! Thanks to Christopher and Creighton once again (hopefully he comes on Legends & Lore stream someday). What is in store for the next round? Perhaps another look back into the past of the Ring of Five Questions???
Posted by Mike Bridges at 8:52 PM