Tasha's Cauldron of Everything 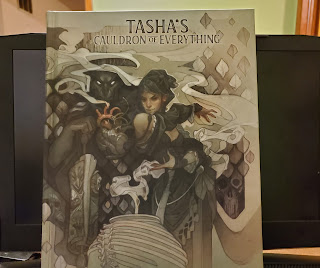 Hello Greyhawkers! I don't often do reviews, but I think the latest 5E splat book by Wizards deserves some attention from this discerning Greyhawk expert. Tasha's Cauldron of Everything has been talked about across the D&D community for some time, but I finally got my hands on it and well, news rules and crunch arguments aside (psionics, meh), I'm pleased with the entire package not to mention the numerous nods to Greyhawk throughout in this book. Not convinced fellow grognards? Let me explain...

First off, kudos to Jeremy Crawford for leading this book. Using Tasha as the authorial voice of the book at first seems like another Greyhawk swipe, but then I read the intro and you can tell it isn't uninformed. They did their research. Tasha pens a foreword introducing herself to the reader that drops names faster than a Carl Sargent sourcebook. Unless there was doubt, she is indeed Natasha the Dark, Hura of Ket and the daughter of Baba Yaga. She reminisces of her days interacting with the "original" Mad Archmage Zagig Yragerne, the Company of Seven and Mordenkainen (there is an awesome illo of her playing chess with Mordy btw). These throw-away references are not useless however. Right there at the beginning and in her boxed text comments throughout the book, a new reader may very well wonder where is Ket, who else was in the Company of Seven or what is original about Zagig, etc. Fan-service doubles as trivia teasers.

What else do I like about Tasha as a brand name character in 5E? Wizards had all of D&D to choose from and they went with an alter-ego of the Witch-Queen from the Greyhawk setting. Not one of the Seven Sisters like the Simbul, or the thousands of other NPC wizards from the Forgotten Realms, not Raistlin, nor Azalin from Ravenloft (oh wait his pic is in this book). Worst case scenario Tasha becomes a famous D&D name alongside Elminster and Mordenkainen and she grows even more, best case scenario more and more people become curious about Tasha and what she represents, want more, and we edge closer to more official Greyhawk content in the future. 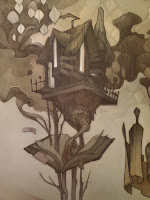 Okay enough gushing about the first part of this book. What other references can you expect to see in Tasha's? Here's a sample list just from casual perusal:
Strange technologies of the Barrier Peaks tied to the artificer class.
Clerics of Order give Wee Jas and Pholtus as examples.
Tasha jokes about spells "Mordenkainen's Bountiful Back-Patting and Heward's Hot Air" being left out of the book.
Graz'zt and Tasha illustration (not to mention the gorgeous variant cover by artist Wylie Beckert with the two).
Travel to other worlds like Oerth using the spell Dream of the Blue Veil.
Wow your friends with new spells "Tasha's Caustic Brew, Tasha's Mind Whip and Tasha's Otherworldly Guise."
Magic items: Baba Yaga's Mortar and Pestle, the Crook of Rao (includes some Iggwilv lore), the Demonomicon of Iggwilv (of course! Includes mentions about Fraz-Urb'Luu and the Tome of Zyx), the Mighty Servant of Leuk-O (plus a bad-ass illustration), and the Teeth of Dahlver-Nar (d20 effects).
No doubt there is more subtle references here, you're not going to find extensive lore on anything in a rule splat book after all, but in closing I love Tasha's. I don't know how much of it will find use in my game, but as a Greyhawk enthusiast and collector, this is a must-have alongside Mordenkainen's Tome of Foes. Yeah I'm a sucker for products named after Greyhawk NPCs. That said, if anyone at Wizards R&D is reading, I'm hoping the next splat book is presented by Tenser or Bigby. Let's see, how about Bigby's Handbook of Heroes or Tenser's Guide to Adventuring? Just a thought.
Posted by Mike Bridges at 5:53 PM

This is honestly the most positive take I have seen and I appreciate the perspective. I am on the fence about the book as I am kind of over 5e, I am happy they might be leading more folks to discover Greyhawk as a setting and maybe they will do more with it.

Great review.
I picked up a copy, as well, although mine is the mass market cover. I refuse to fork over extra cash for window dressing, even if the augmented covers are better looking; it's what's between those covers that make or break the book.
Gotta say, this is the second time WotC has gone to Oerth for the title of one of its core books, Mordenkainan first, and now Tasha, with only Volo of the FR getting the nod. What's up wit that, if the FR is the "official" stting of 5e?

Very interesting review and I'm pretty sure I'll grab a copy myself. Thanks !

David: Well Xanathar is FR too so its pretty even. But also, Tales from the Yawning Portal is a FR location, yet the content inside is over 50% GH. That hurt until Saltmarsh was used. 4E did the same kind of stealth use of GH, but this time they aren't afraid of using the words "Greyhawk or Oerth", 5E embraces it.

I've forgotten where, but in one of her chatty quotes, she references the Bandit Kingdoms, so there's that as well. I'm with you, any D&D products that reference Greyhawk (and do so without butchering canon) is nice to see.

Bigby's Handbook? I see what you did there.

casl: They are playing catch up to ya buddy!

Yeah, she references the BK in the Aristocrat patron section. It's small, but it's there.

I still need to pick up my copy at our FLGS, perhaps next weekend....