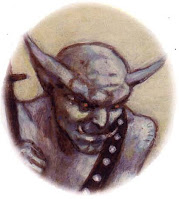 Welcome Greyhawk adventurers! I haven't done this column in a long time. If you haven't seen my previous "Let's Fight" posts it goes like this; back in the days of AD&D, it was entirely possible, but not advised, for PCs to get into combat with deities. The 1E Deities & Demigods in particular is filled with stats and rules on many pantheons from earth and literature. This template for deity stats carried over to the early World of Greyhawk products and articles thus giving DMs an option to pit their players against the gods themselves if necessary. As expected, they are damn tough but not impossible to kill. Hit points were capped out at 400, AC never went higher than -10 (AC 30 by today's rules) and most had very high magic resistances and other powers not available to characters. After sacrificing PCs in combat with greater gods like Istus, Ulaa and Nerull, let's give the players a chance at fighting someone their own, er, size? Let's fight Raxivort, god of xvarts, rats, and bats!
Raxivort the Lord of Xvartkind was once a mere mortal mortal, but through cunning, ambition, and superior capabilities he received powers from his master, Graz'zt. He then used his powers to steal from the demon prince, lead a rebellion, then run off with his riches to Pandemonium where he evidently ascended to lesser deityhood.
The Horde: Any fight with Raxivort is actually going to begin as a major encounter. The '83 boxed set says he always has companies of xvart fighters to guard him. How many is in a xvart company? I dunno, but their original entry in Fiend Folio has their number of appearing listed at 40-400. So yes, a minimum 40 guards, or an average of 200 xvart warriors. Given its Raxivort though, why not the maximum number? Sure they are only 1-1 HD and do 1d4+1, but that's a mean horde. Likewise at his beck and call, is packs of the largest giant rats (Per Monster Manual, 5-50 in a pack, so I assume a few of those) and scores of mobats. Monster Manual 2 has these mean things at 4-6 HD and a wingspan of 12'...so scores of them? That's 20-60 roughly if the DM is nice? Between xvarts, bats and rats, that's a lot of ablative hit points! Heroes better have lots of AOE attacks with them, or bring reinforcements! 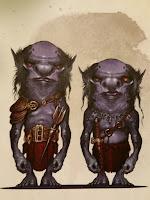 Ranged Threats: Meanwhile, Raxivort himself hides in the back of his horde (or among them?) and uses spells and ranged attacks. First off, little ol Raxi has the powers of a standard lesser god (according to the Glossography), so he will have access to heal (2 times), and cure serious wounds in a pinch, but worse, he can cast annoying stuff like improved invisibility (at will), death spell (1 time fortunately), and polymorph others (2 times)
He famously can hurl "any" knife, dagger, short sword, or similar blade with great accuracy and can make them bite as if a +4 weapon! Very deadly, especially when you consider the blue guy is equal to a 10th-level assassin. In AD&D this means if Raxi takes the PCs by surprise (remember the invisibility), then even without poison, there is a chance he can Assassinate a single character. At his level he optimally has a 1% chance to instakill an 18th-level PC. His chances increase from there, a modest 14th-level PC would have a 25% chance of dying for instance. Players best protect their healer!
Oh yes and just for fun Raxivort can shape change into a mobat form (then fly among his scores of mobats) and attack in concert with a 20' radius sonic scream that causes a save vs paralysis from the noise. That radius will be much bigger since there is scores of mobats to deal with! The PCs better wear earplugs!
Once the henchmen and guards are dealt with, and sly Raxivort is cornered, or heck, even if his horde is entirely bypassed somehow, the Lord of Xvarts can defend himself. Don't let his small size (4' tall) fool you. At AC-1 (blue chainmail) and 246 hit points, this xvart has more durability than bigger, meaner gods such as Trithereon, Iuz, and even Hextor! Raxi is also a 12th-level fighter, with an 18/00 strength, and a dizzying 4 attacks per round using his main weapon, a small yet deadly falchion: 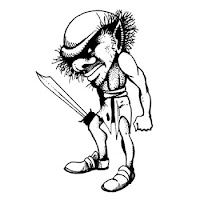 The Azure Razor: This is a +5 weapon in Raxi's hands only. Not only does it do  1d6+7 damage per hit, he can command the razor to paralyze one type of creature each day. It is not certain whether targets get a save, just don't get hit is my advice. Make sure your party is diverse! But for those he can't paralyze, he has other tricks up his sleeve, like his left hand...
Blue Flame: Raxivort can also project from his left hand a nasty variation of the burning hand spell (20' long, 20 wide at end). The blue flame is a magical fire/acid spray requiring TWO saves to avoid 5d4 damage. He can hurl this power once every four rounds and six times per day. When Raxi uses the blue flame he can only attack twice with his falchion, so there's that.
Attacking Raxivort with spells can be frustrating for players with his 40% magic resistance and 18 Intelligence and Wisdom. He is also listed as Psionic Ability "VI" which means that while Raxivort does not have psionic powers, he is also immune to them. Leave your psionicists at home for this encounter.
As a solo fight, Raxivort could reasonably be taken down by a large, well-armed, high-level group, but in his own lair among vast hordes of skittering creatures, there is little doubt this fight would end with players running in fear, and then for the rest of their lives wondering if every bat or rat they see might be a vengeful Raxivort in disguise!
Posted by Mike Bridges at 9:49 PM

Ah, the God of Hellsmurfs. Empowering this guy was not the best decision Graz'zt ever made, but he's never been a great judge of character.

Stats do look manageable for a high-level group that's come prepared with a lot of area effects to scrub off the masses of lackeys they'll inevitably face. Or maybe they could recruit their own allies. I'm sure the Lord of Cats and Dean of Owls might take an interest if approached properly.