Well met Greyhawk enthusiasts! I have a treat for you today. This is a custom magic item from my own "silver age" 2E campaign, a sentient sword named Hawksteel. To bring Hawksteel into the present. I've converted it to 5E rules. Those who use other systems will easily be able to port this item over to your game though. Now, as some of you grey beards like myself will gather, this sword is an homage to some of my favorite childhood swords. It's foremost a nod to the Mind-Sword from Hawk the Slayer, as well as a tip of the cap to the Sword of Omens from Thundercats. It's much more however.
While my friends Jayson and Brian weren't busy conquering the world with their high-level PCs (see my Greyhawk Wars campaign), we had secondary campaigns. Brian who played a wizard much of the time, was usually looking to play a cool fighter with a bad-ass magic sword. I shrewdly granted that wish to his new character Logan Konig a relative of Jayson's PC barbarian dynasty (who claimed all 5 of the Blades of Corusk). Logan finds a sentient sword in the lair of a linnorm somewhere in the Corusk Mountains. What followed was a very short lived storyline that had Logan battling renegade barbarians working for a mysterious foreign warlord who turned out to be Kas the Terrible (think Vlad the Impaler). I had greater plans for Logan and Hawksteel, but never finished the story arc. Fortunately I kept these notes. Perhaps the mysterious Hawksteel will see new life in someone's campaign. There may be more to come as well...
Note: Hawksteel is a very roleplay intensive magic item. For 5E players, I refer you to page 216 of the DMG for rules on running a sentient weapon conflict. However, whichever system you use for sentient weapons, read up on them before adding this sword to your game. Enjoy! 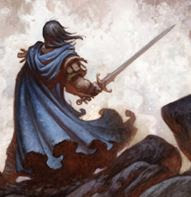 HAWKSTEEL
Weapon (longsword) legendary (requires attunement by a creature proficient in longswords)
Also known as Keenblade or Shadowkiller, Hawksteel was created by one of the fabled Mages of Power during the Baklunish-Suloise Wars. Crafted from star-fallen metal obtained from beyond the western seas, it is said the enchanting of this sword was so difficult that several Suel wizards enlisted to aid the Magi died in the process.
The sword was first wielded by the champion and personal bodyguard of the Suloise emperor. During this tumultuous time, Hawksteel foiled several assassinations and likewise dispatched many of the emperor’s worst political threats. Eventually fearing the power of the sword might be used against him, the emperor turned his champion loose on the Baklunish Empire as his new chief assassin.
As fate would have it the bearer of Hawksteel, still on a mission, went missing during the Twin Cataclysms. It is suspected the sword migrated eastward into the Flanaess, passing from one bearer to another until it was lost. Until now.
You gain a +3 bonus to attack and damage rolls made with this weapon. The blade always scores a critical on a roll of 19 or 20. If you score a critical hit with it, the target takes extra 7 damage. It has the following additional properties.
Light and Dark. You can speak the sword’s command word to cause the blade to shed bright light in a 10-foot radius and dim light for an additional 10-feet, or alternatively darkness in a 15-foot radius. Speaking the command word again or sheathing the sword puts out either effect. It has the following additional properties.
Mind Over Matter. If you are attuned to this weapon, you can use a bonus action to call the weapon to your free hand if it is within 30 feet.
Sight Beyond Sight. While you are holding the sword, you can use an action to cast clairvoyance or clairaudience. Once you cast either spell, you can’t cast it from the weapon again until the next dawn.
Shadow Jump. While you are holding the weapon, you can use a bonus action to teleport up to 60 feet to an unoccupied space you can see. Both the space you teleport from and the space you teleport to must be in dim light or darkness. Once used, this property can’t be used again until the next dawn.

Sentience. Hawksteel is a sentient chaotic neutral weapon with an Intelligence of 16, and a Wisdom of 14. It has hearing and darkvision out to a range of 120 feet.
The weapon communicates two ways. One is through magical runes that slowly appear on the surface of the blade which anyone can see. These short messages are never longer than 7 words, and are always in a language that the bearer can read. Rune messages fade within a minute of being read. The weapon also communicates with its owner through dreams and visions when it needs to communicate at length. Anytime during a long rest, or when there is a conflict of purpose, the sword can reach out to the bearer. The manifestation of these dreams varies according to the many personalities of the sword. 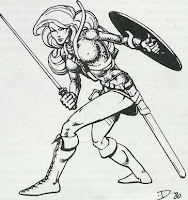 Split Personality. Hawksteel has many personalities, each with competing purposes. Each month, a new prime personality directs the weapon (this can be rolled randomly or chosen by the DM). During dream communication, multiple personalities may clash for attention, but only the prime may try to take control of the wielder in a conflict. These are the known personalities of Hawksteel.

Awesome. Definitely going to be using this.

TK: Glad to hear it!!! Don't use it too soon though. There uh, might be more to come.