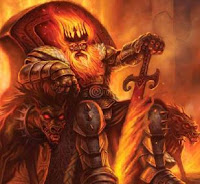 Howdy Greyhawkers! Naw, not gonna talk about Wizard's newly announced Ravenloft book, and the two remaining books left to be announced. Been there done that. No, often I stop and post some retrospective on which modules I need to collect or in this case run for my friends (Ghost Tower of Inverness and the Saltmarsh series is my most recent). It's for my own benefit, but also can inspire those in a similar position as me. Most times I prefer writing my own adventures, it is easier to remember the plot when I created it. When I'm lazy though or just want something for my players to grind, modules are always best bet. So yeah, in my roughly 37 years of DMing, here is some classic modules I need to check off my Greyhawk bucket list (caveat, I'm not including Dungeon magazine modules cause I know there's a ton of them I haven't ran):

The Slave Lords series (A0-A4, etc): This one is what led me to post this since we talked about the Slave Lords recently on Legends & Lore stream. Strangely, I collected the original 32-page modules well after I had already ran 2E Slavers into the ground. I feel that going back to the 1E AD&D originals would be more fun.

Against the Giants (G2-G3): I ran parts of G1 the Steading of the Hill Giant Chief as a teen long ago before I knew what I was doing, but I never really got to the high level sections, Hall of the Fire Giant King and Glacial Rift of the Frost Giant Jarl. Now would be a great time to bash giants!

Drow series (D1-D3, Q1): Okay for that matter I've never ran Vault of the Drow or rest either. I love reading through them, but I've yet to try and see if my friends want to play an Underdark campaign. Our games tended to revolve around mega-dungeons like Greyhawk Ruins or Maure Castle, and political themes like the Greyhawk Wars. In the very least I'd like to use the Vault given the wealth of lore at my fingertips.

Lost Caverns of Tsojcanth (S4): This is one dungeon that I know fans like because of the backstory, but I think I tried to run once and gave up because of the mountain exploration. I want to just get to the main parts and run it someday!

Secret of Bone Hill (L1): I have never ran any of Len Lakofka's modules and that's a sad admission given that I met him late in his life and now he is no longer with us. I must run a Lendore Isles module someday! (maybe Assassins Knot as well)

Isle of the Ape (WG6): I'm not sure why, maybe its cause there's a new Kong movie coming out, but how have I never ran this module? Me and my friend Jayson have been monster movie fans since we were old enough to tie our shoelaces. This is on the list. 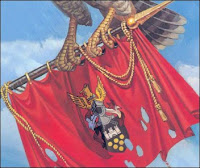 Falcon's Revenge (WGA1): Okay last one, I threw this out cause I know the Falcon trilogy isn't popular, but I somehow never owned them when they first came out and let me tell you, these are set in Greyhawk City, and I used every bit of City of Greyhawk lore I could get my hands on. So basically I need to run one of these and see if its truly as awful as I've heard (can't be worse than Doomgrinder and I ran that!).
Posted by Mike Bridges at 3:30 PM

Regarding WGA1, I don't understand the concept of running a bad module or seeing if a module is bad. It's pretty easy to read a module and know immediately if things need changing or if it's a lost cause. Diamonds in the rough are as good as classics with a proficient DM.


The Falcon series is a little railroady, but has decent plot and dungeons. Make Nestor a helpful and trusted ally, beef up the cultists, and run the city more of a Hommlet sandbox.

The Falcon series needs about as much TLC as the Giants series. The difference is G1-3 need fleshing out and customizing, while WGA1-3 needs modifications and customizing.

Cody: Great advice! I don't doubt I would make modifications as I go. But it just troubled me that popular opinion had kept me from even buying or perusing this module to being with. Yes in the right hands its got to be better than 50% of D&D adventures out there (much less Greyhawk) Thanks the response!

I've never ran or played WG4 Forgotten Temple of Tharizdun after all these years. Anyone volunteering to run it?

Scott: I did run that one as a sequel to Maure Castle. Don't ask. After reading Joe Bloch's deep dive on that module, I would have a whole new mindset going into that one.