Greetings all and welcome back to Greyhawkery! As I write this post, we are going through another Virtual Gary Con 2021, and the gaming and streaming for the World of Greyhawk has never been more successful. While the community games into the future, I've been nostalgically looking back to the past to muse on how far this setting has come. My favorite source is the pages of Dragon where one can see the evolution and even launch of the products we all now take for granted. Sit back and read some clipped advertisements I found from this hallowed magazine. Enjoy! 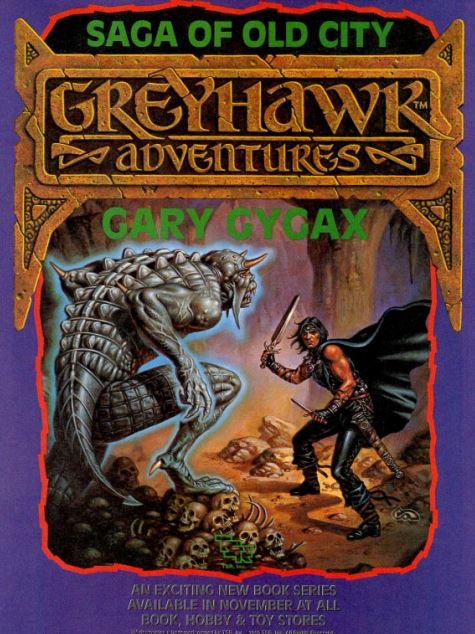 I think it's safe to say Saga of Old City is Gygax's best and first novel set in Greyhawk. The Gord series held a lot of promise as it came out around the time D&D novels was red hot, especially the Dragonlance series. Because of this, Saga got a big push back in winter 1984/1985. This full page, color ad was evocative enough to grab readers. 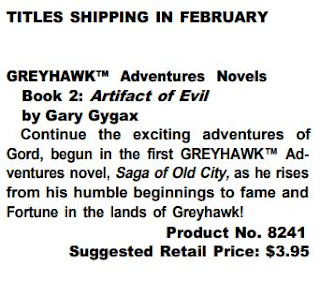 In winter of 1986, Gygax put out his second novel in the Gord series with Artifact of Evil. It's too bad that he would have to finish the series post-TSR. Look at that retail price! 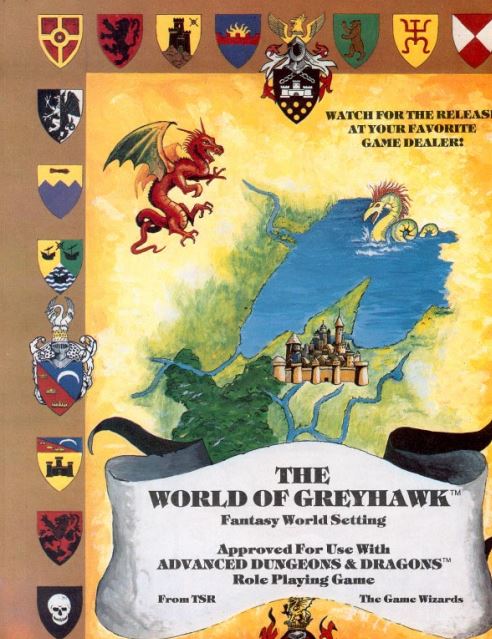 Here's an old school ad from Dragon #37. Again, Gary went all out with a full color ad in his usually all black & white magazine. To give us a taste of the Greyhawk Folio cover would've been a treatment back in 1980. 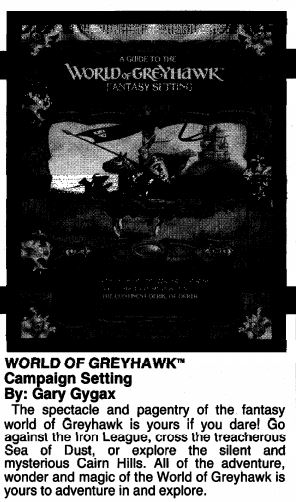 In contrast, this ad in Dragon #80 for the updated 1983 World of Greyhawk boxed set is disappointingly small, black and white and just has a nice blurb to hook you into buying it. I scoured the back issues for a full page color ad of this boxed set and couldn't find it. If anyone knows, let me know. I assume if one already had the Folio, this small ad would be enough to remind you. I had neither Dragon #80 nor the Folio. It is merely fate that I'm here today as a lifelong Greyhawk gamer. 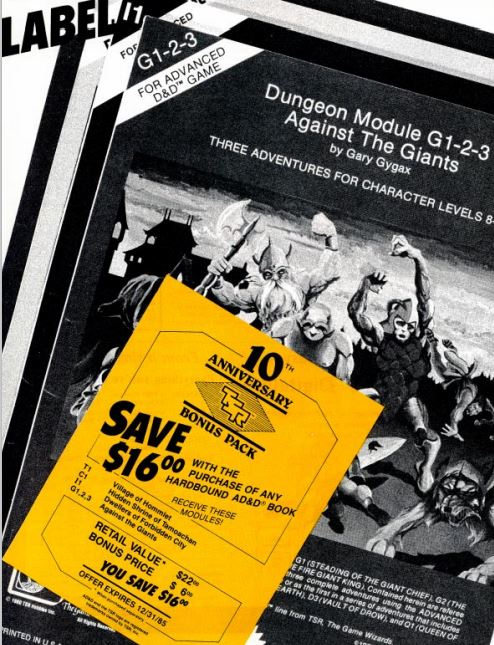 This ad from Dragon #94 in 1985 is fun one. G1-2-3 Against the Giants is one of the first modules I ever owned, but damn if I had saw this ad, well I could've had that mod and even more if I just bought a hardback D&D book. I highly doubt a sale like this will happen again. 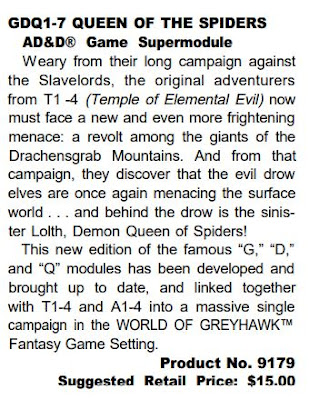 This blurb is from the coming soon section of Dragon #112. What is shocking to me about this ad, is that the Queen of the Spiders was supposedly linked to the Temple of Elemental Evil and Slave Lords series?!? That's an adventure path on steroids. I cannot imagine running one PC group through 15 modules. I know there will some Greyhawk grognards who eschew this proposed storyline. Perhaps the ad department of TSR just wanted to push sales of the modules by tying them all together. D&D players are collectors and would have to get an entire story. Maybe they were right, because as we saw in 2E going forward, storylines were not as closely tied together so some inevitably ended up more popular than others. 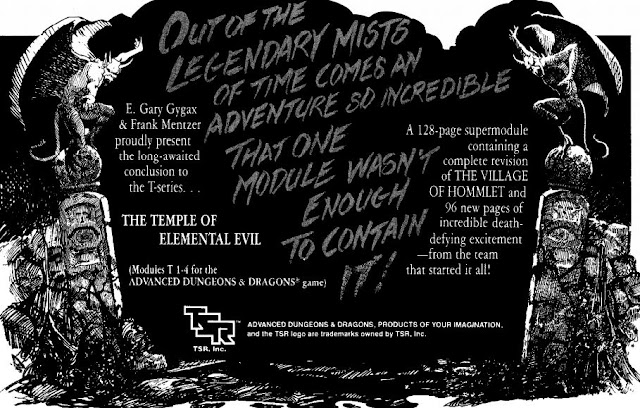 Speaking of the Temple of Elemental Evil, this last ad here is from Dragon#100 (coincidentally the issue that debuted Gord) and is for the compiled T1-4 TOEE super-module that is referenced above. Again, the ad is black & white, but it is well made and much more evocative. It takes hints of the gargoyles on Keith Parkinson's amazing cover and throws in some hype text to catch your attention. This would entice me to get the Temple since I never owned the original mods. I am curious that the blurb says this is the "conclusion" to the T-series. Does this Frank Mentzer supermod have story info Gygax's books doesn't? You'll have to get them all to find out I guess!
Posted by Mike Bridges at 1:51 PM

This thread at the Acaeum may also catch your eye for other early TSR ads from The Dragon and other early RPG periodicals, Mike!: https://www.acaeum.com/forum/viewtopic.php?f=1&t=4298.

It was great to chat with you again this evening to wrap up the Greyhawk track at GaryCon! =)

Allan: Thanks for the link, and yes it was the most amazing panel I've ever been on. Can't wait to see you again.