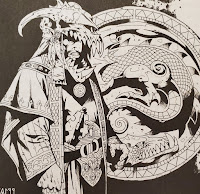 Greetings Oerthian loremasters! Today I present a treat from my epic 3.5e campaign vault. One of my favorite books from this era is the 3e Deities & Demigods. Not only does it cover the core Greyhawk gods, it gives extensive stats on them, much like 1e did back in the day with the original Deities book. Mind you, hardly anyone ever bothered to fight deities, but this book started an interesting deity rank system (0 is quasi-deity, 1-5 is demigod, etc), and it goes into delightful description into salient divine feats and rules on remote communication. These alone can make running a cult of Vecna or Nerull scarier. For example, if you are in Vecna's temple, he sees you, if you have his eye or hand, he knows it, or if you even say his name out loud, he hears you! Good stuff for roleplaying.
All this leads to my ill-fated, but very fun epic campaign. This is a long running campaign that me and my friends still reminisce and argue about to this day. The top characters ended in the 30th-level range, and a few may have even attained 0-5 divine ranks. One such adventure during this campaign led the players to take on the Slave Lords (as presented in the 2E sourcebook Slavers) albeit a more epic version of this power group. The end boss of course was the Cult of the Earth Dragon. But this is an epic campaign, so yes, despite all rationality, I also made the PCs fight the actual Earth Dragon in Mt. Drachenkopf.
I don't recall if they won or ran away, it doesn't matter, but in order to facilitate this epic encounter, I had to build the Earth Dragon from scratch using Slavers, and the 3e Deities & Demigods. Disclaimer, I'm not an expert at D&D monster creation, so my math may not check out. It's been two editions ago though, so do what you can with this stat-block. So without further ado, here is my 3E Earth Dragon. Enjoy! 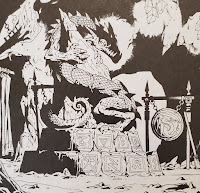 I just recently ran A3 and established that the "earth dragon" was really just the real ankylosaur Wimpell Frump had seen before casting an illusion of one. So many different things to do with the Earth Dragon!