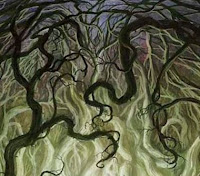 Howdy Greyhawkers! Another new bit of content I'm trying out for GREYHAKWERY is some original (or so I think) 5E monsters. One thing that is nice about the most recent edition of D&D is how easy it is to create variations of existing monsters, and all you need is the core Monster Manual and an imagination. My motivation for this particular column is to come up with some creatures for places I regularly write about, Ull and the Sea Princes for example, but I imagine these creatures can be placed in any area of the Flanaess. Today's monster for example came to mind because of the Bramblewood Forest in Ket. One disclaimer before I get to it, this monster has not been play-tested or anything, I'm just throwing it out there. So, if someone has a tweak or fix, tell me in the comments. Now, onto the Briar Golem!
BRIAR GOLEM (5E)
The lesser-known briar golem is fashioned from an enormous mass of thorny brambles and vines. Vaguely appearing as a large humanoid shaped figure, this golem is often mistaken for a shambling mound. When moving, the briar golem shuffles and lurches across the ground, blending in with local foliage if motionless. Unlike other golems, the briar golem is capable of self-repair by drawing on vegetation around it, often leaving an area blighted after it moves on. Imbued with the spirit of an earth elemental, a briar golem that breaks free of its creator will remain motionless and brood, occasionally lashing out at anything that moves.
BRIAR GOLEM
Large construct, unaligned
Armor Class 12 (natural armor)
Hit Points 75 (9d8 + 44)
Speed 30 ft.
STR 17 (+3)
DEX 9 (-1)
CON 18 (+4)
INT 3 (-4)
WIS 8 (-1)
CHA 1 (-5)
Damage Immunities poison, psychic; bludgeoning, piercing, and slashing from nonmagical weapons that aren’t adamantine
Condition Immunities charmed, exhaustion, frightened, paralyzed, petrified, poisoned
Senses darkvision 60 ft., passive Perception 9
Language understands languages of its creator but can’t speak
Challenge 5 (1800 XP)
Condition Immunities charmed, exhaustion, frightened, paralyzed, petrified, poisoned
Senses darkvision 60 ft., passive Perception 9
Language understands languages of its creator but can’t speak
Challenge 5 (1800 XP)
Thorny Body. At the start of its turn, the briar golem deals 4 (2d4) piercing damage to any creature grappling it.
Regeneration. The briar golem regains 5 hit points at the start of its turn. If it takes cold, fire, or necrotic damage, this trait doesn’t function at the start of the briar golem’s next turn. The briar golem is destroyed if it starts its turn with 0 hit points and doesn’t regenerate.
Plant Camouflage. The briar golem has advantage on Dexterity (Stealth) checks it makes in any terrain with ample obscuring plant life.
Immutable Form. The golem is immune to any spell or effect that would alter its form.
Magic Resistance. The golem has advantage on saving throws against spells and other magical effects.
Magic Weapon. The golem’s weapon attacks are magical.
ACTIONS
Multiattack. The golem makes two slam attacks. If both attacks hit a Medium or smaller target, the target is grappled (escape DC 13), and the briar golem uses its Engulf on it.
Slam. Melee Weapon Attack: +6 to hit, reach 5 ft., one target, Hit: 12 (2d8 + 3) piercing damage.
Engulf. The briar golem engulfs a Medium or smaller creature grappled by it. The engulfed target is restrained, and it must succeed on a DC 13 Constitution saving throw at the start of each of the golem’s turns or take 12 (2d8 + 3) piercing damage. If the golem moves, the engulfed target moves with it. The briar golem can have only one creature engulfed at a time.
Posted by Mike Bridges at 6:56 PM

I'm not the biggest 5e buff by any means but that looks fine to me mechanically.

FWIW, I found 4E to be the most satisfying edition for creating homebrew monsters in. Must have done a thousand of them over the years the game was peaking. Of course, it helped that actually running monsters as the GM was actually an interesting tactical challenge in a way I haven't found any other edition achieved.

If I am not mistaken, 4e was designed to work very well with minniatures, making it a "hybrid" between a wargame and a RPG...

The same can be said of 3.0 and 3.5. The adoption of a gridded map and tightly codified movement and area effect rules over previous editions more "theater of the mind" approach makes all of the Wizards of the Coast editions much more miniatures friendly than the game was in the TSR days. Which is ironic, considering the earliest version of D&D had some pretty close ties to tabletop miniature wargaming.

This thing is fast and has multiple attacks. Nasty!