Ull: Land of a Thousand Villains - Nimhon the Despised 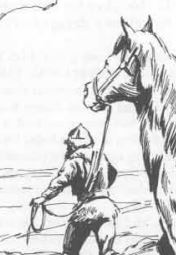 Welcome back fans of Greyhawk! It's summer, there's holidays, haven't really been working on anything new, but it's good that I have my ongoing Ull: Land of a Thousand Villains to fall back on! In fact, this latest entry in my NPC catalog was written back in the winter-spring. Nimhon the Despised was written with low level play in mind. Ull like anywhere in Greyhawk, is a place that can support all levels of game play, but in my opinion low-mid level campaigns are the most fun. For example, PCs should struggle to survive and get around in Ull. To that end, all one needs is a horse. What could go wrong?

“Ull can seem rather boorish and backward to visitors from the east. However, one universal truth that all cultures can agree on is horse thieves are scum of the Oerth”.

Northern Ull is well-known for its vast herds of horses, bred and trained to be the hardiest and most dependable in all the Baklunish West. This is a fact that has led many traders, armies, and adventurers from all over the Flanaess to go out of their way to acquire one of these fine animals. While there is a lively horse-market in Ulakand, supply never keeps up with demand. The nomadic families of Ull treat horse-ownership like a religion, so there is no greater taboo than horse thievery. Horses taken in combat is considered an honorable act, and freely giving one’s mount to another is also a sign of respect if not outright acceptance into a tribe. That said, there is less a stigma against stealing from and selling stolen horses to foreigners. This is where Nimhon the Despised thrives.

Nimhon has no family name. He is a nomad outcast who many whisper was originally a member of the vaunted Jadrun Khanate, though such open claims often result in a head on a pike. Nimhon is called the Despised due to his reputation throughout Ull as a shady horse-trader and smuggler. A skilled ranger and master horse-rider, Nimhon, mainly roams the southern and eastern fringes of Ull, often along the Banner Trail in the shadow of the Barrier Peaks. He can be found venturing into villages and towns along this trail, such as Semust and Kurukand trading stolen horses and leather goods to unwary foreigners and unscrupulous locals. Nimhon also frequently trades with the reclusive Yorodhi hillmen in the south, who do not fear the ranger as they do Ull’s marauding warbands.

Though he predominantly steals from foreign caravans and unsuspecting travelers, Nimhon has still made enemies of several Uli warbands and a few smaller khanates, for thieving their prized horses. He does not care that he is despised by his kinsmen, and even takes pride in liberating fine horses from those he deems undeserving. Nimhon is considered cowardly by Ull society. Since he generally works alone, Nimhon does not fight fair and if necessary, he will drop everything he owns to evade capture. Naturally when he has lost his pursuers, the wily ranger will always circle back and get revenge, or in the very least steal back his belongings.

DM’s Campaign Notes: Nimhon knows the land well and is adept at stealth and trailing potential targets. He is resourceful, often using distractions and at times minor magic items to help sneak into caravans and camps undetected. Given his ranger background, Nimhon is uncanny at handling horses, sometimes they come to him as if he speaks their language. Despite his reputation as a coward, he is trained in all bows and light weapons, and will not hesitate to kill if there is no other option. Nimhon also reputedly sells stolen horses to the enigmatic Yellow Cartel for use in their drug cultivation and supply line. This unspoken arrangement perhaps gives Nimhon a degree of safety in Ull.

Nimhon the Despised makes a good low-level foil for a wilderness type campaign. He is not a real threat to most adventuring bands, but he can make a good recurring character to antagonize the heroes. If dealt with diplomatically, Nimhon can be a source of gear, information and even direct the PCs to even more dangerous encounters.

Certainly can't argue with that opinion of horse thieves.